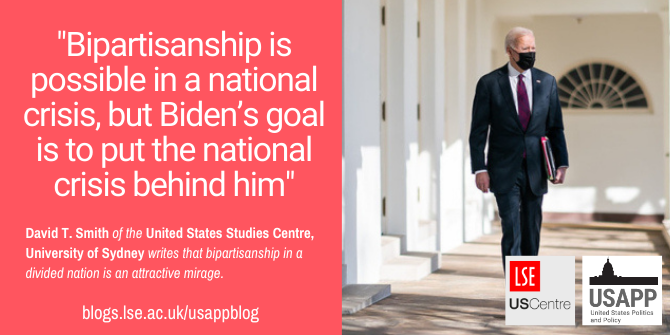 Building Back Better: Bipartisanship in a divided nation is an attractive mirage

With Donald Trump now largely absent from the national stage, there has been greater talk of the potential for a return to bipartisanship between Democrats and Republicans in Congress. As part of our Building Back Better series, David T. Smith writes that while there has been a brief revival of bipartisanship in response to the COVID-19 pandemic, the rise in partisan polarization over the last three decades means that cooperation in Congress on anything else is very unlikely.

Joe Biden repeatedly promised a return to bipartisanship in his 2020 presidential election campaign. Claiming decades of experience in negotiating with his Republican opponents in the US Senate, Biden appealed to people exhausted by political polarisation. He urged Republicans along with other Americans to reject Trump’s re-election and return to political normality, where civility reigns and cooperation is possible.

But polarisation in the Trump era wasn’t an anomaly. It was a continuation of trends that have been visible for decades, and it won’t be reversed by Trump’s exit from the White House. Polarisation is even worse in Congress than outside it, and with the smallest Congressional majorities now operating since the 1930s, there is acute pressure on both sides not to break ranks.

Biden grasped this dynamic quickly, rejecting a Republican counteroffer to his $1.9 trillion American Rescue Plan that was less than a third of the size. The plan passed Congress through the process of budget reconciliation, which requires a simple majority in the Senate rather than the three-fifths needed to break a filibuster. Democrats will not be able to use the same process for Biden’s ambitious plans to rebuild American infrastructure, or for voting rights legislation that would counteract Republican attempts to make voting harder.

Bipartisanship isn’t impossible in America. Just last year, legislators on both sides reacted to COVID-19 by passing stimulus packages that were bigger than anything Biden is proposing now. But this reflected a unique, short-lived consensus between the parties about the nature of the emergency they were facing. That consensus evaporated within months.

The best-known measures of polarisation in Congress come from the long-running Voteview project, currently hosted by UCLA’s Department of Political Science. Using a procedure called DW-NOMINATE, Voteview assigns ideological positions to every member of Congress since 1789 based on their voting records. Republicans and Democrats have been getting more ideologically polarised since the mid-70s, and the last decade has seen record gaps between the average left-right scores of the two parties (Figure1). There used to be a big overlap between conservative Democrats and liberal Republicans, but by 2012 that had completely disappeared, and since then the most liberal Republican in Congress has always been to the right of the most conservative Democrat. 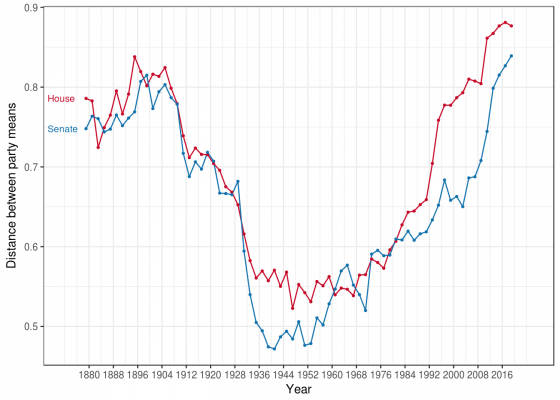 One of the factors pulling Democrats to the left is the historical decline of Southern Democrats, as conservative white Southerners moved to the Republican Party following the Civil Rights and Voting Rights Acts. This realignment happened in conjunction with the right-wing ascendancy in the Republican Party that began with Barry Goldwater in the 1960s and culminated in Ronald Reagan. Conservative institutions from the NRA to the Southern Baptist Convention also had right-wing revolutions in the late 1970s, pushing Republicans further away from their Democratic counterparts.

Bill Clinton was the first Democrat to win the White House after Reagan, and he and fellow Southerner Al Gore were still able to find pockets of Southern support in the 1990s. But the 1994 midterm elections saw Republicans take the House of Representatives for the first time in 40 years, led by the right-wing radical Newt Gingrich. Gingrich’s uncompromising style of politics, which included a disastrous shutdown of the federal government, created the template for the Tea Party backlash against Barack Obama. Meanwhile Democrats, after losing their last rural conservative voters in the 2000 election, increasingly embraced liberal causes once seen as politically risky, such as same-sex marriage, gun control and Black Lives Matter. In both parties, many legislators regarded as “moderates” have retired and been replaced by new members more aligned with the party’s current direction.

Biden is so far not facing a Tea Party-style backlash. It’s still early days, but by the same point in Obama’s Presidency the right-wing opposition was already out in the streets against his stimulus package and healthcare plans. Biden couldn’t get any Republican votes for his American Rescue Plan, but Republicans have been relatively quiet in their opposition, instead focusing on red-meat issues such as border control and political correctness in children’s books.

This might signal a quiet acceptance by Republicans that even their supporters are no longer moved by outrage over government debt and “big spending”, especially since Donald Trump never seemed to have a problem with it. Biden is holding out hope that some Republicans can be persuaded to support a massive new infrastructure plan, but this seems unlikely. The Republican Senators who were most willing to side with Democrats against Trump were also those most opposed to new infrastructure spending when Trump proposed it.

Biden may not have much time to court bipartisanship. Democrats will have to outperform nearly every historical precedent to hold onto either house of Congress in the 2022 midterms. Biden has so far avoided debates about abolishing the filibuster, which would make it easier, though still difficult, to pass major legislation. Some argue this is necessary for Democrats to make the whole political system fairer and give them a chance of winning in a game tilted against them. It would potentially allow Democrats to end partisan gerrymandering and add DC and Puerto Rico as states (though that may be possible even with the filibuster still in place).

Biden’s nostalgic affection for Congressional traditions might not survive the first year of his presidency. Bipartisanship is possible in a national crisis, but Biden’s goal is to put the national crisis behind him. To do that he first needs to hold his own party together in Congress. Bringing the country together can wait.

Note: This article gives the views of the author, and not the position of USAPP– American Politics and Policy, nor of the London School of Economics.

Building Back Better: Bipartisanship in a divided nation is an attractive mirage