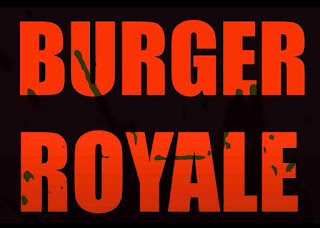 Meet "Burger Royale" - a short animated teaser/trailer written, directed and produced by Escape Studios' animation student Gary Roche.  Above is the festival cut, with original music by composer Stuart Bramwell.  "Burger Royale" has already won fifteen festival awards, as well as many festival nominations and selections.  Burger Royale tells the story of a hungry drunk who walks into a burger joint one night only to find, to his horror, that he is on the menu.
Burger Royale

Burger Royale tells the story of a drunk who walks into a burger joint one night only to find, to his horror, that he is on the menu.
Inspiration
Burger Royale was inspired by the low budget horror movies of the 1970s and1980s such as "The Texas Chainsaw Massacre", "Halloween" and "The Evil Dead".
Gary Roche
After pitching the project at Escape Studios in the Spring of 2021, Writer-Director Gary Roche worked with a number of animation students to complete the film; all of them worked in their own time after the formal end of studies in the 2021 Summer Term to get the project completed.
Independent Film
Burger Royale is a proof-of-concept for an independent animated feature; finance and distribution options are currently being explored to take the project forwards to commercial markets.
Burger Royale Credits
Festival Success
Burger Royale has won 15 festival awards, including prizes at the Toronto Independent Film Festival, the Austin International Film Festival, Cult Critic Movie Awards, Cairo Indie Short Film Festival, Phoenix Shorts, Virgin Spring Cinefest, Druk Film Fest, World Film Carnival Singapore, Calcutta International Festival, and Black Swan Film Festival.
IMDB
You can find Burger Royale at the IMDB here.
The Escape Studios Animation Blog offers a personal view on the art of animation and visual effects. To apply for our BA/MArt in 3D Animation, follow this link.
To apply for our storyboarding evening class, visit this page here. For the next 12 week animation course, click here.
Source: escapestudiosanimation