I was lucky enough to be one of the first Americans to travel to France when the country reopened for international tourism earlier this month. As a refresher, Americans can now travel to France so long as they’re vaccinated against COVID-19 or bring a negative COVID-19 test taken within 72 hours of departure.

I took the TGV train from Paris to Nice a few days ago and reported on my experience. Here, I’ll run you through everything you need to know about riding French rail during the coronavirus pandemic.

Get the latest points, miles and travel news by signing up for TPG’s free daily newsletter.

Riding French rail from Paris to Nice during the pandemic

TGV service was mostly business as usual, but you should know what to expect before you hop on board. This is especially true if you’re weighing whether you should take the train, drive or fly to your destination in France.

But before I discuss, it’s important to understand a couple of key French rail terms that I’ll use throughout the article.

The first is SNCF, short for “Société nationale des chemins de fer français” . SNCF is the equivalent of Amtrak in France. It’s a state-owned rail company that operates domestic and international trains within and around France, including the route from Paris to Nice.

SNCF runs TGV service. This is short for “Train à Grande Vitesse,” or “high-speed train” in English, and is SNCF’s high-speed service. It runs between most major French cities and on international routes.

I purchased my train ticket online on the SNCF website a few days before I departed for France. Normally I would’ve booked earlier, but I decided to book last-minute because of the uncertainty around France’s border reopening plans.

My ticket from Paris to Nice cost 101 euros, which is just over $122 at the time of writing this article. Train ticket prices — like airfare — are subject to change on long-haul routes with changes in demand, etc.

Booking the ticket online was pretty straightforward. All you have to do is input your desired itinerary and select the time that works best for you. On the Paris to Nice route, you can choose between Inoui and Ouigo TGV service.

Inoui is the full-service product while Ouigo is akin to a budget carrier. Ouigo only operates second-class, has stricter luggage restrictions and doesn’t have a dining car, but generally has lower fares. I booked an Inoui ticket since it was my first time riding an SNCF train and I wanted to report on the full experience.

It’s also worth noting that Inoui doesn’t have baggage fees — according to the rail operator’s website, as long as you can carry it, you can bring it without an extra fee.

I was sent a mobile ticket shortly after booking and printed a physical ticket at the train station at a self-service kiosk. Make sure to flag the confirmation email in your inbox as you’ll need to scan your ticket to get on the train.

Related: 14 of the most scenic train rides on Earth

Boarding the train in Paris

My train departed from Gare de Lyon station at 11:26 a.m. local time, and I arrived roughly 20 minutes before departure. The train station was remarkably busy and there were trains going all over France.

Gare De Lyon station has a couple of shops, bakeries and restaurants, so you can grab a snack or magazine before your trip. There are automated kiosks around the train station that you can use to print your pre-booked tickets, buy tickets and make changes.

I looked at the departure board to find which track my train departed from. You can board your train until two minutes before departure, but I recommend boarding early to avoid any mishaps.

Boarding was completely contactless — I just scanned my ticket at an unmanned gate and was on my way. It was an incredibly seamless experience when compared to airport security.

Onboard experience on the TGV

I boarded the train and quickly found my seat. In second-class, legroom is plentiful and the tray table is enough for my 15″ MacBook Pro, but the seats could have been a bit wider. There’s a single outlet per pair of seats, so try and grab the window if you need to charge your laptop. 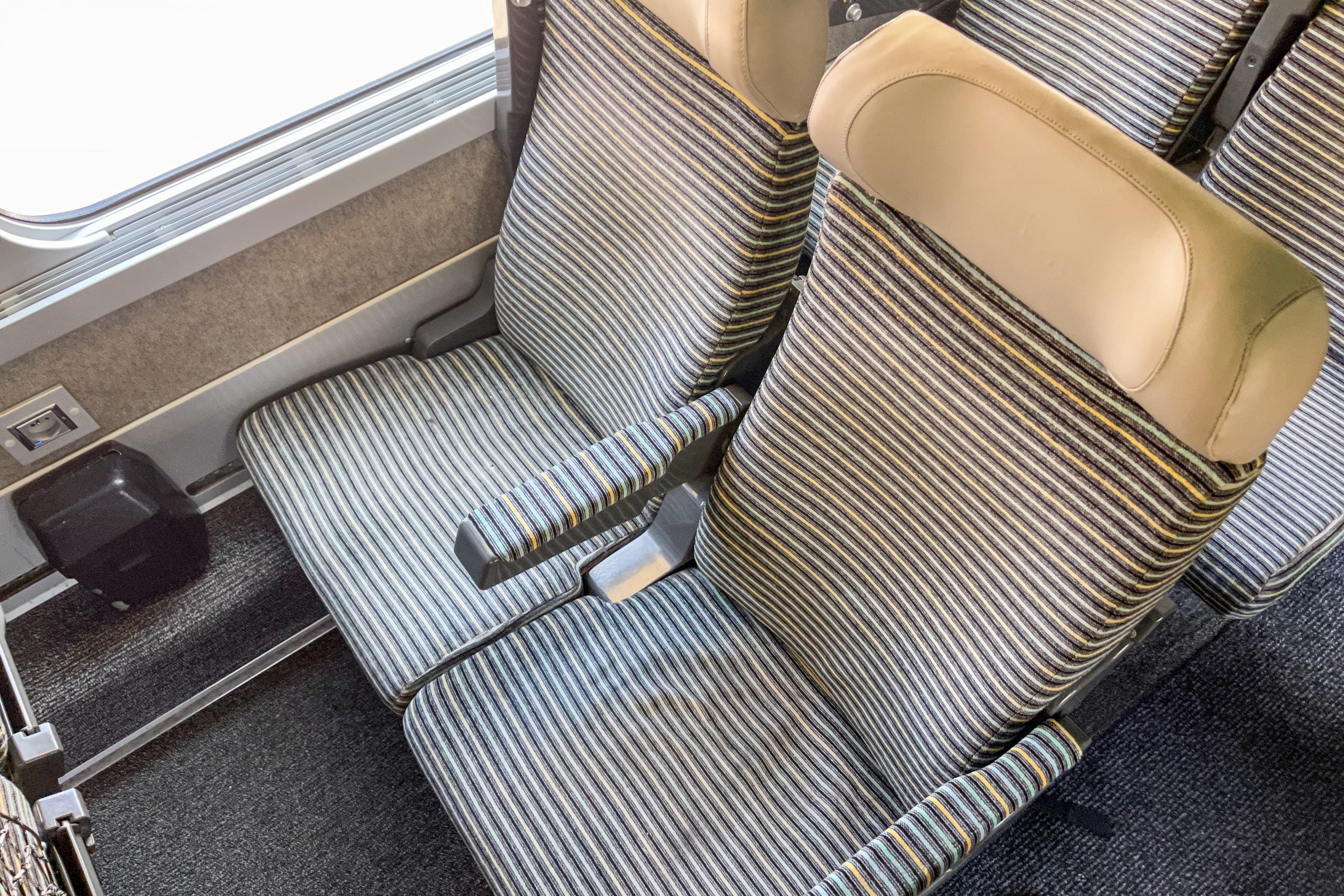 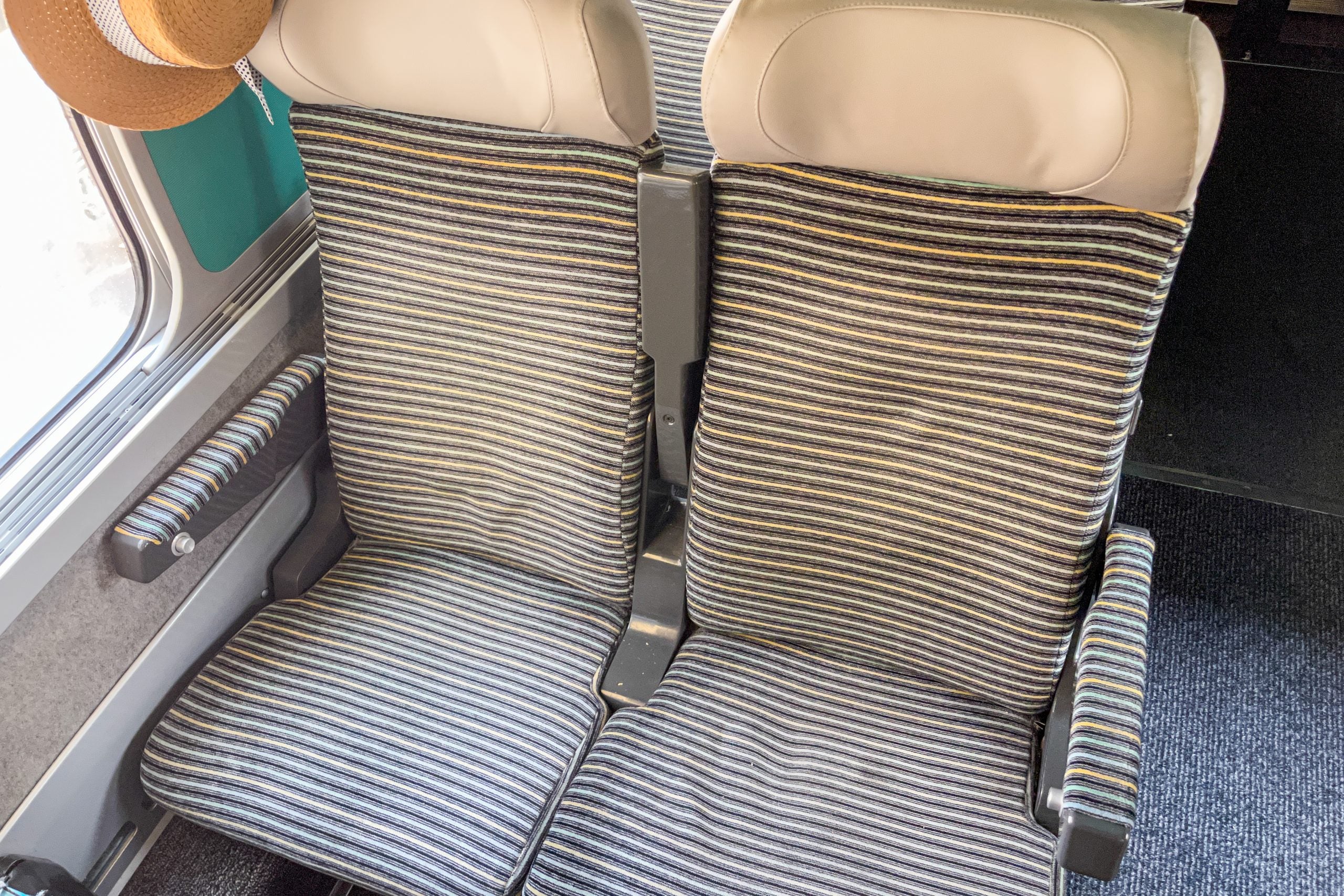 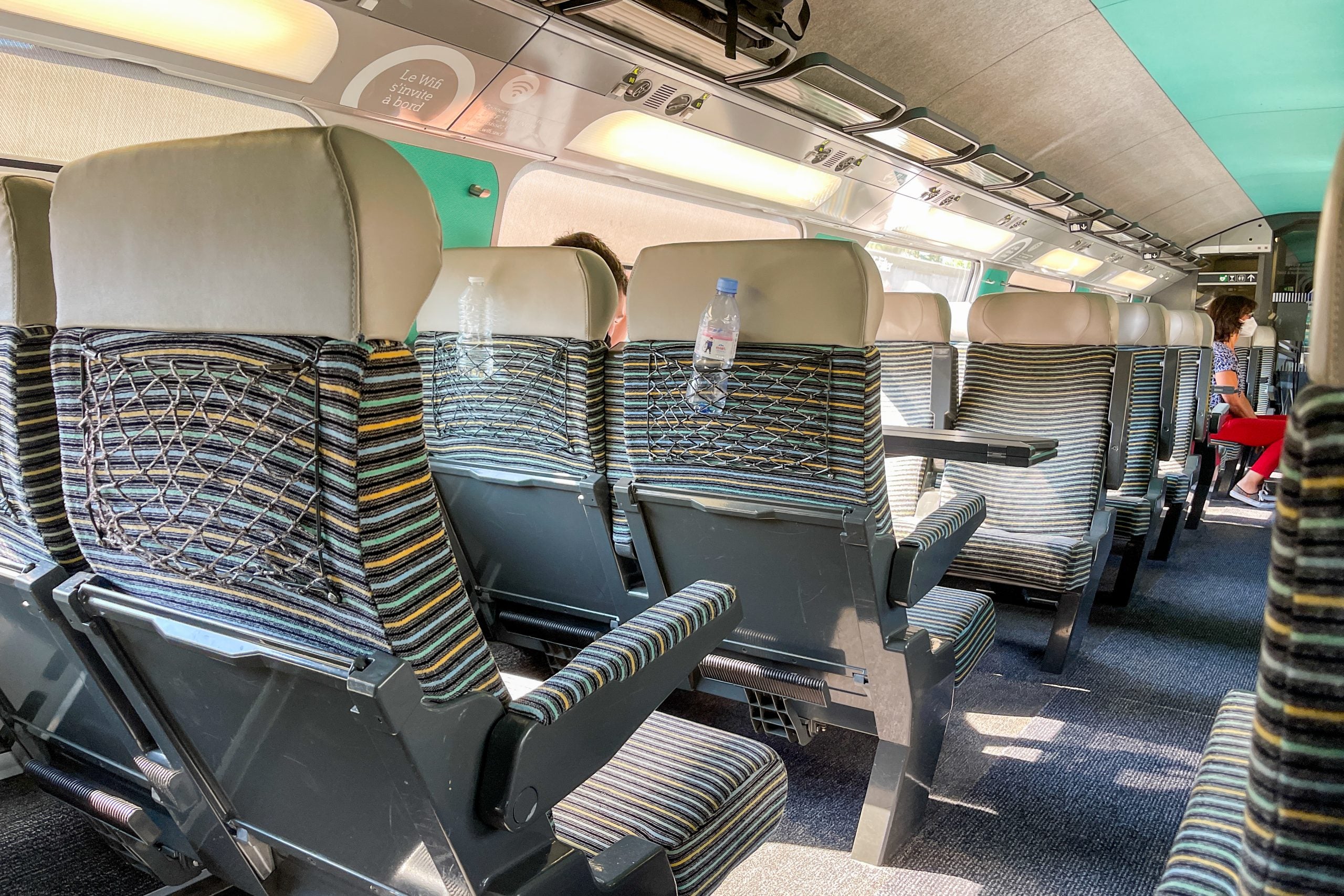 After we were on our way, a conductor came around to scan our tickets. After this, I went to the dining car to grab an espresso and a soda for the ride. You can purchase food and drink from the car, but you must bring it back to your seat. 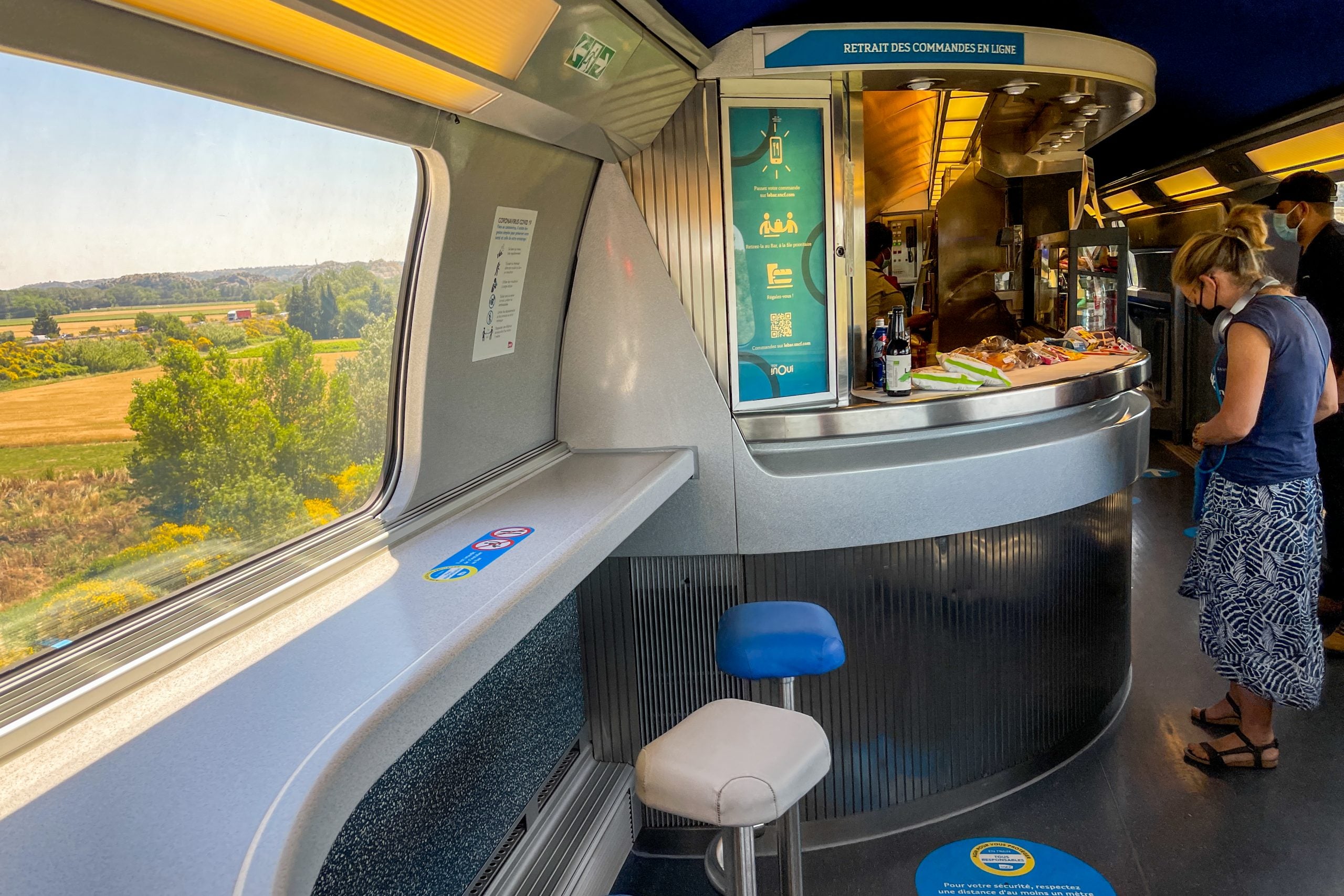 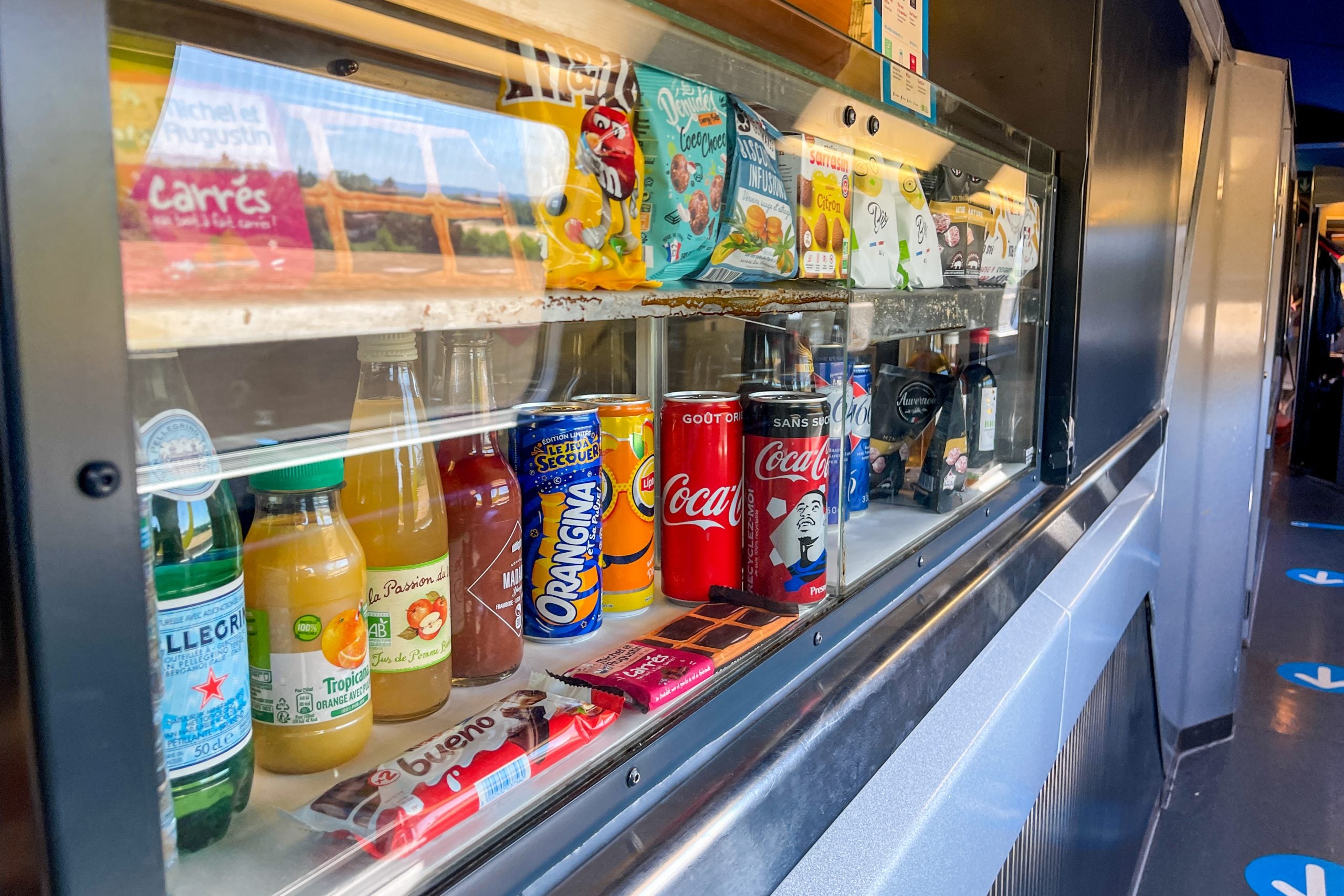 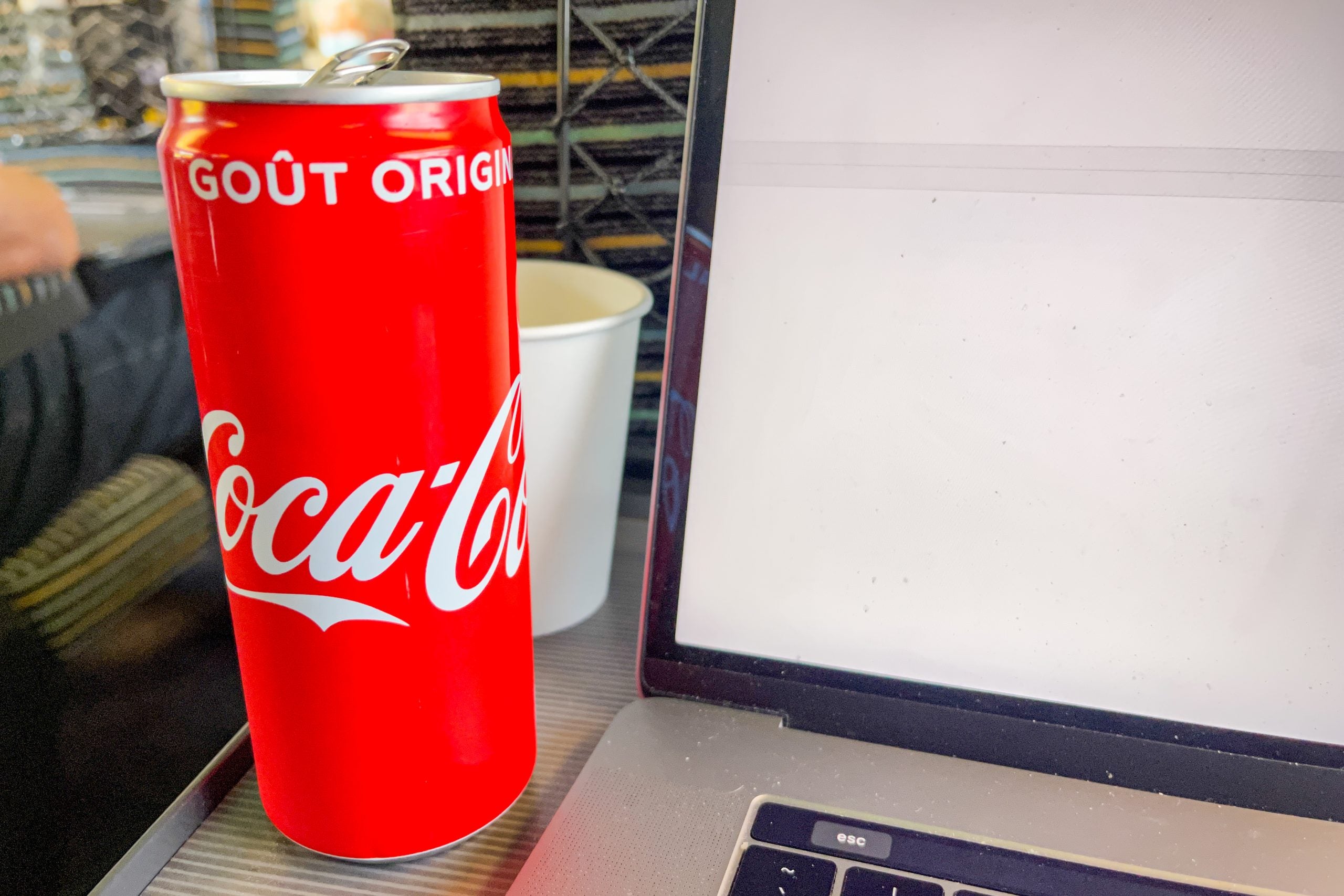 The train was surprisingly crowded for our journey to Nice, but not completely full. Many passengers switched seats so couples and families could sit together. All passengers wore masks for the entirety of the trip. That said, you should know that there are no blocked seats or capacity restrictions on SNCF trains.

The rest of my ride was uneventful — but I’m not complaining. The nearly six-hour train ride had only a handful of stops in the South of France. The ride was smooth and the free internet was stable enough to work through the trip without issue.

The biggest perk? Beautiful views of the French countryside.

Related: Why trains are great for travelers who want to reduce their carbon footprint

Soon enough, my train was pulling into Nice’s Gare de Nice-Ville train station. This station is much smaller than Gare de Lyon, so it was easy to quickly hop off the train and catch my awaiting Uber. 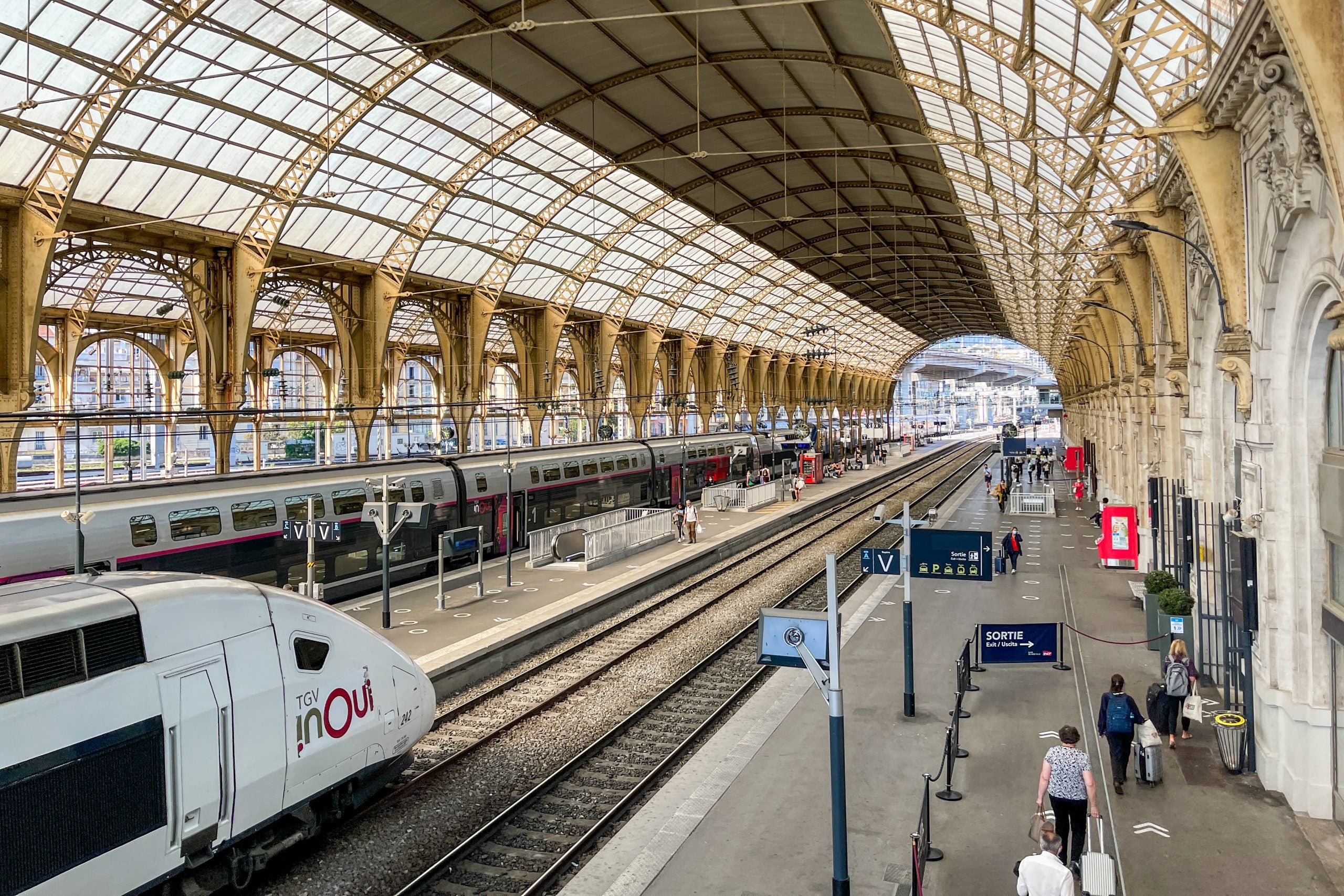 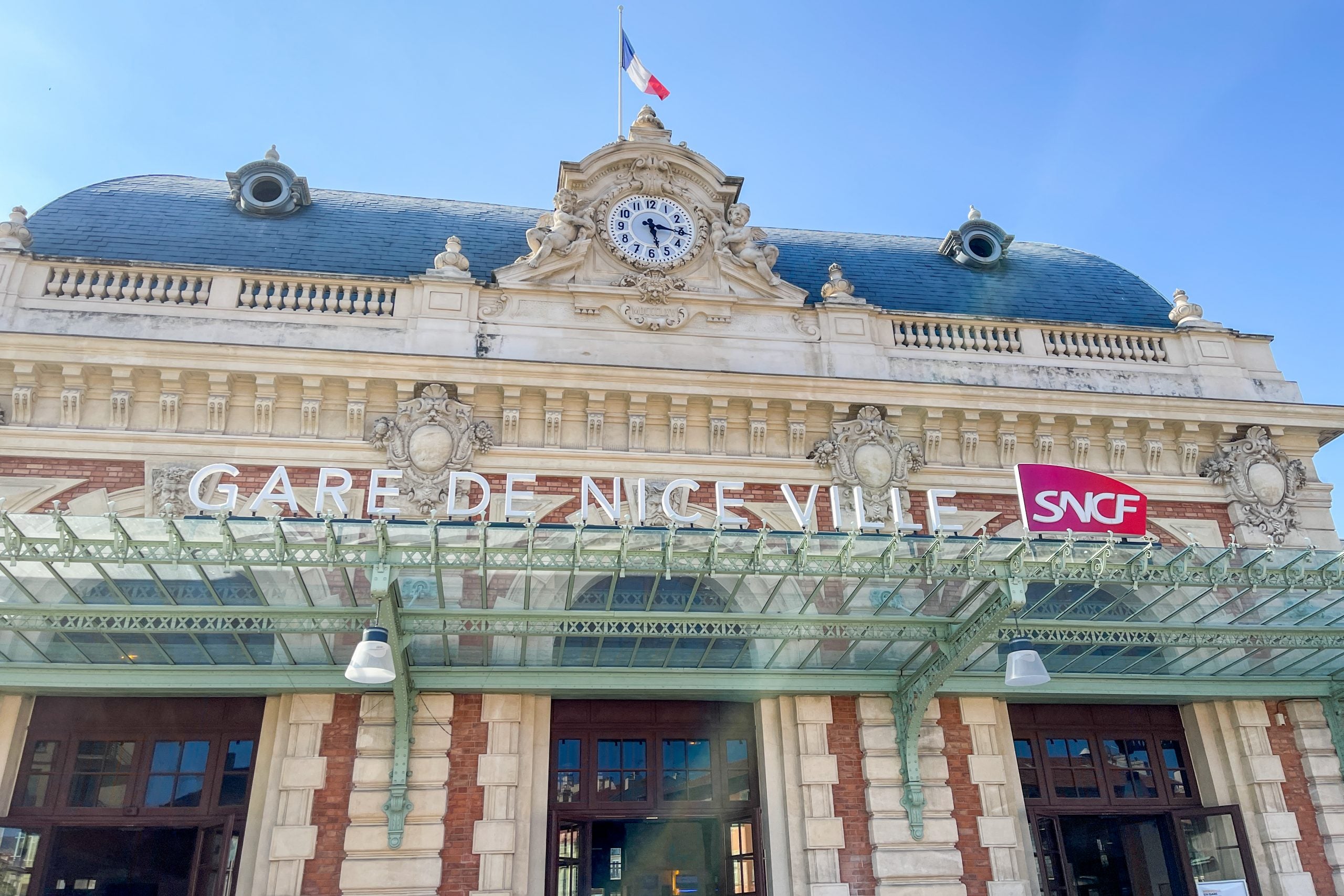 It’s also worth noting that there are COVID-19 testing booths outside of the station. This can be a convenient place to get a test before you return to the U.S., depending on where you’re staying in Nice.

Related: France is open to Americans; Here’s what it’s like now and when to go

The train ride was just under 5 hours and 45 minutes. A flight would’ve been closer to an hour, but considering the time it takes to get to Paris (CDG) from Paris’ city center, I think the train is worth it. You’ll enjoy great views and a peaceful ride for roughly the same cost as a flight. Plus, the dining car means you won’t be left hungry or thirsty on the ride.

That said, a full train would be a tight fit. You may want to consider booking a first-class ticket if you’re nervous about crowds during the pandemic. These are only marginally more expensive on the full-service Inoui TGV trains, and seems worth it for a long ride.