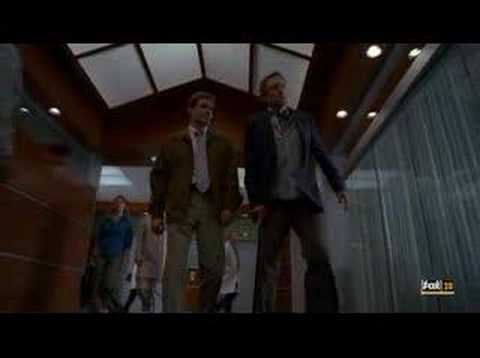 House MD. : Is he using his cane on the correct side ?

House MD. : Is he using his cane on the correct side ? (hint: vascular infarct to the quadriceps muscle)

*disclaimer: Note to listeners…. there is controversy over the lyrics, there always has been and always will be …..but they are listed below at the end of the post.)

When can you ever go wrong with AC/DC ? Combine that with Hugh Laurie from HOUSE MD and you have a great mix.

So, watching this video, why is he using his cane incorrectly? We all know that House’s has a problem with the right hip and leg. “The Rules” state that with a hip problem the cane should always be used on the opposite side to change the D2 lever arm (great lesson on this:https://www.youtube.com/watch?v=FLFQOKVO6X4&feature=youtu.be). After watching this Gait Guys videos you will clearly understand (perhaps to a better level than most of your therapists and doctors who gave you the cane) why it is used on the opposite side.

So, why in the world is the brilliant Dr. House using it on the same side ? We have received this question more than once. And the answer is quite simple. His problem is likely extracapsular. In the pilot episode of House MD it was explained that he suffered a vascular infarct to the quadriceps muscle. Like bone infarcts, muscular infarcts can be painful. If he contracts the quadriceps when loading the leg there will be pain. Just like if the infarct were osseous, the loading of the cortical bone and stress on the trabecular infrastructure in that case, axial loading of the limb (muscular or osseous) will drive pain. So, to lessen the issue he uses the cane on the same side to literally share his body mass load over the length of the cane and splinting of his body mass through that right arm and the cane. He is essentially attempting to use the cane as his weight bearing limb, same as if using crutches. The cane use on the opposite side is best used when you are attempting to unload the muscular compressive forces across the hip (acetabulofemoral) joint. Contraction of the gluteus medius generates the greatest joint compressive loading of all of the hip muscles because of its orientation during gait. Thus, utilizing the cane on the opposite side acts as a hydraulic lift necessitating a shift in body mass closer to the joint and reducing the compressive demands on the gluteus medius muscle.

* Rule breaker: sure, you can still use the cane on the same side to reduce the gluteus medius forces, it is just a bit more awkward and arguably less efficient from a physics persective. But it can be done. Think about and elderly folk who had a weaker opposite arm, they would feel more comfortable using House’s strategy. The rules are not hard pressed.

* So, House is using the cane correctly for his condition. Of course, he is no dummy !

Rules are meant to be broken. When you are as smart as House you know when to break the rules.

Thanks for the reminder AC/DC ……lyrics

House MD. : Is he using his cane on the correct side ?