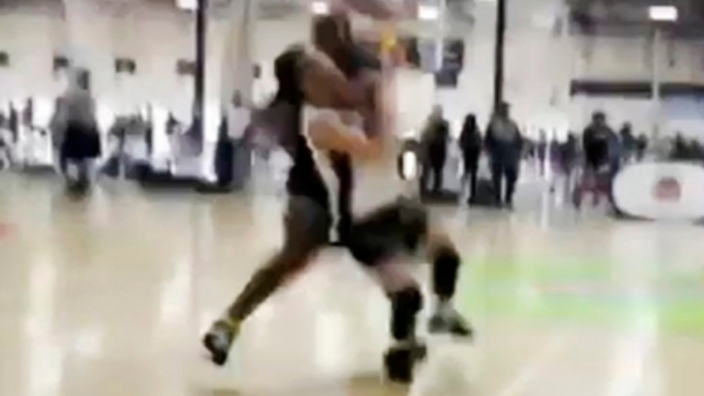 Latira Hunt, 44, was charged with two misdemeanors: one count of contributing to the delinquency of a minor and one count of battery.

A girls basketball game in southern California last month escalated to dangerous levels when the mother of a participant reportedly instructed her 14-year-old child to hit an opposing team’s player, an act captured and shared on social media.

A basketball tournament in Garden Grove, located just south of Los Angeles, had pitted SoCal Blaze against Dream Academy on Nov. 7, when the assailant, playing for Dream Academy, attempted a three-point basket. Lauryn Ham, 15, came near her, apparently to block, and the two athletes fell to the floor. Moments after they rose to their feet, the player struck Ham, knocking her to the floor — a move characterized as a “sucker punch.”

Ham was left with a concussion, according to local reporting. The act was so egregious that the SoCal coach ended the game after it happened.

The referee told NBCLA the other girl’s mother allegedly said to her daughter: “You better go hit her.”

“She did it with intention,” Alice Ham, the injured girl’s mother, told the news outlet. “A mother inciting violence by telling her daughter go and attack my child.”

The unnamed player was removed from the facility. On Thursday, her mother, Latira Hunt, 44, was charged with two misdemeanors — one count of contributing to the delinquency of a minor and one count of battery — the Orange County District Attorney’s Office said in a statement.

The aggressor’s father, Corey Benjamin, played for the Chicago Bulls from 1998 to 2003. He told a local news outlet, “This is not how I raised my daughter.”

“To the young lady who was punched by my daughter during a youth basketball game, I sincerely apologize to you, and I am praying for your complete healing, both physically and emotionally,” he said. “To her family, I deeply apologize and regret that this happened to your daughter, as she did not deserve this to happen to her. Finally, I apologize to all of those who have been impacted and hurt by the actions of my daughter, as well as those of her mother. I am here for your family and wish only the best for you.”

“It is unconscionable that a parent would encourage her child to engage in violence during a sporting event,” Orange Couty District Attorney Todd Spitzer said, according to NBC News. “Youth sports are invaluable in teaching our children discipline, teamwork and sportsmanship. But a win-at-all-costs mentality that is completely devoid of fair play, respect and civility is disgusting.”

Benjamin noted that he is “shocked and disappointed” at his daughter’s behavior, contending that her actions don’t “exemplify the values, character and spirit of sportsmanship that the game of basketball requires.” He added that he is getting his daughter’s support “in taking accountability for her conduct.”

Kevin Hahn, an attorney for Ham’s family, said the teenager’s kin are happy that charges have been filed, adding, “There is no place in sports for a parent to incite violence against another child. We are hopeful that this will serve to discourage this type of behavior in the future.”

The post Calif. mom accused of telling daughter to punch another player during girls basketball game appeared first on TheGrio.