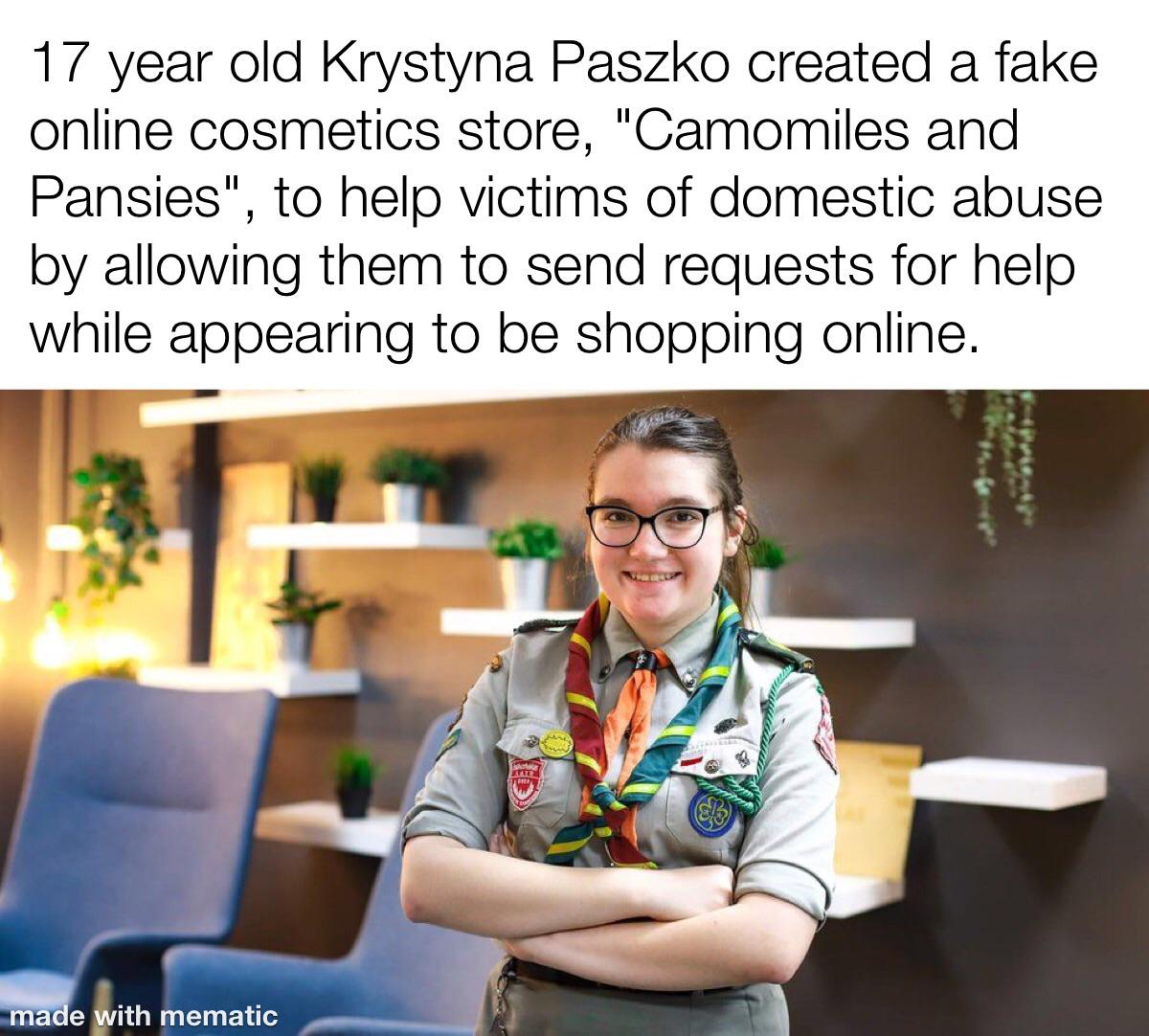 ‘Camomiles and Pansies,’ A Fake Cosmetics Store to Assist Victims of Domestic Violence

On November 20 2021, posts about a fake online store called “Camomiles and Pansies” (for victims of domestic violence to seek help discreetly) were shared to Imgur and Reddit’s r/interestingasfuck:

17 year old Krystyna Paszko created a fake online cosmetics store, “Camomiles and Pansies”, to help victims of domestic abuse by allowing them to send requests for help by appearing to be shopping online.

Neither post linked to any additional information about the claim, nor did either post link to the purported storefront for “Camomiles and Pansies.” The concept described in both posts — a covert way for victims of domestic violence to summon help without alerting an abuser — was not the first of its sort.

In 2015, a comment on the r/AskReddit thread “911 Operators, what is that 1 call that you could never forget?” described a similar interaction involving a 911 operator and a woman ostensibly calling to order a pizza:

I had a call that started out pretty dumb, but was actually pretty serious:

“I’d like to order a pizza for delivery.” (oh great, another prank call).

“Yeah, I know. Can I have a large with half pepperoni, half mushroom and peppers?”

“Yeah, do you know how long it will be?”

“Ok, Ma’am, is everything ok over there? do you have an emergency?”

“..And you can’t talk about it because there’s someone in the room with you?” (moment of realization)

“Yes, that’s correct. Do you know how long it will be?”

“I have an officer about a mile from your location. Are there any weapons in your house?”

“Can you stay on the phone with me?”

“Nope. See you soon, thanks”

As we dispatch the call, I check the history at the address, and see there are multiple previous domestic violence calls. The officer arrives and finds a couple, female was kind of banged up, and boyfriend was drunk. Officer arrests him after she explains that the boyfriend had been beating her for a while. I thought she was pretty clever to use that trick. Definitely one of the most memorable calls.

That comment quickly morphed from an individual anecdote to rumors that 911 operators universally understood calls asking for pizza were veiled reports of dangerous situations. That assumption could be dangerous, with a worst-case scenario being a misunderstanding resulting in help that never arrives.

Similar rumors followed the “pizza 911” (or “999”) one, with code involving an “angel shot” or a the “black dot campaign” circulating virally on social media. The latter rumor involving a black dot happened to be in the news in November 2021, after a teenager using a similar signal was rescued after someone observed the marking.

Reporting on that incident indicated that the rescue hinged on a variable element — another person’s awareness of a specific signal initiating a report:

A teenage girl reported missing in North Carolina has been rescued after using a simple hand signal learned on TikTok that indicates distress. The single-hand gesture is made by putting a hand up with the palm facing outward and tucking the thumb in with the four fingers facing up. The four fingers then close to “trap” the thumb.

A driver called 911 after observing the 16-year-old girl trying to get motorists’ attention with the signal, according to the sheriff’s office in Laurel County, Kentucky.

In a previous fact check, we examined a January 2020 rumor about silent emergency calls, concluding that intermittent and unpredictable efficacy were a factor in connecting those in need with help to responders:

Essentially, a popular January 2020 Facebook post advising users calling 999 to dial 55 for a “silent” call was decontextualized to a point of posing risk to those exposed to the advice. A long-circulating, related rumor that silent 999 calls resulted in police dispatch have had fatal consequences, and in some cases, callers who remain silent might be asked to dial 55 (or cough, or make another affirmative noise) to prevent automatic disconnection of the call. In many cases, dialing 55 would have no effect, or callers would be asked to validate the call in a different fashion.

On the November 2021 Reddit thread linked above, two comments touched on another inherent limitation in trends of the sort — that abusers have the same access to social media help codes that their victims do:

“I feel this shouldn’t beel shared but should be shared. Ya know? Like it’s awesome and more people should know about it. But the more that know about they chances of the abuser knowing of it. Does that make sense?”

“HAVE Y’ALL HEARD ABOUT THE SECRET CODE NAME OF ALCOHOLIC BEVERAGE YOU CAN REQUEST FROM THE BARTENDER WHEN YOUR DATE IS GIVING YOU DANGEROUS VIBES? TELL EVERYONE, NOW EVERYONE KNOWS, INCLUDING POTENTIAL PERPETRATORS.”

In short, the purportedly fake cosmetics store called “Camomiles and Pansies” was one of several crowdsourced efforts to enable covert calls for assistance. But our attempts to actually find the storefront and determine how or if it functioned as described were initially unsuccessful.

We found March 2021 articles about the teen (Krystyna Paszko) and the concept of Camomiles and Pansies. In the BBC’s March 1 2021 article “Why this teen set up a prize-winning fake cosmetics shop,” the outlet explained:

Disturbed by reports of rising domestic violence under coronavirus lockdown, a Polish high school student decided to launch a fake online shop to offer a lifeline to victims trapped in their homes.

“I thought it was a brilliant idea, so I came up with the idea of selling cosmetics.”

In April [2020], Krystyna, who was 17 at the time, decided to launch the fake online shop “Camomiles and Pansies” to sell those cosmetics. The idea is that the victim can hide requests for help from their abuser at home by appearing to be shopping online.

When a victim writes asking to buy a cream, a psychologist responds instead of a salesperson and asks how long the “skin problems” have been going on for, or how the affected skin reacts to alcohol. If someone places an order and leaves an address, it is actually code asking for authorities to visit their home.

A SPIKE IN DOMESTIC VIOLENCE RATES WAS RECORDED DURING THE COVID-19 PANDEMIC FOLLOWING SELF-ISOLATION AND QUARANTINE RESTRICTIONS. “CHAMOMILE AND PANSIES” IS A PROJECT LAUNCHED BY KRYSTYNA PASZKO, WHO SET UP A MOCK COSMETIC ONLINE SHOP ON SOCIAL MEDIA AS A FRONT FOR A PLATFORM OF ASSISTANCE FOR PERSONS SHARING DOMESTIC SPACE WITH VIOLENT PARTNERS/ FAMILY MEMBERS. THANKS TO A CIPHER EMBEDDED IN EXCHANGES ABOUT COSMETICS AND PLACING ORDERS ONLINE, THE INITIATIVE ENABLED A SAFE METHOD OF NOTIFYING THREATS AND EMERGENCY CALLS FOR HELP.

The only additional information on that page was a Facebook page in Polish, which looked like a cosmetics brand’s social media presence. That page appeared to be accepting Facebook Messenger messages.

However, the covert nature of the page meant that none of its attributes explained the manner in which Camomiles and Pansies operated. Neither was it clear whether the service (developed in April 2020) remained functional, or even if capabilities existed to assist victims of domestic violence outside of Poland.

“Camomiles and Pansies” was one of several viral social media “codes” developed to enable individuals experiencing domestic violence to, in theory, safely summon help. As was the case with similar efforts, the idea was of limited applicability — possibly inversely proportional to its level of notoriety. Unfortunately, anyone in need of immediate assistance would have to wade through many social media posts and news articles about “Camomiles and Pansies,” possibly arriving at a Facebook page in Polish. It was unclear if the effort was available only to people in Poland or Europe, and like other codes, there remained a risk that an abuser read the same articles or saw the same posts. Finally, the top result looked like a cosmetics store, but gigantic text at the bottom of the page labeled it as a “mock cosmetics site” developed as a means to report domestic violence.

The post ‘Camomiles and Pansies,’ A Fake Cosmetics Store to Assist Victims of Domestic Violence appeared first on Truth or Fiction?.

‘Camomiles and Pansies,’ A Fake Cosmetics Store to Assist Victims of Domestic Violence