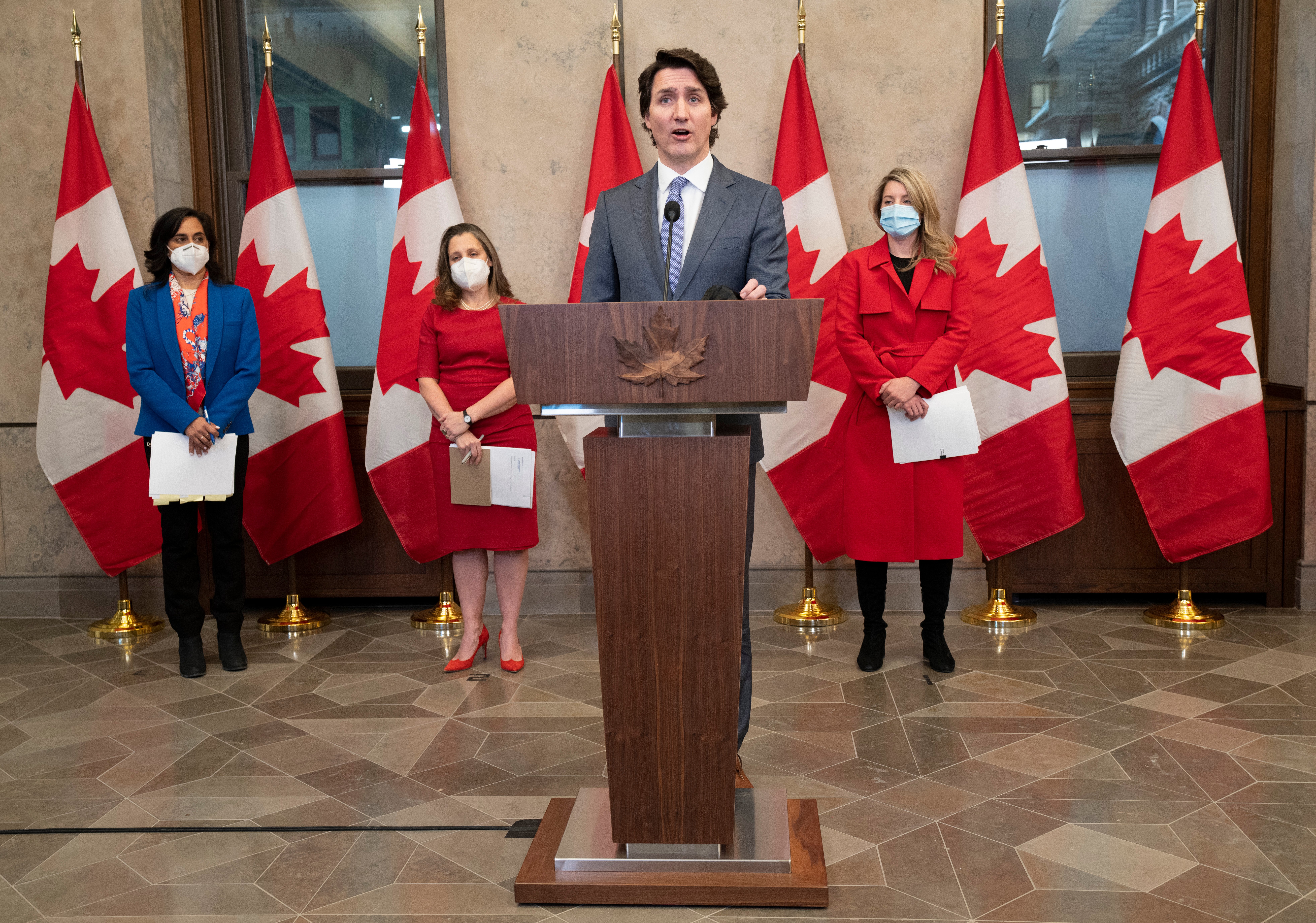 Canada will not send weapons to Ukraine

Training mission: Justin Trudeau announced Wednesday that Canada will not send small arms to Ukraine to defend the country against a threatened Russian incursion, Global reports. The government is extending a training mission for three years and boosting intelligence sharing, and will send “non-lethal equipment.” The Liberal cabinet discussed the matter at three-day virtual cabinet retreat that just ended.

Trudeau said Canada is deploying 60 additional Canadian Forces members now to join the roughly 200 others already on the ground as part of Canada’s military training mission, and that he is authorizing the potential for another 200 to be deployed in the future. “Things like body armour, optics and scopes, elements like that,” Trudeau said when asked to explain what non-lethal aid Canada plans to provide and why the decision was made not to send weapons.

Prepared for violence: Ottawa Police Chief Peter Sloly told the police services board Wednesday that he is working with the RCMP and intelligence bodies to prepare for a trucker convoy protesting vaccine mandates that is making its way to Ottawa, CP reports.

Sloly said the convoy organizers have been co-operative in telling police about their plans for the protest, which he predicts could last several days, but the situation is evolving rapidly. Deputy Chief Steve Bell said police are “tracing parallel groups” that are preparing to join the truckers, as well as counter-protesters, and are monitoring social media.

CPC on side: While Ottawa is bracing for the angry truckers, CPC MPs are cheering them on, CTV reports. That makes some people uneasy, given that some of the protesters appear to be extremists.

While organizers say they are running a peaceful and law-abiding demonstration, experts have raised concerns over the online discourse related to the trucker convoy. From social media posts expressing anti-government and violent sentiments to a suggestion that the event could be like a Canadian version of the January 6, 2021 insurrection at the U.S. Capitol, experts CTVNews.ca spoke with said that the messaging and rhetoric is veering into dangerous territory.

Singh against: On Wednesday, Jagmeet Singh condemned the convoy, saying protesters are pushing “false information” through “inflammatory, divisive and hateful comments,” CBC reports. Online records show Singh’s brother-in-law, Jodhveer Singh Dhaliwal, donated $13,000 to the demonstrators. “[I] … disagree with him about this donation and told him so,” Singh said. “I am against this convoy and against the dangerous and divisive rhetoric we’re seeing coming from it.”

Pleads for calm: Erin O’Toole took to the Toronto Sun on Wednesday to plead for calm and unity.

Not calm: Meanwhile, another Western CPC riding association called for a leadership review, presumably because they would like to get rid of O’Toole, Global reports.

Levi Derkson, the Carlton Lake—Eagle Creek riding president, told Global News that they were inspired by the Foothills motion, but that they did not co-ordinate with other EDAs. “We are representing members who have concerns about the policy direction that the current leadership is taking the party,” Derkson wrote in a statement.

Part of the presentation will also focus on Leader Erin O’Toole’s performance during the campaign — something those concerned about his leadership are eager to see. The party wouldn’t specify if caucus will be shown the review in its entirety, with a spokesman saying only that O’Toole committed to elected members receiving a briefing, unlike campaign reviews of the past which have been held by the party leader and senior staff.

In waiting? O’Toole did an interview with the Post’s John Ivison to make his case for his continued leadership in advance of the report, arguing the party mustn’t become the NDP of the right: “We have to offer a government-in-waiting to the Liberals. We can’t focus on one or two issues that might be the top priority for some people in politics. We have to tackle all issues, including the environment and being more inclusive with the LGBTQ community.”

Not both: Canadian rocker Neil Young has pulled his music off Spotify to protest the way the streaming service allows podcaster Joe Rogan to spread vaccine misinformation, the Hollywood Reporter reports. Young wrote on his web site: “I am doing this because Spotify is spreading fake information about vaccines — potentially causing death to those who believe the disinformation being spread by them. … They can have Rogan or Young. Not both.”

The post Canada will not send weapons to Ukraine appeared first on Macleans.ca.

Canada will not send weapons to Ukraine