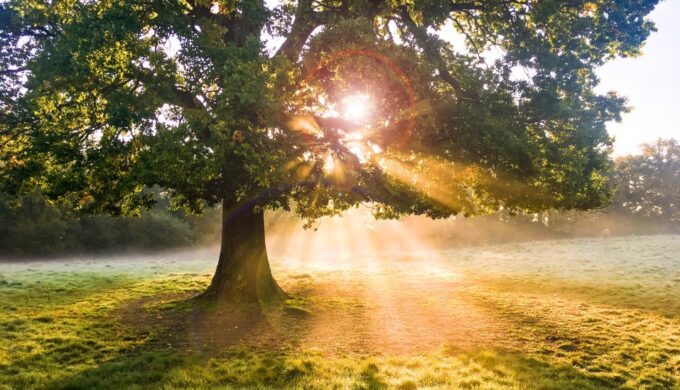 Caussey’s Corner: The Tale of the Soldier and the Little Boy

There are no clouds or sense of lofty motion. The world moves as though a remote has placed the day on ‘slow motion’. Temperatures have exceeded the 100-degree mark everyday for some time. Our water bills seem to appear as high as the national debt, with the price for a gallon of gas the only liquid more expensive than spring water.

Nightly weather-folks on television are playing the same old tune. Hot and dry! My body is depleted of energy and the soul as melancholy as the spirit of a teenage boy at a senior citizens’ Tupper Ware party.

At night I retire to the cool, darkened confines of home. Only the promise of two scoops of ice cream allows me to even consider leaving the house. Outdoor plants and shrubs still struggle against the heat elements, with hopes of being watered evaporating into the night air as traces of slumber can be heard through my bedroom window.

The large oak tree in the backyard needs rescuing. His leaves appear to turn cupped upward, as if beckoning the rain gods to hear a plea for a blessed rain. Tiny songbirds dance among the branches in hopes of finding a little cooler shade among the dispirited leaves.

Yesterday was 102 degrees. Even grasshoppers decided to hide under the ever-present yellowing foliage rather than risk flight into the hot, stagnated air. Greek Icarus would have probably chosen to fly closer to the sun as opposed to staying in Dallas where it was so hot.

Rain clouds have chosen to reside along the Red River and dispense their wares from cloud banks toward the distant west. Cities of the rolling plains and communities hunkered near the Wichita Mountain’s basin have wallowed in the liquid blessings. The Metroplex sizzles on the griddle of August as her citizens try to keep away from the boiling-point pot of post-summer.

It is late night now—the day is long spent and the weekend approaches posthumously. My bedroom is cool and darkened as the walls reflect shadow-creatures across the room, launched into the air by the blades of the ceiling fan. I lie here comfortable and cool with my thoughts racing across the events of the past week. There are images that my mind refuses to release. The scene depicted was on the nightly news a few weeks ago, and later in The Dallas Morning News. It showed an American soldier walking along a war torn street in Iraq. Wind gusts were blasting the air as the temperature hovered near 130 degrees. A sandstorm was pounding the landscape with the same intensity as an old woman trying to keep her baggy stockings above her knees.

A Marine with his weapon at the ready was checking the street perimeter. He peered around a corner with gun raised. A small boy appeared unexpectedly from an alleyway. The soldier checked all directions before bending down and placing a stick of candy in the little boy’s hand. Standing, he scrubbed the little one’s head before positioning his weapon and continuing on patrol. I wonder about the soldier and the little boy. Are they alive? Will they live to tell the story about their chance meeting? Will the soldier return home safely to once again feel the coolness of a refreshing rain upon his face? Will the small act of kindness in the giving of a candy gift reach an advanced degree of significance? Will this act and the thousands of others help to still the tide of anger and hate displayed both here and abroad?

Sometime during the night I awaken, chilled. I turned off the ceiling fan and wandered toward the bathroom. From the window I could see the far northern horizon erupt in flashes of lighting. Maybe it is the advent of a morning thunder storm. I have been fooled into thinking that rain was on the way by other similar conditions. I cover myself with the top quilt.

My mind has slowed, but dispels enough electrical energy to conjure one last passage of thought. It pictures a courtyard filled with children. I can hear their laughter, and sense the coolness of the air and feel the warmth of the morning sun.

I cannot quite figure out the location of this place. But I see the smiling face of a man standing near a gate. He has the face of the soldier in the picture, and he is holding a handful of candy.

Durhl Caussey is a syndicated columnist who writes for Texas Hill Country. He may be reached through this outlet or at durhlcaussey@gmail.com.

Caussey’s Corner: The Tale of the Soldier and the Little Boy