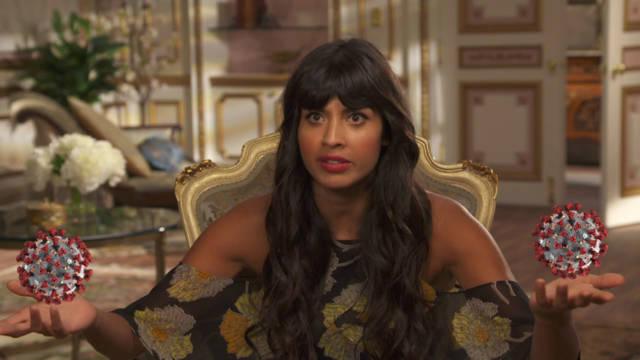 Jameela Jamil is one of my favorite celebrities. She definitely has people convinced that the things she has to say are worth hearing, but they never are. She gets some points for not being Gwyneth Paltrow, but that’s not exactly a high bar to clear.

Jameela Jamil has an air about her of a person who thinks that they’re smart but isn’t. The old saying is she doesn’t know things, but she knows of things. The woman is absolutely irresistible to bees, but I think most humans could do without her at their parties.

Fox News reports that Jamil went on Angela Scanlon’s Thanks a Million podcast to talk about how useless celebrities are.

“I think that celebrities have been exposed,” said the “Good Place” star. “F—k them. Just f–k them all. F–k us all. We’re useless.”

“I want to leave TV when I’m 40 entirely and become an EMDR therapist,” Jamil explained. “And I might well f–king do that. I might just go away and become a therapist.’”

But this is just more of the same crap Jamil is always dishing out. Just like Gwyneth Paltrow built her brand on the healing power of crystals and shoving jade eggs into your lady parts, Jamil built hers on being above it all and insisting she knows how ridiculous stardom really is.

There’s nothing stopping Jameela Jamil from being an EMDR therapist right now if she wants to, other than the fact that you have to be smart to become an EMDR therapist. Why wait six years if that’s what she actually wants to do and thinks it’s a better use of her time?

Because Jameela Jamil doesn’t want to be an EMDR therapist, she wants to be a celebrity. She made in a week on The Good Place what an EDMR therapist makes in a year. She wants to go to the parties and do the media circuits and have everyone listen to her ideas like she knows what she’s talking about. She’s just taking part in the same kind of pandering to blue-collar workers that politicians and celebrities have been doing since time immemorial, only she’s actually pandering to white-collar workers.