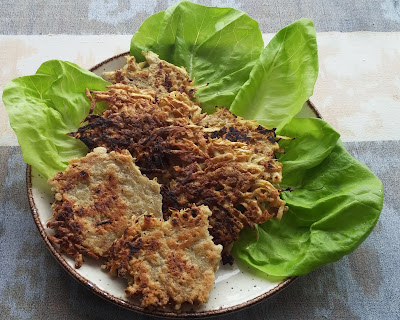 As you can see, this is a quick and simple recipe - and yet, not so fast. I feel obliged to note that I had a terrible time getting the temperature just right. I would move the knob about a millimeter, and it would swing from "way too cool" to "way too hot" or back again. I mean, my stove does that all the time, but it seemed particularly egregious with these. Celeriac is a bit touchy, is what I'm saying. In the end, though, they were very tasty if not quite as beautiful as I would have liked.
The batter seems skimpy and runny, but persevere in mixing them as well as you can - once they are cooking it works just fine.
The bottom 2 fritters were not made with celeriac. They were made with oyster plant. This was the second year that we've grown some, although last time I just looked at them and thought, "Okay, now what?" Progress! With the spices, it was a little hard to assess their flavour. They are considerably milder than the celeriac, which was quite intense. They also had a softer and - I have to use the word - gummier texture than the celeriac. I quite liked it, but it is a texture more common in Chinese cuisine than in Western cuisine. They were more inclined to brown nicely without scorching, which I was also in favour of. I used 2 roots which yielded 1/4 cup each when grated. They wanted to discolour rapidly, so I threw them into some acidulated water while I finished mixing the batter.
6 to 8 fritters
30 minutes prep time

1/4 teaspoon salt
1/4 teaspoon black peppercorns
1/4 teaspoon caraway seeds
1/8 teaspoon fenugreek seeds
1/3 cup potato starch
1 extra-large egg
2 cups peeled, grated celeriac
about 2 tablespoons mild vegetable oil to fry
Grind the spices together and put them in a small bowl with the potato starch and egg. Mix well, working out all the lumps.
Peel and grate the celeriac. Mix it into the batter.
Heat the oil on a griddle over medium heat. Spoon the batter into even portions onto it once it is hot. Cook for about 3 minutes per side, until set and golden-brown. Add a little more oil when you turn them if it seems necessary.
Last year at this time I made Paprika Braised Cabbage.
Source: seasonalontariofood