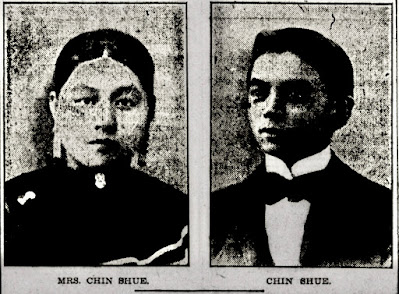 Charles K. Shue, also known as Chin Shue, Chin Quong, and Chin Que Shue, who lived in Boston’s Chinatown, was a wealthy merchant, restaurant owner, and the first Chinese justice of the peace in the United States. He would also be the first Chinese man in the U.S. to win a nomination to public office. However, significant legal woes would also plague him during this life. His tale is a fascinating one, a complicated individual who became successful and wealthy, but not without some problems.

Shue was born in Seattle, Washington around 1874, and came to Boston almost twenty years later, about 1893. The first mention I found of Shue was in the Boston Globe, July 3, 1893, where it was mentioned that he had been baptized, with three other young Chinese men, at the Bromfield Street Church. All four of them were placed on probation for 6 months before they would be able to become full members of the church.

The next mention was in the Boston Globe, February 25, 1896, as it was reported that the Bromfield church celebrated the 5th Annual New Year’s reception of their Chinese Sunday school. The event was attended by about 150 Chinese and Shue was mentioned as one of their “Sunday school scholars.” His intelligence seems evident here.

In 1899, Shue married a “pretty California girl,” proposing to her on only the “third day of their acquaintance.” Although her name was never mentioned in the newspapers, she was the daughter of a missionary, Lee Tong Hay of San Francisco, who was also a member of the Methodist conference. She was born in the U.S., and was the first Chinese child baptized by an American bishop as well as the first Chinese child admitted to public schools.

The Boston Evening Transcript, April 4, 1900, noted that the Mrs. Shue gave birth to a son, who was named Russell Bates Shue Chin, in honor of Lieutenant Governor Bates. Bates himself was unable to attend the christening of the baby, but he sent his wife and daughter to the event. 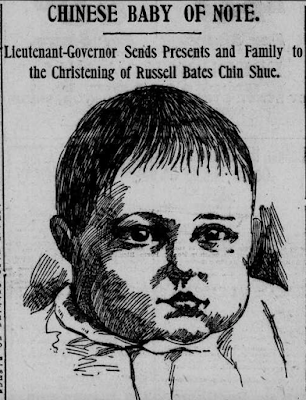 The Boston Sunday Post, April 8, 1900, published photos of Shue and his wife, and a drawing of their new son.

It was noted in the Boston Sunday Post, July 1, 1900, that Shue was a partner in S.Y. Tank & Co., along with Goon Dong and Fong. Both of those men also had Chinese wives and lived on Harrison Avenue.

A few years later, the Topeka Daily Herald (KS), March 26, 1903, reported on the funeral of Chin Thong of Boston’s Chinatown. I was noted that Shue, a merchant at 18 Harrison Avenue, was the master of ceremonies. It was also said that he spoke English, was an interpreter and wore American-style clothes. There was also a brief mention in the Boston Post, February 12, 1906, that Shue was the president of the Chinese Merchants Association.

A lengthier article in the Boston Herald, April 29, 1909, reported on Shue’s major accomplishment. “The first Chinese justice of the peace in the United States was created yesterday afternoon, when Gov. Draper signed a commission for Charles K. Shue, a well known resident of Boston’s Chinatown.” Interestingly, Shue’s powers as a justice of the peace allowed him to “take oaths, issue writs and take depositions” but he wasn’t permitted to perform marriages. The article didn't explain why this power was omitted. “There is demand,…, for a Chinamen who is authorized to take oaths and depositions, and it is to meet this that Mr. Shue was commissioned.”

The article also mentioned that Shue owned a Chinese restaurant on Washington Street, “one of the largest and most ornate of its kind in the city,” although it wasn’t named. It continued that Shue “holds a commanding position as one of the chief merchants of Chinatown.” Shue lived on Harrison Avenue, with his wife and 2 children, and “maintains of the of the most sumptuous homes in the district.” 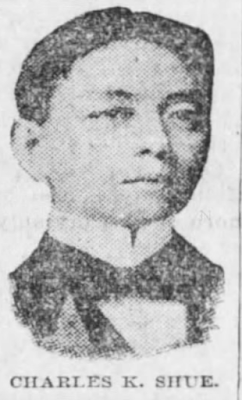 The Butler Citizen (PA), May 20, 1909, provided a photo of Shue, noting he was a partner “in one of the largest and best known importing houses at the Hub.” The article also mentioned that his two sons were 6 and 9 years old.

However, less than two months after becoming a justice of the peace, Shue was arrested! The Boston Globe, June 8, 1909, reported that Shue had been arrested the day before for allegedly assisting in smuggling Chinese into the U.S. It was alleged that in August 1906, a yacht, the Bonita, smuggled Chinese into the U.S., landing in Marblehead. Shue proclaimed his innocence and at his arraignment, was held on a $3,000 bail until a further hearing on June 18.

The Boston Evening Transcript, June 25, 1909, provided a little more information, noting that the matter has been postponed to July 12. Alfred Ames, who had been using the name James Ryder, had been arrested, and was a witness against Shue.

After that next hearing, the Boston Evening Transcript, July 13, 1909, reported that Shue was held for a Federal Grand Jury. More details of the incident were released. The Bonita had brought 33 Chinese from Newfoundland into Marblehead in August 1906. Several witnesses claimed that they witnessed Shue in Marblehead when the Chinese arrived. Alfred Ames, who was a sailor on the Bonita, stated he couldn’t identify Shue as being there. Shue would also finally get out on bail on July 15, after having spent over a month in jail.

Shue’s trial began in January 1910. The Boston Evening Transcript, January 20, 1910, stated that various witnesses testified, several placing Shue in Marblehead at the time of the smuggling. Alfred C. Ames, a cabin boy aboard the Bonita, testified that when the yacht landed, he heard Mr. Kaiser speak to Shue, telling him to warn the Chinese not to make any noise and to lie down in the grass. Another witness, James B. Lehnemann, who was also part of the crew, alleged that Shue met the ship of smuggled Chinese. The government rested their case and then the defense mainly called character witnesses.

Shue was fortunate as the Boston Globe, January 22, 1910, stated he had been found not guilty by a federal jury. This terrible situation was now over for him. It seems the credibility of the witnesses against Shue may have been an issue.

Over two years later, Shue sought public office. The Fitchburg Sentinel, September 26, 1912, stated that Shue was the first Chinese to seek public office and he was nominated as a Representative in the primaries by the Republicans in Ward 7. However, it was also mentioned that Ward 7 had never elected a Republican before. Shue faced a formidable challenge.

The Boston Globe, September 26, 1912, provided more information, stating Shue was the “only man of Chinese parentage who has ever won nomination to public office in this country.”; He was the Republican candidate in the primaries for the House of Representatives from Ward 7, which included all of Chinatown. He would oppose John L. Donovan in the election, and it would be a very difficult battle. “Ward 7 is one of the smallest in the city and has so few Republican voters that the politicians call it a walkover Democratic ward.” A definite formidable challenge.

The article also mentioned that Shue, who now has three children, had been voting for 15 years and claimed to be the second voter Chinatown ever knew. Currently, there were about 6 registered voters in Chinatown.

Maybe as a way to appeal to the greater number of Democrats in Ward 7, Shue tried to change his party designation. The Boston Globe, October 22, 1912, reported that Shue had filed nomination papers under the designation “Democrat Progressive,” attempting to distance himself from being seen as a Republican. However, his opponent, the Democrat, John L. Donovan, protested that Shue could not use term “Democrat” as he was the Republican nominee. The State Ballot Law Commission heard the protest, and ruled against Shue, who had to remain as the Republican nominee. Shue subsequently lost the election, which wasn’t unexpected.

More legal troubles for Shue! The Boston Evening Transcript, September 14, 1915, reported that Shue, the “so-called mayor of Chinatown,” was arrested by Federal authorities as a fugitive from justice. Shue was indicted on charges of “unlawfully receiving, buying and selling and unlawfully facilitating the transportation of two tins of smoking opium in December 1914.” It was alleged that Shue wanted to open a Chinese restaurant in Providence, Rhode Island, and wanted to force Edward Wong out of business, the owner of a Chinese café on Weybosset St,

So, it was alleged that Shue hired two private detectives to conceal opium in Wong’s restaurant but the restaurant was raided before that happened. The two detectives were caught with the opium on them. Shue pled not guilty and was held on a $2,500 bail. It was also noted that Shue was still a justice of the peace, and connected with the Quong Shue Lung Company, and a local trust company.

The Lowell Sun, June 8, 1916, published an article on the final disposition. The article claimed that Shue ran into trouble when he tried to start a Chinese restaurant in Providence. “His arrival was not looked upon favorably by Providence Chinse merchants, it was stated, and his enterprise was blocked. Following this, Shue, in an alleged attempt to get revenge upon his Providence enemies is said to have participated in a plan to sent smuggled opium here, which, it was claimed, was to be ‘planted’ in the restaurant of one of the Providence Chinamen.”

Shue was found guilty and sentenced to 30 days in jail and fined $300 for conspiring to facilitate and conceal the transportation of smuggled opium.

Shue remained largely out of the newspapers for the next eight years, except for a brief mention in Boston Globe, May 27, 1924, noting that Shue was the president of a chain of Chinese restaurants.

Sadly, Shue died on December 23, 1926 and in his obituary in the Boston Globe, December 27, 1926, it was stated Shue, who had lived at 19 Harrison Avenue, had been one of the wealthiest Chinese merchants in Boston, owning Chinese restaurants in Boston, Chicago and Providence. He had been a pioneer in some respects, paving the way for future opportunities for the Chinese in the U.S. As a businessman, he was quite successful, except for his one opium incident. It's an intriguing historical tale.
Source: passionatefoodie