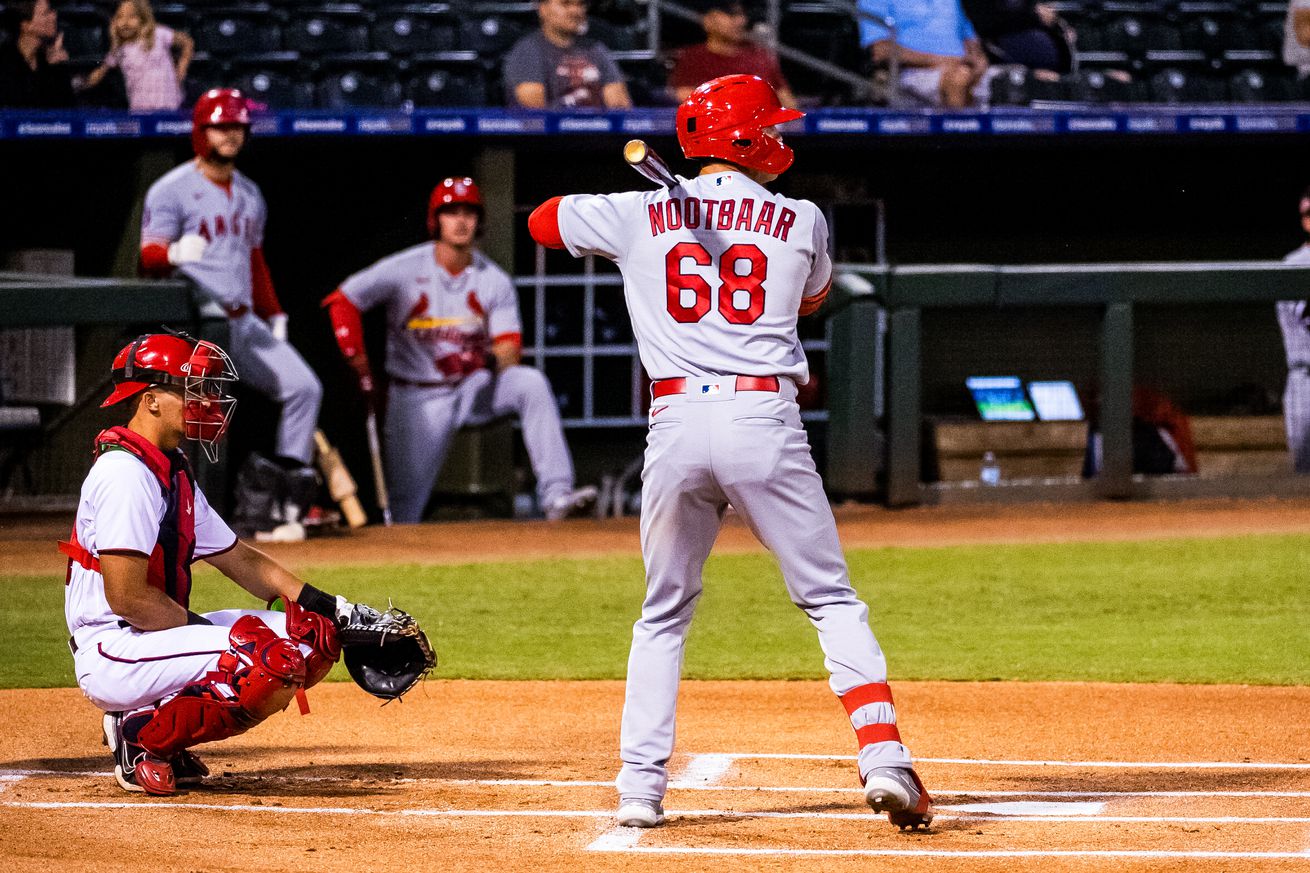 Checking in on the Arizona Fall League

A quick summary of how some of the Baby Birds are doing in the Grand Canyon State.

The Arizona Fall League has been underway for just over three weeks now and with the season being past the halfway point, it seems like a good time to check in with how the Cardinals’ participants are doing. The Cards sent eight players to the AFL to play for the Glendale Desert Dogs, six of whom have either already spent time with the big league club or sit on the list of the top 30 prospects in the Cardinals system. Those are the ones we’ll be focusing on. I tried to find some AFL highlights for each guy, but the video for the AFL is pretty limited and even the ones I did find aren’t very good angles, so I put what each one is trying to show in parentheses after the video.

Hicks made two appearances at the start of the AFL, starting both games and pitching a combined four and two-thirds innings between both starts. In those two starts, he walked five and allowed five runs on four hits while striking out five. According to Baseball Reference, he also had a balk and five wild pitches, making for what was altogether a disappointing fall stint for Hicks. The appearances Hicks made seem to have been a test of how he’s recovering, as he left the Desert Dogs after his second appearance. He and John Mozeliak were apparently happy with where he was recovery-wise and chose to give Hicks a quiet remainder of the offseason.

Someone needs to go to Noot’s Wikipedia page and update it because he currently owns the AFL. He’s absolutely raked so far in 72 plate appearances over fifteen games, slashing .322/.431/.712 which is good for a 1.143 OPS. He’s also drawn eleven walks and leads the AFL in extra-base hits, including hitting for the cycle on October 29. He is second only to Chicago Cubs minor-leaguer Nelson Velazquez in total bases on the AFL offensive leaderboards for qualified players on MLB’s site. Nootbaar’s dominance isn’t too surprising since he’s been facing MLB pitchers for a few months at this point, but watching his commanding performance has been entertaining nonetheless.

Gorman hasn’t seen as much action as Nootbaar has, playing in only six games so far. He has, however, made the most of his 23 plate appearances, notching six hits which include a double and a home run for four RBI. He’s also drawn eleven walks, putting his slash line at .375/.565/.625 in his minuscule sample size. Hopefully, we’ll get to see a little more of Gorman in these last two weeks.

Thompson has seven appearances for the Desert Dogs, pitching thirteen and a third innings and somehow yielding only four runs (three earned) on eleven hits and ten walks. I haven’t seen anything about if he’s let a lot of inherited runners score since he’s only come out of the bullpen, but the walk number is concerning and leaves little room for error, despite striking out fifteen in his time on the mound.

Donovan has somewhat quietly put together a nice fall campaign so far. He has 42 plate appearances over ten games, notching twelve hits and drawing five walks. His performance hasn’t been flashy (five of those twelve hits are doubles and the rest are singles), but he’s slashing .343/.429/.486 through his fall stint so far, and it’s hard to complain about a performance like that.

Last but not least, Yepez has seen almost identical playing time as Nootbaar so far, getting 72 plate appearances over sixteen games. And like all the Cardinals hitters highlighted so far, Yepez is putting together a nice performance, tallying seventeen hits that include five doubles and five home runs for 19 RBI which is good for second in the AFL. He’s also drawn eight walks while striking out twelve times. His slash line currently sits at .279/.361/.607, and it’ll be fun to see how he does in these last two weeks.

(Yepez cranks a home run down the left field line)

Overall, the performances have been encouraging from the Cardinals’ big-name participants in the AFL. But while it has been fun to follow along with, it should go without saying that these performances carry minimal predictive value. I’d certainly rather see good performances than bad ones from these players, but between the small sample sizes provided and the likelihood of pitchers working on skills they struggle with, the performances (good and bad) are best taken with a grain of salt.

Checking in on the Arizona Fall League