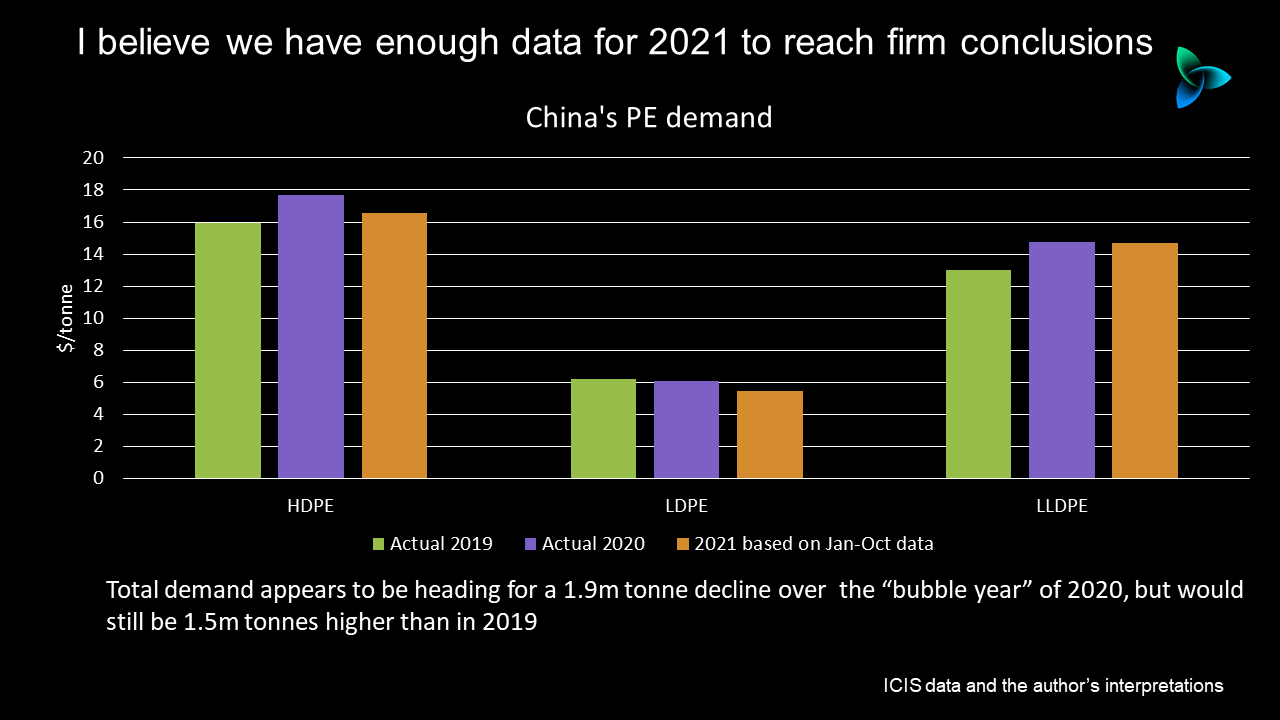 WE NOW HAVE enough data to make some firm conclusions about what the Chinese polyethylene (PE) market will have looked like in 2021. We can also make some early estimates about the shape of the market in 2022.

The slide below details what the ICIS apparent demand data for January-October 2021 (our estimates of local production plus the China Customs data on net imports) indicates about full-year consumption. This involves dividing the January-October numbers by 10 and multiplying them by 12 to get what the full-year demand might end up reaching. 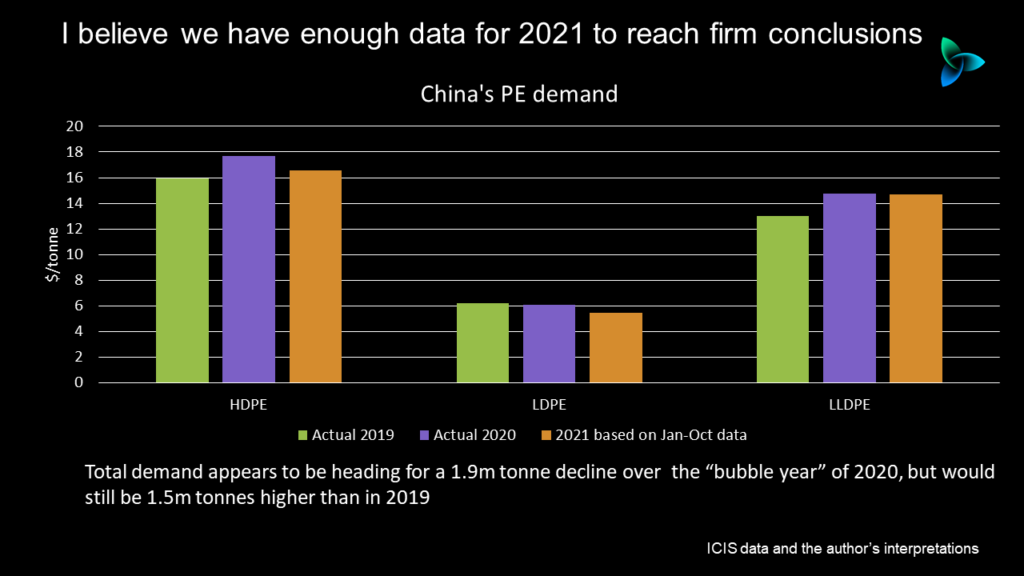 Consumption across all three grades looks to be heading for a 1.9m tonnes decline over 2020.

This decline seems to be the result of shortages of containers and semiconductors that slowed finished goods export growth by volume year on year in H1 2021, according to the data I have seen. This may have continued since then.

But note that the value of exports has soared this year, which is largely the result of inflation caused by the pandemic-related supply chain disruptions and rising energy costs.

What of course matters for PE demand is volume rather than price – how much more or less PE has been required this year in tonnes to wrap finished goods exports or manufacture the exports.

The Common Prosperity policy pivot from August onwards has also depressed demand growth. The pivot has exerted downward pressure on consumer spending because of the deleveraging of the real estate sector. Overall credit availability has also fallen in 2021 versus last year, according to the People’s Bank of China data.

The energy shortages in September-October, resulting from were policy missteps, have also dampened growth slightly. But by the end of October, the shortages were pretty much over because of government policies that had raised local coal output and increased imports.

But we need to put my forecasts of 2021 consumption into the context that 2020 was a bubble year, when growth, quite literally, went through the roof. This was the result of the “China in, China out” story, booming imports and local demand for PE in 2020, as China’s exports of finished goods soared to meet the lockdown needs and wants of the cash-rich middle classes in the West.

So, a cooling-off in growth was probably inevitable. Take high-density polyethylene (HDPE) as an example, where demand soared by 11% in 2020. This makes the 7% decline that could happen in 2021 over 2020 seem less surprising.

It is also important to stress that compared with 2019, my forecast for 2021 would be 1.5m tonnes higher.

Why does this matter so much for the global PE business? Because in 2020, China accounted for 36% of global HDPE demand, 32% of global LDPE demand and 37% of global LLDPE consumption. In second place was the Asia and Pacific region, with around a 20% share for each of the polymers.

I know I keep labouring this point, but I still see far too little attention being paid to the China market. I am afraid that you are therefore going to see further repeats of this essential point.

Common Prosperity and the demand outlook for 2022

If supply chain problems ease (and that’s big “if”, given Omicron) and the Common Prosperity pivot doesn’t cause a major shock to the economy, I see year-on-year growth returning to the Chinese PE market in 2022.

The outcomes you can see in the chart below would mean total demand in 2022 would be 1.7m tonnes higher than my estimates for this year.

But I see growth across the three grades averaging 4% in 2022, a percentage point lower than some markets sources are expecting. 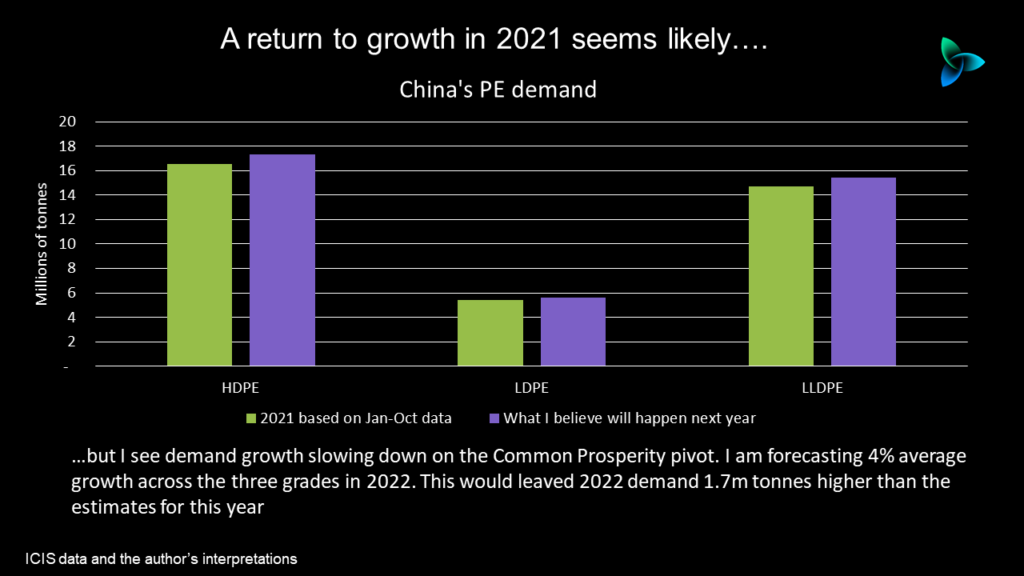 I see this as the result of the Common Prosperity push to make economic growth less commodity intensive in order to reduce dependence on investments, especially in real estate and for environmental reasons.

Regulations to reduce consumption of single-use plastics are now being more firmly enforced after being put on hold at the height of the pandemic China also wants to cut back on its commodity intensity to hit its targets for reducing CO2 emissions – another critical element of Common Prosperity.

I don’t see any reasons why Common Prosperity won’t carry on next year.

The political groundwork has been laid for China’s president, Xi Jinping, to stay in office for at least one more term (he is due, under current rules, to step down next year) – and he could be in office until the 2030s. This will, I believe, lead to the political stability necessary for the economic reforms to continue.

And, anyway, China doesn’t seem to have any choice but to continue with Common Prosperity. Its old economic growth model has run out of road because of excessive investments in real estate, big increases in income inequality and major environmental challenges.

A further decline in imports in 2022 seems likely

Here’s the final chart for today. 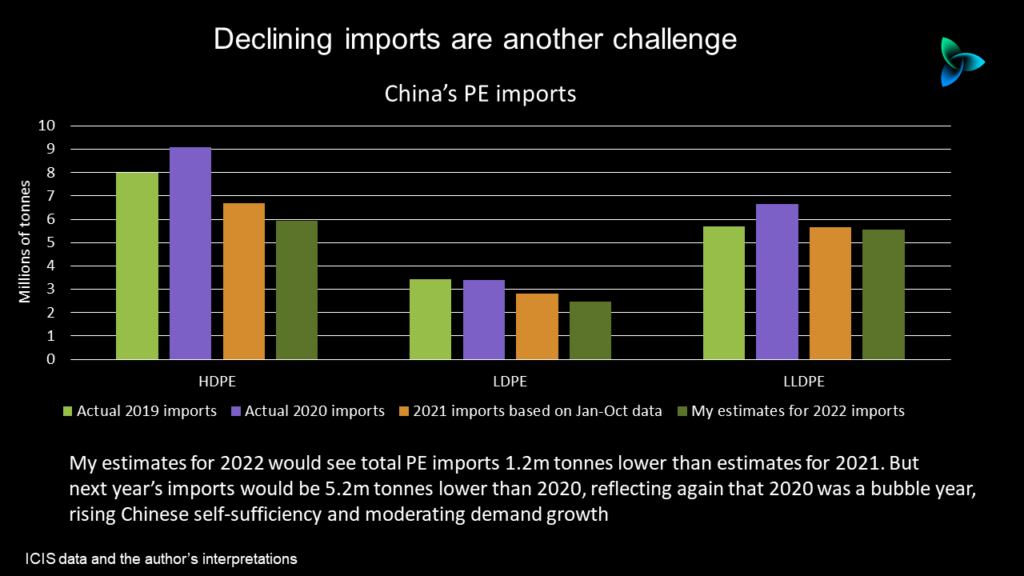 Common Prosperity and Dual Circulation, another headline for a group of government policies, link together to indicate high PE operating rates in 2022:

It is not clear whether China will slow down new capacity additions because of its CO2 emissions-reduction targets. But as there is obviously no speculative or unconfirmed capacity due on-stream next year as all the projects due to be commissioned are already well advanced, this is an issue for the longer term.

My forecasts for total 2022 PE imports are 1.2m tonne lower than my estimates for 2021. But next year’s imports would be no less than 5.2m tonnes lower than in 2020. This would again reflect that 2020 was a bubble year for imports and demand – along with the cumulative impact of a lot of new capacity and moderating demand growth.

Conclusion: China is only one piece of the jigsaw

The images on the pieces in 2022 will also include rising US PE exports as production normalises, more US capacity, a potential moderation of growth in the West – and maybe a third year of negative growth in the developing world ex-China, depending on the severity of Omicron.

Then we need to consider when supply chains will return to normal and when, rather than if, oil prices decline. I see crude prices either declining as supply increases or as demand collapses given that crude now costs more than 3% of US GDP. On several occasions in the past, global recessions have followed oil at more than 3% of GDP.

European and US PE markets could well fall into line with those in Asia during 2022. Margins in the West seem likely to return to their much lower long-term historic differentials over Asia from this year’s all-time highs.

I covered these broader themes in a post last month and shall return to them in posts later this week, as there is more evidence that just as the US Federal Reserve and consensus opinion has adopted the idea that high inflation is long-term rather than transitory, they are behind the curve. I see disinflation or even deflation just around the corner

And structurally, the global PE market is long with events in China, as this post has argued, one of the reasons for this oversupply.