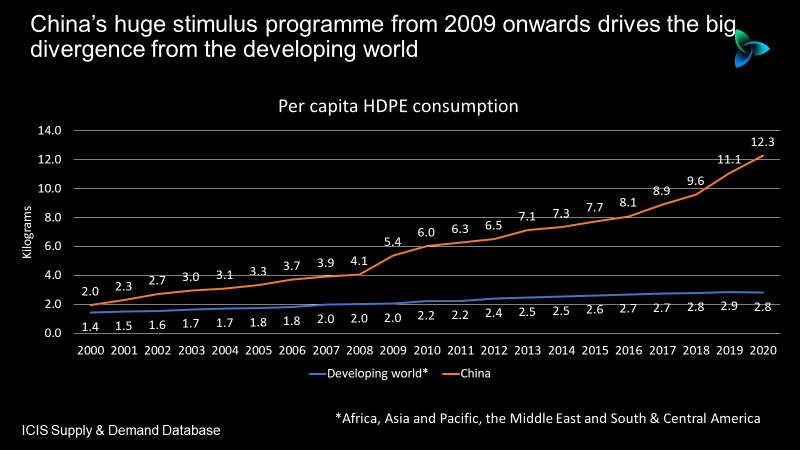 Following on from my post on Wednesday, please study the quite remarkable chart below, and, if you are not making Common Prosperity the very centrepiece of your strategic planning process, ask yourself, “Why not?”. Then please, please change direction before it’s too late.

What you can see are the ICIS estimates for per capita, or per person, consumption of high-density polyethylene (HDPE) in the developing world versus China in 2000-2020.

Still not convinced about the link between HDPE, petrochemicals demand in general, and China’s post-2009 huge economic stimulus programme?

Consider the chart below where I have taken the same per capita demand data for China measured against the rise in China’s Total Social Financing (TSF).

TSF is the official People’s Bank of China data for lending from the state-owned banks and the private or shadow lenders, which is only available from 2002 onwards.

This is similar to the chart I published on Wednesday which compared China’s annual demand in millions of tonnes with TSF.

Paul Hodges, my fellow blogger and chairman of New Normal Consultancy, will discuss in his next pH Report how there has been a 99% correlation between the growth of TSF and China’s HDPE demand in millions of tonnes since 2002.

Why I have chosen per capita demand for the above two charts is to underline how much China has punched above its weight versus the developing world (and remember, China should not be categorised as a developing economy).

China’s population in 2020 was slightly above 1.4bn. In volume terms, China’s HDPE demand was 17.7m tonnes versus 13m tonnes in the developing world from a population of around 4.5bn. Hence the wide gulf in per capita consumption.

Guess what? The gap greatly widened from 2009 onwards.

The data show that China’s export trade is playing a diminishing role in driving its GDP and thus its petrochemicals demand, In 2015, exports accounted for 25% of China’s GDP, but in 2020, this was down to 19%, according to theGlobalEconomy.com

ICIS, World Bank and IMF show that the majority of HDPE demand is concentrated in China’s ten richest provinces. These provinces have been at the heart of the property boom.

Now let us look at what happened to HDPE in China last year.

Not enough people took notice when Xi Jinping, China’s president, said in a speech in 2017 that houses were for living in and not for speculation.

It was only ever a question of time before the policy shifts occurred that put his words into action. The shifts have been taking place from August last year with the launch of Common Prosperity policies.

It was made clear that there would be no bailout of the big investors in Evergrande, the highly indebted real estate developer. The developer has fallen into debt default.

“Stock investors [in 2021] lost more than $90bnof market value from their holding in Chinese property stocks in Shenzhen, Shanghai and Hong Kong bourses last year, according to Bloomberg data,” wrote the South China Morning Post (SCMP) in this article.

“China’s TSF reported three consecutive double-digit declines year on year from July to September, which reflected the government’s efforts to deflate the housing bubble by tightening mortgage lending,” wrote the Financial Times in this article.

“New home prices fell 0.3% month on month in November, the biggest decline since February 2015, according to Reuters calculations,” wrote the Guardian in this article.

The value of home sales fell by 16.3% in November, the fifth straight month of decline, official data showed.

New construction starts measured by floor area fell 21% year on year in November, down for the eighth month, while property investment by developers fell 4.3%, the Guardian added.

Remember that the property sector is worth some 30% of China’s GDP, the highest in global economic history.

The end of the real estate bubble is a major reason for the chart below, which is based on the January-November data for China’s HDPE net imports, our estimates of local production during the same months and my conversations with the market.

This would represent the first negative year of growth since 2000. Even in 2008, during the Global Financial Crisis, China’s HDPE market expanded by 4%.

Also be aware of the sharp fall in Chinese imports that took place in 2021, a theme I revisit below.

“In total, China’s developers owe $19.8bn in dollar-denominated offshore debt in the first three months of 2022, analysts at Nomura said,” wrote the Guardian in another article.

That was almost twice as much as the $10.2bn they were faced with in the final quarter of 2021 – a burden that caused default at Evergrande and the threat of default at several other developers such as Kaisa, the newspaper added.

“Cracks in China’s US$1.7tn housing market, about seven times the size of the US market in 2019, are widening,” wrote the SCMP in the same article I linked to above.

Property sales still rose 3% in 2021 but were forecast to drop by 5-10% this year, according to estimates from eight research reports from brokerages, money managers and rating companies, the newspaper added.

Sales were being dampened by concerns that Beijing would introduce property taxes in several of the big cities, said SCMP.

This would be in line with the Common Prosperity drive to boost tax revenues to cover the soaring pension and healthcare costs of a rapidly ageing population, while also raising government money to spend on narrowing the big urban-rural income divide.

The urban-rural income divide is largely the result of the property bubble in the rich provinces.

Given that a key part of Common Prosperity is creating a more equal society, why would Beijing allow the bubble to re-inflate?

There is also the debt issue, underlined by the $19.8bn in dollar-denominated offshore debt due to be repaid in the first three months of 2022.

It seems doubtful that China would want debt problems to get any worse through relaxing restrictions on real estate by too much.

Another feature of Common Prosperity is reducing carbon emissions as China attempts to achieve its international commitments.

When you pour steel and mix concrete to build condos, you generate a lot of carbon.

Returning to the subject of China’s ageing population, the Guardian also reported that the demand for new properties from younger couples was down by 31% in the six years to 2009 because of fewer young couples.

Logic again therefore points to no re-inflation of the property bubble, as building more condos that people won’t need would be a waste of economic resources.

A systemic crisis? An economic collapse? In my view, no, because of China’s track record of getting economic transitions right.

But don’t underestimate the scale of this transition. It is certainly the biggest that China has attempted and so there is tail risk of events going badly wrong.

Under my assumption of a well-managed and successful transition, see below my alternative outlook for China’s HDPE demand in the five years from 2022 until 2026 versus our base case.

This downside would be a long way from the end of the world as growth would still be positive. Of more concern for overseas producers should be next chart.

Dual Circulation, the headline for another group of government policies, includes greater self-reliance or a reduction in dependence on imports.

To this end, and towards the objective of greater economic self-sufficiency, Beijing announced refinery restructuring last November which is expected to result in greater availability of petrochemical feedstocks.

Assuming, therefore, that this leads to higher operating rates in 2022-2026 than our base case factors in – and along with my downside for demand growth – here is the most important chart for today.

As with demand, China dominates global HDPE imports. In 2020, we estimate that China was responsible for around 60% of global net HDPE imports.

It is therefore not difficult to imagine what would happen if my downside is correct and China’s cumulative net HDPE imports in 2022-2026 are 18m tonnes lower than our base case.

Events in China, along with all the sustainability pressures, mean that our industry needs a new business model.

It will no longer be as simple as putting competitively priced petrochemicals on a ship to China, pretty much the basis of success for the last 20 years.

Success will instead be much more service-based – for example, in providing the products and services China needs to achieve the environmental aspects of Common Prosperity.

This is also going to be a much more complex and more nuanced future, where strategies will need to be constantly adjusted in response to the four megatrends – sustainability, demographics, geopolitics and the long-term impact of the pandemic.

For information on how we can support you in this transition, contact me at john.richardson@icis.com.