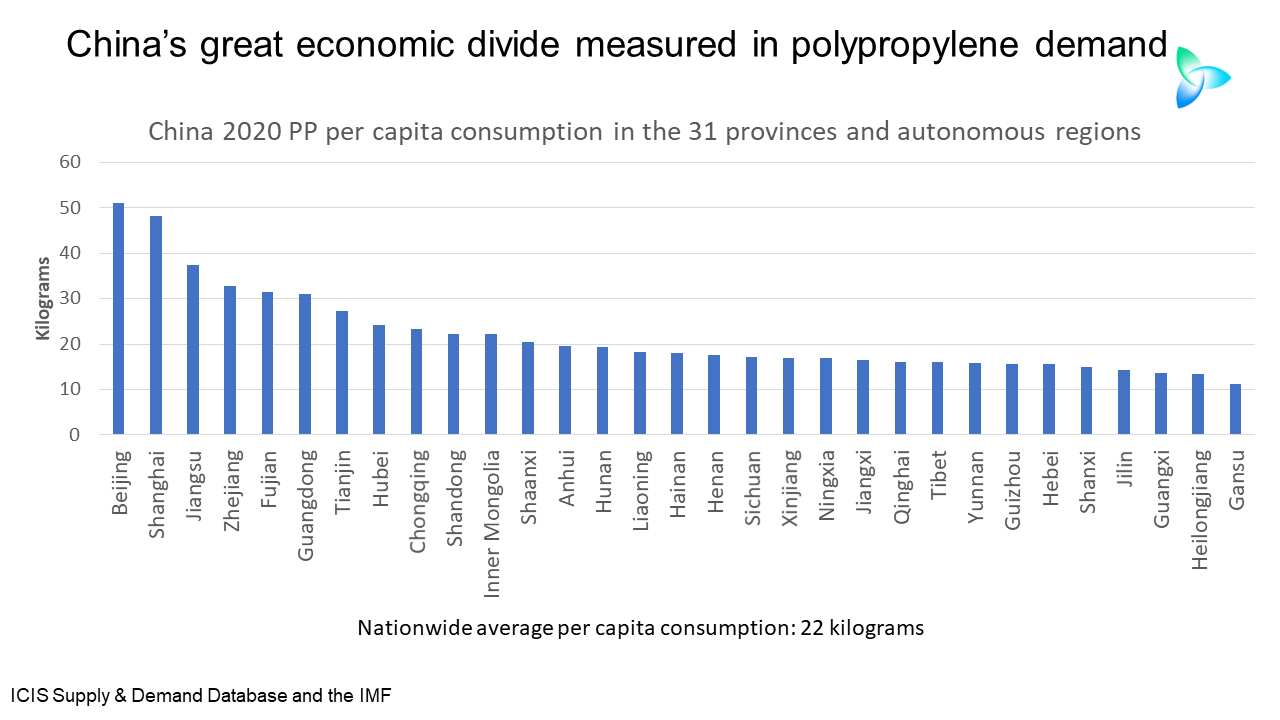 DON’T SAY I didn’t warn you. This article in The Wall Street Journal confirms my warning that Xi Jinping’s “common prosperity” reforms would face resistance from vested interests. China’s president Xi is having to dial back plans for the introduction of widespread property taxes, according to WSJ.

“China has experimented with a tax on some properties in just a couple of cities during the past decade. Earlier this year, Mr Xi assigned to Han Zheng, the most senior of China’s four vice premiers, the task of rolling out the levy much more widely,” wrote the newspaper.

But Beijing had settled for a limited tax plan because of strong pushback, while a proposal involving state-provided affordable housing had emerged as an alternative, the WSJ added.

Some 90% of the population own their own homes with 80% of personal wealth tied up in real estate. This had raised public anxiety over how the property prices could affect house prices, said the newspaper.

Local governments that generated most of their funding from rising land prices had also likely raised concerns over property taxes, the WSJ added.

Plans for trialling taxes in 30 provinces has been reportedly scaled back to just 10 provinces.

Xi said in a landmark 2017 speech that homes were for “living in and not for speculation”.

Since then, Beijing has been laying the groundwork for the decisive policy pivot that took place in August, evidence of which includes no immediate government bailout for Evergrande, the heavily indebted local property developer.

Evergrande might eventually be rescued, but it is thought this would involve converting the company into a state-owned enterprise (SOE), with the big investors being left on the hook for the developer’s $300bn in debts.

Turning Evergrande into an SOE along with nationwide property taxes would serve the same objective: reducing property speculation that has led to alarming increases in corporate and personal debts. One of the objectives of “common prosperity” is to reduce China’s exposure to speculative lending.

Bridging the taxation gap is a significant hurdle

Taking the air out of China’s real estate bubble would fulfil another “common prosperity” objective – narrowing the wide wealth and income gap between China’s often extremely rich multiple property owners and everyone else. Elizabeth Economy, the author on China and senior advisor to the US Department of Commerce, estimates China’s Gini co-efficient at 0.47 – one of the worst in the world.

But, as I said, 80% of personal wealth is tied up in real estate and here is the thing as well: Most of the spending on social services is the responsibility of subnational governments, including provinces, counties (very important) and cities, said The Diplomat.

“Including local government companies, local governments account for a whopping 89% of total government spending. They are largely responsible for public service delivery and managing and financing the social safety net,” wrote the magazine.

China is unique in managing its public pension system and unemployment insurance locally, according to the World Bank.

The dilemma is, though, that while local governments depend on rising land values to pay for their welfare liabilities, tax revenues need to be greatly increased if China is going to meet the demands of a rapidly ageing population and distribute more funds to its poorer rural provinces that have fallen further behind the richer coastal and eastern provinces. In 1987, China’s urban incomes were 83% higher than rural incomes. In 2019, the disparity had risen to 132%:

The resistance to property taxes suggests that bridging this revenue gap is a significant challenge. Failure to do would surely lead to the failure of “common prosperity”.

In several conversations over the last few weeks, I’ve been told that there is nothing to worry about – and that I don’t know what I am talking about because I am not living in China.

I will never claim to a have a mystical monopoly on the truth. Equally, my analysis never says, “this is going to happen, without doubt”.

But I do feel there is a degree of dangerous complacency out there based on China’s superb track record in efficiently managing its economy over the last 30 years or so.

The past, however, is not always a good indicator of the future and what China is attempting to do is build an entirely new economic growth model. This of course means there are significant risks, although I think China could well get this right – again because of the government’s excellent track record.

Still, even though my preferred scenario is a successful transition to a new growth model, this doesn’t mean I am not re-crunching every bit of macroeconomic and petrochemicals data I can get my hands on order to build downside scenarios. Not to do so would be negligent, I believe.

Here again are my three headline scenarios with lots of other scenarios that need to be built – and constantly revised as events unfold – among these three extremes:

Scenarios for polypropylene demand in 2021-2031

As usual, to make this relevant for our industry, I will shortly provide with you with three scenarios for Chinese petrochemicals demand in 2021-2031, in this case using polypropylene (PP) as an example.

Before I give you the scenarios chart, though, consider the chart below. This makes use of our superb ICIS Supply & Demand Database numbers combined with IMF data on China’s average 2020 per capita income level in US dollars and per capita incomes in the 31 mainland provinces and autonomous regions. This gives us an estimate of what PP per capita demand was like across the different provinces and autonomous regions in 2020. 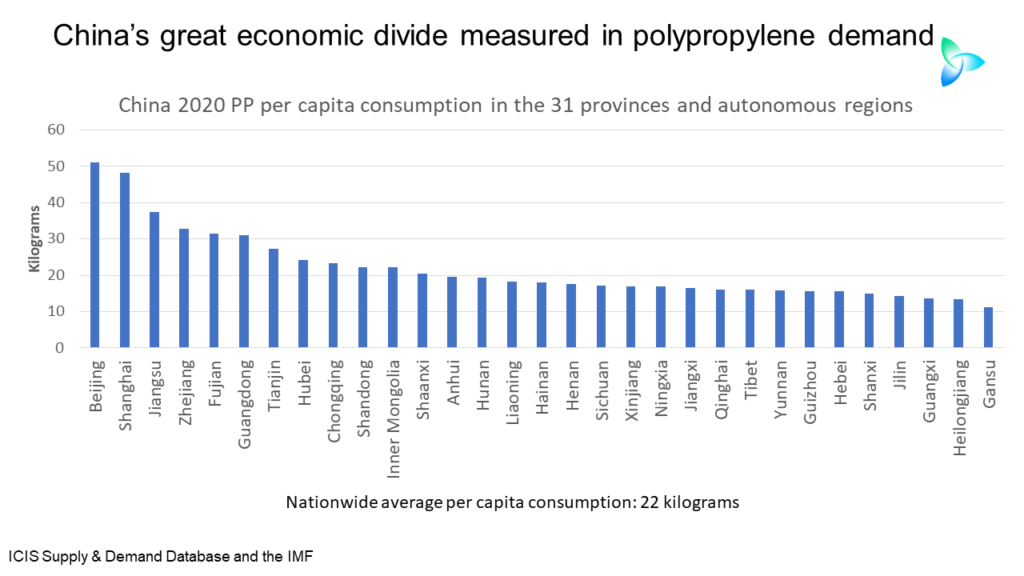 The gap was huge between the richest province, Beijing, at 51kg of PP consumption per capita versus Gansu at just 11kg.

Beijing is, of course, in eastern China and Gansu is in north-central China, one of the poorer provinces targeted for a substantial income and wealth uplift under “common prosperity”.

The same applies to second-to-last Heilongjiang with 2020 per capita demand at 13kg. Heilongjiang is in northwest China, one of the “rust-belt” provinces struggling from the restructuring of heavy industries such as steel and coal.

Back in 2000, China’s national average per capita PP consumption was just 3.6kg compared with last year’s 22kg. But the chart below shows how the bulk of 2020 demand, now measured in millions of tonnes, was concentrated in China’s 10 richest provinces and autonomous regions. 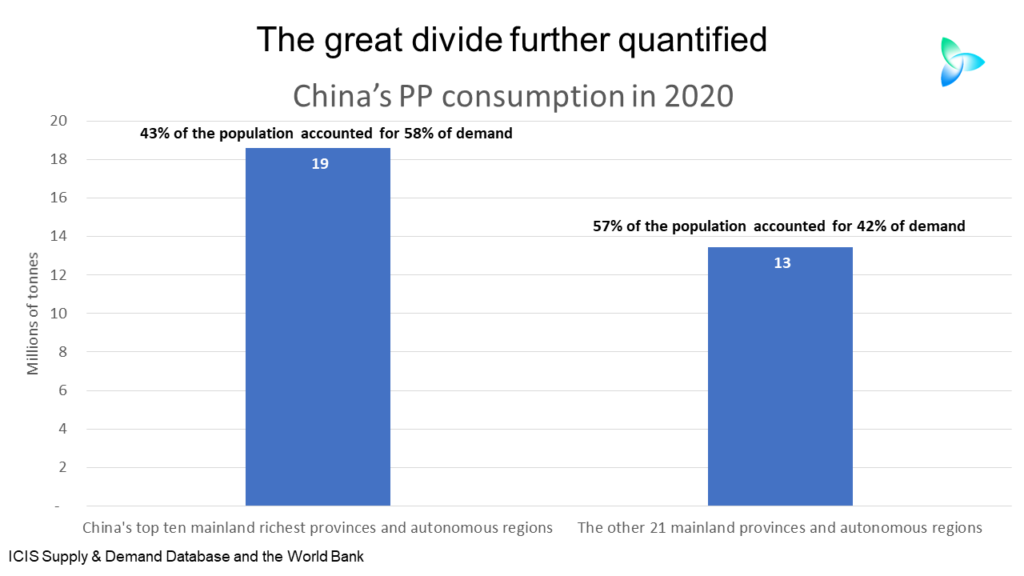 Because I have assessed per capita petrochemicals demand in the provinces and autonomous regions through comparisons with income levels, this gives a pretty good proxy for the uneven distribution of incomes.

If “common prosperity” is successful, then perhaps the imbalance you see below will be corrected. The poorer 21 provinces and autonomous regions may end up driving most of China’s PP demand in line with their greater population share.

Now let’s move onto three scenarios for how nationwide per capita demand might grow in 2021-2031. The first scenario, our base case, involves upside growth in per capita consumption averaging 4% per year; the medium case is 3% and the worst case is 2%. 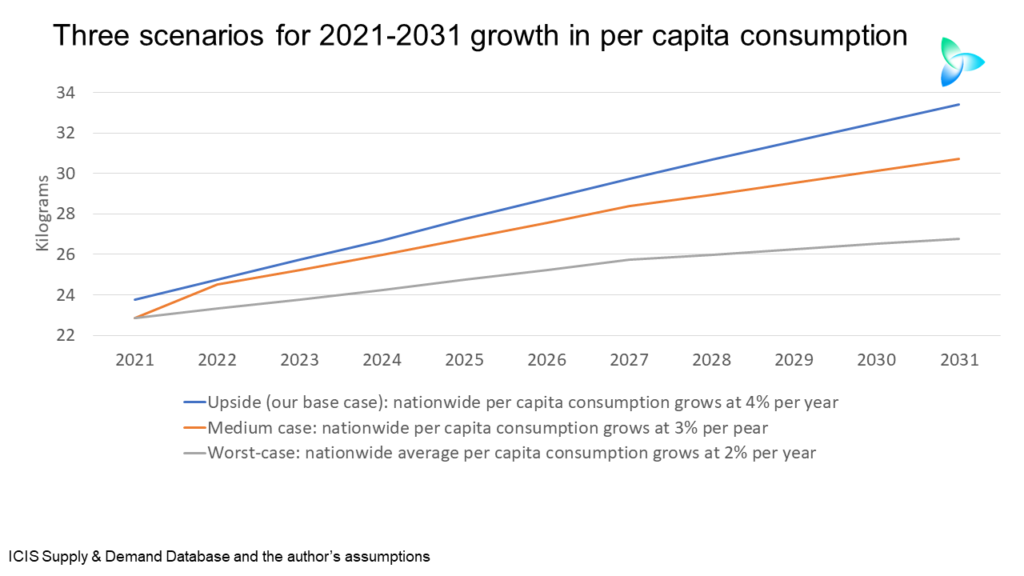 Typically, in many developing economies, per capita growth rates are high as base demand is very low. But in China, demand growth has been astonishing, from just 4.6m tonnes in 2000 to 32m tonnes in 2020.

This was firstly the result of export-led growth from 2001 onwards after China joined the World Trade Organization and then “local-for-local” growth following the giant late 2008 economic stimulus package to counteract the Global Financial Crisis.

Now we are into the unknown – the impact of “common prosperity” on demand. Here is what my three scenarios look like in millions of tonnes. 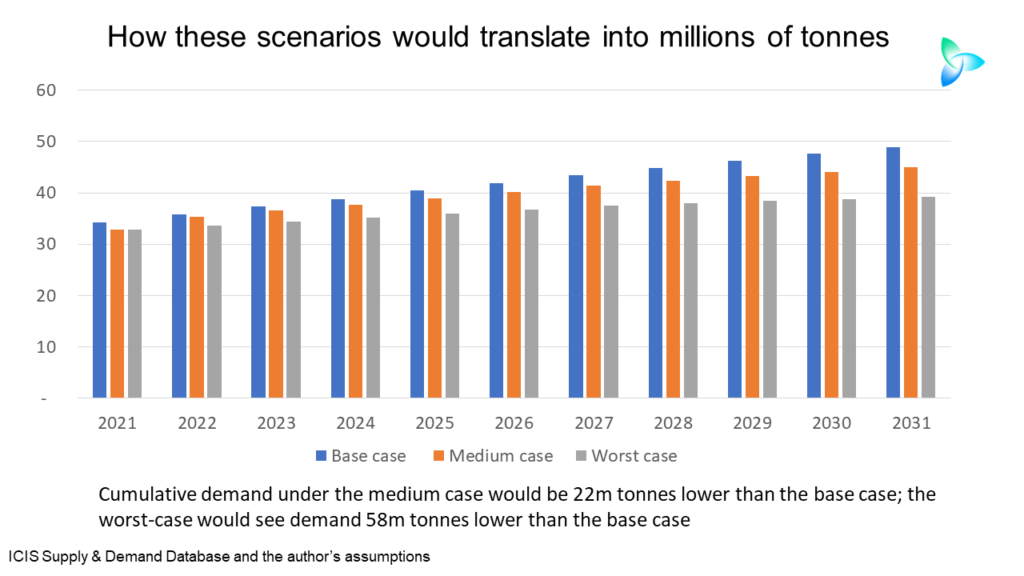 As you can see, there is a big gap between the medium case, where cumulative consumption in 2021-2031 would be 22m tonnes lower than our base versus the worst-case outcome – a 58m tonne shortfall.

Now you might want to pin these three PP demand outcomes on the three headline scenarios I provided in the previous section of this post: Business as Usual, Common Prosperity Success and Common Prosperity Failure.

Not so fast. Another objective of “common prosperity” is reducing the resource and basic-commodity intensity of GDP growth for environmental reasons. What could therefore represent success for China might be bad news for higher cost exporters to China – the worst-case outcome detailed above.

Let’s take this further and imagine Business as Usual – the real estate-led growth model continuing. We might well see a strong uptick in PP demand in the short term as the economy is juiced through more relaxed lending conditions.

But then the economy could hit a wall due to rising bad debts. China already has 90m empty apartments, making it hard to envisage the old growth model continuing with any kind of success for much longer. The worst-case outcome might, as a result, also apply to Business as Usual.

I must stress again that it would be nothing short of negligent to assume the inevitability of a successful transition to a new Chinese economic growth model. You must instead think long and hard about the range of potential outcomes and plan accordingly.

As I said, I believe Beijing will be successful. But I see success looking like my worst-case outcome for PP demand with the same patterns of declining growth applying to all the other petrochemicals and polymers. China will still see growth, but just less than many people are expecting.

I see the winners in this new climate being the lowest cost exporters and local producers that can capture the growth that will still happen – and those with the services and technologies that can help China “green” its petrochemicals industry.

Good luck out there. All of us our going to need it!

The post China’s “Common prosperity” uncertainties multiply as we head into the unknown appeared first on Asian Chemical Connections.