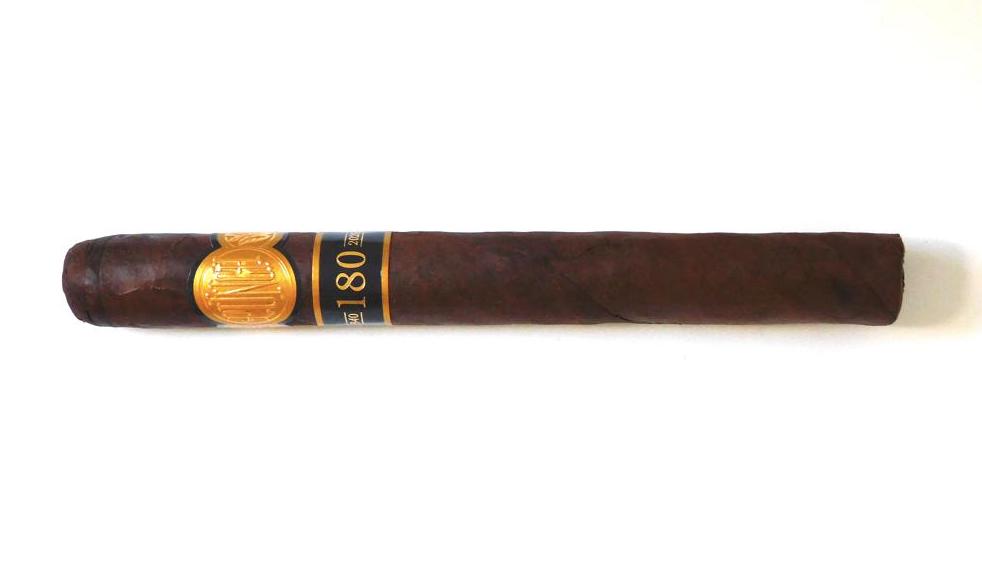 Anniversary milestone cigars have been a part of the cigar industry for many years. Some companies have been embraced these milestones and have frequently released cigars to commemorate the occasion. Others have been more selective of which anniversary milestones were released. In the case of Scandinavian Tobacco Group (STG)’s associated brands, STG has been quite selective on what milestones it will release. 2020 marked the 180th anniversary of the Punch brand, and as such STG opted release the Punch Aniversario commemorate the occasion. The problem was that the COVID-19 pandemic would delay many releases and as a result, it would not be until 2021 when the Punch Aniversario was released. Today we take a closer look at the Punch Aniversario.

The Punch brand was first registered in 1840 by a German named Stockmann and named for a European puppet show character called Mr. Punch (not the magazine, which was created a year later). The brand quickly became a success, especially in Great Britain. There were several ownership changes before the Cuban embargo hit. At that point, the Cuban cigar industry was nationalized. The owner at that time was Fernando Palico and he fled Cuba and would sell his lines to Frank Llaneza and Dan Blumenthal of Villazon & Co. Villazon was acquired by General Cigar. Meanwhile, the brand continues to be sold in Cuba by Habanos S.A.

Now without further ado, let’s break down the Punch Aniversario and see what this cigar brings to the table.

The Punch brand has been known for the use of Connecticut Broadleaf, so it’s no surprise the Punch Aniversario has a Connecticut Broadleaf-forward blend with the leaf being used for the wrapper and binder. Fillers come from the Dominican Republic, Nicaragua, and Honduras. Production is handled at the HATSA factory located in Danlí, Honduras. 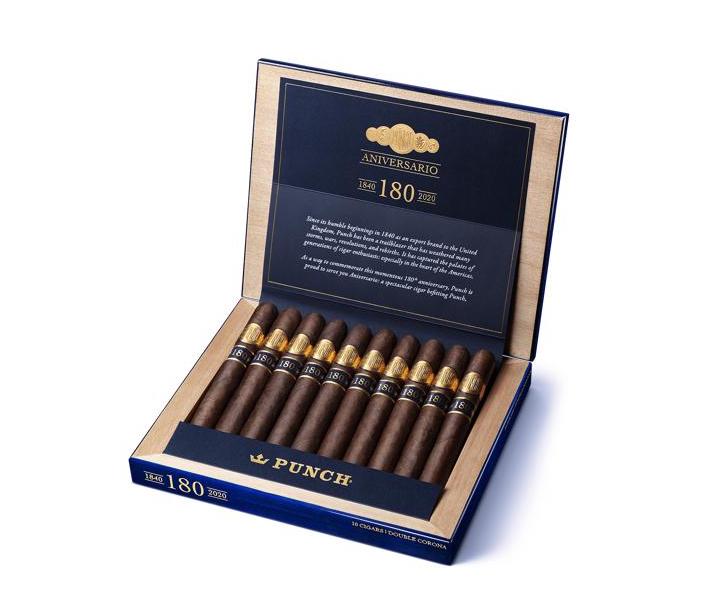 The Connecticut Broadleaf wrapper of the Punch Aniversario had a chocolate brown color to it. There was a very light coating of oil on the wrapper. In addition, the wrapper seams were prominently visible.

There are two bands on the Punch Aniversario. The primary band is gold with blue trim. The name “PUNCH” is embellished in the center of the band. On each side of the band there are three gold medallions. On the far right is a Punch logo on the band fastener.

The secondary band rests just below the primary band. This band is dark blue with gold trim. On the center is the band is the text “180.” To the left and right is the text “1840” and “2020” in a smaller font. On the far right is a Punch logo on the band fastener.

Prior to lighting up the Punch Aniversario, a straight cut was used to remove the cap of this cigar. Once the cap was removed, it was on to the pre-light draw ritual. The cold draw delivered a mix of mocha (a fusion of chocolate and coffee), cedar, and a touch of floral notes. Overall, this was a satisfactory pre-light draw. At this point, it was time to toast up the foot of the Punch Aniversario and move on to the smoking phase.

The Punch Aniversario opened with notes of coffee, earth, and cedar. Early on the coffee and earth notes became primary with the cedar settling in as a background note. These notes were soon joined by some chocolate notes. Unlike the pre-light draw, the chocolate notes remained separate from the earth notes. There were times the chocolate note popped into the forefront. As the cigar moved toward the latter part of the first third, some black pepper notes surfaced on the tongue. On the retro-hale, there was an additional layer of black pepper.

The second third of the Punch Aniversario saw the coffee and earth remain grounded in the forefront. The chocolate notes from time to time still made it to the forefront. At the same time, there was a gradual increase in the cedar notes. Meanwhile, the pepper still remained in the background.

The last third saw the cedar notes join the earth notes in the forefront. The coffee receded, joining the pepper notes. By this stage, most of the pepper notes had diminished. The flavors were somewhat muddled at this stage. This is the way the Punch Aniversario came to a close. The resulting nub was soft to the touch and cool in temperature.

Overall the Punch Aniversario did require some touch-ups to maintain a straight burn path and straight burn line. The touch-ups did the trick, but there were more touch-ups required than I preferred. The resulting ash was firm and white in color. The burn rate and burn temperature were both ideal. 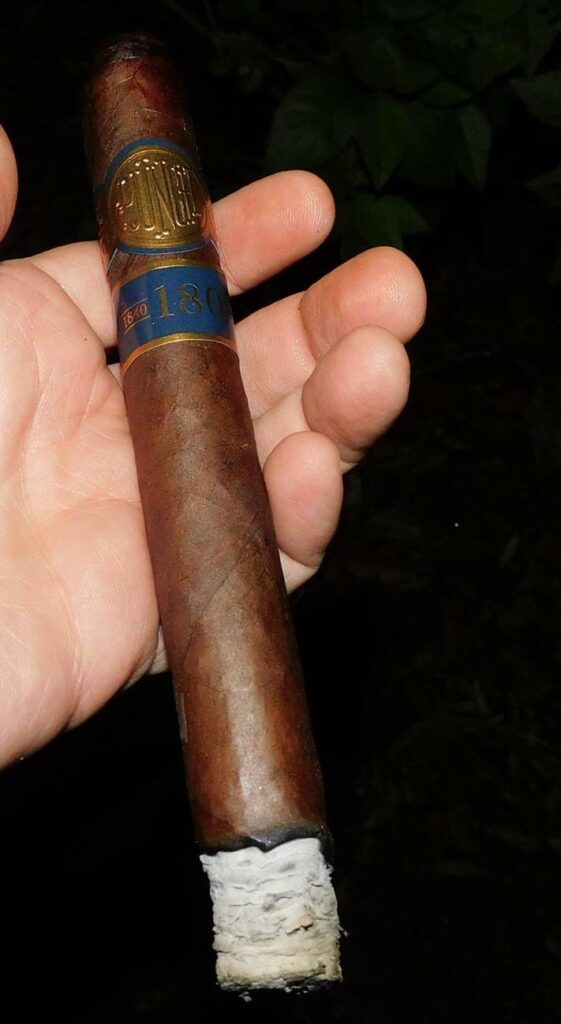 Burn of the Punch Aniversario

The draw of the Punch Aniversario had a touch of resistance to it – which is something that I prefer. At the same time, this was a cigar that produced abundant layers of smoke.

For the most part, the strength of the Punch Aniversario was in the medium range of the spectrum. There was not much in the way of variance as far as strength goes. As for the body, things started out medium before progressing to medium to full in the second half.

While this isn’t related to the overall outcome, I must commend the Punch brand for keeping true to the (non-Cuban) brand’s roots. Specifically, I liked the fact Connecticut Broadleaf was used as a wrapper, and I liked it was made in Honduras. Too many times for anniversaries or milestones I see companies do something completely different than their roots – or go to some other factory they never worked with before. Good for Punch for keeping to its Broadleaf and Honduran-made roots.

That being said, the blend still has to deliver. Unfortunately, In the case of the Punch Aniversario, it started out promising, but in the second third things went south. There was a lot of muddling of the flavors and the cigar really lost its “wow” factor. I wanted more flavor-wise from this cigar, but it simply did not deliver. At nearly $15.00, I expected more from this cigar – and there are certainly other Punch Broadleaf releases I would reach for. This cigar is a pass from me that I can’t recommend at that price point.