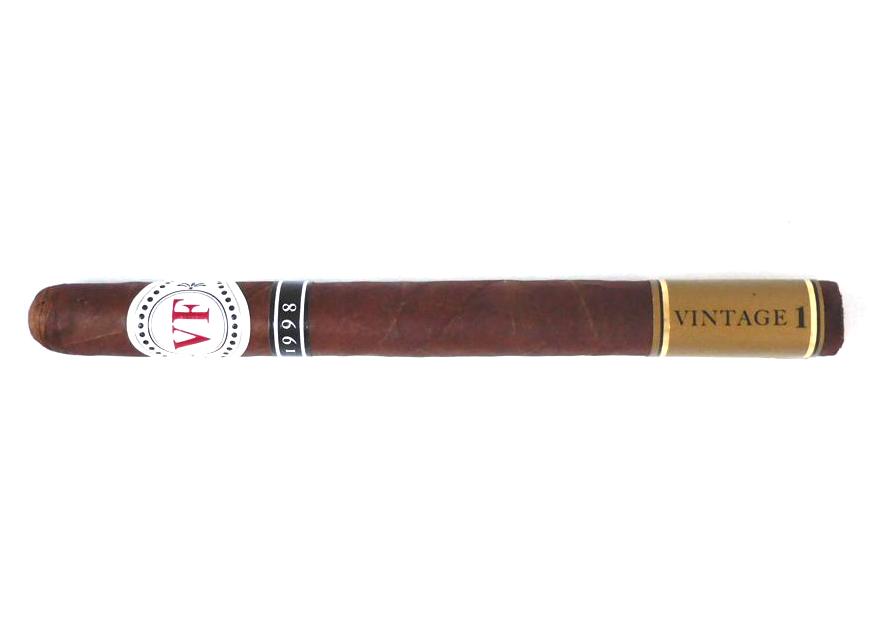 VegaFina is a brand that is under Tabacalera SLU. group. This is the companion group to Tabacalera USA that handles distribution to the International market. Over the years, there have been several VegaFina releases that have also been sold in the U.S. market (most recently the VegaFina 1998). While VegaFina might not be as well known as Montecristo or Romeo y Julieta in the U.S., it is a brand that has maintained popularity in the European market – particularly Spain.

Without further ado, let’s break down the VegaFina 1998 Vintage 1 VF42L and see what this cigar brings to the table.

As mentioned, the VegaFina 1998 Vintage 1 uses a comparable blend to the core 1998 line. The cigar also has tobaccos that have been aged a minimum of three years. The blend features an Ecuadorian wrapper, Indonesian binder, and fillers from the Dominican Republic, Nicaragua, and Colombia. Production comes from the Tabacalera de Garcia factory located in the Dominican Republic.

The following are the two sizes offered in the VegaFina 1998 Vintage 1 line.

Both blends are packaged together in a high-gloss lacquered wooden box containing 16 cigars: eight VF40 and eight VF42L. 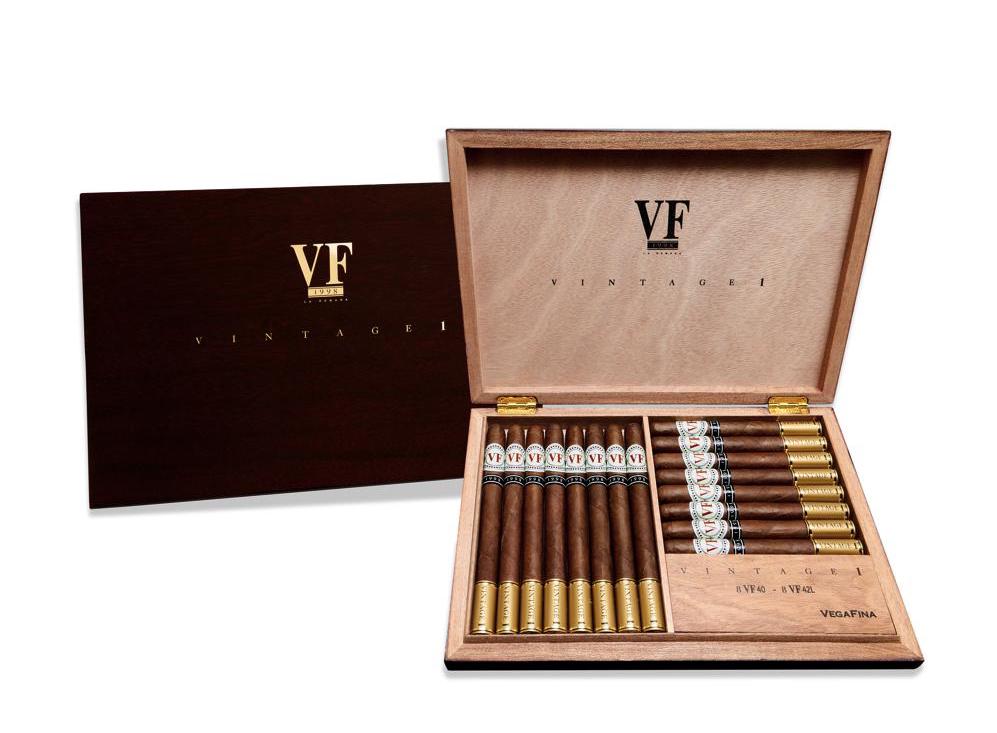 Packaging of the Burn of the VegaFina 1998 Vintage 1 (Photo Credit: Tabacalera S.L.U.)

The following are the core lines released in the VegaFina 1998 line:

There are three bands on the VegaFina 1998. The primary band to the VegaFina 1998 had a thicker stock than most other VegaFina bands (something done with the packaging to give it a boost). The band has an antique white color to it. The center of the band has two concentric black rings with the initials “VF” in large red font. To the left and right of the circles are the text “VEGAFINA”. The remainder of the band has charcoal gray adornments and a silver trim.

The secondary band is thin (in both height and stock) with a black background and white pinstripes. On the band is the text “1998” in white font.

The third band is toward the bottom of the cigar. It is dull-gold with black and metallic gold trim. On the band is the text “VINTAGE 1” in black font in landscape mode.

A straight cut was used to commence the cigar experience of the VegaFina 1998 Vintage 1 VF42L. Once the cap was clipped, it was on to the pre-light draw ritual. The cold draw delivered notes of wood and natural tobacco. This was not one of the more exciting pre-light draws. Since the pre-light draw is not factored into our merit score or value rating, there was no loss of points here. At this point, it was time to remove the footer band of the VegaFina 1998 Vintage 1 VF42L, light up the cigar and see what the cigar experience would have in store.

During the second third of the VegaFina 1998 Vintage 1 VF42L, there was an increase in the tannic flavors. By the midway point, these notes joined the wood and natural tobacco in the forefront. The sweetness from the natural tobacco was now greatly reduced. As the cigar entered the second half, there was an increase in the pepper in the background. The notes of mustiness and earth were also present in the background.

By the final third, the tannic flavors and natural tobacco receded into the background. The pepper joined the wood notes in the background. The end of the cigar had a woody and peppery profile. There were still tannic, musty, natural tobacco, and earth notes present. This is the way the VegaFina 1998 Vintage 1 VF42L came to a close. The resulting nub was cool in temperature and on the firm side.

On each of the samples of the VegaFina 1998 Vintage 1 VF42L, the burn was low maintenance to start. As the cigar progressed, it needed more in the way of touch-ups to maintain a straight burn path and have a straight burn line. The touch-ups did the trick, but they were more frequent than I prefer. The resulting ash was silver-gray in color. This ash wasn’t on the firm side. As for the burn rate and burn temperature, both were ideal. 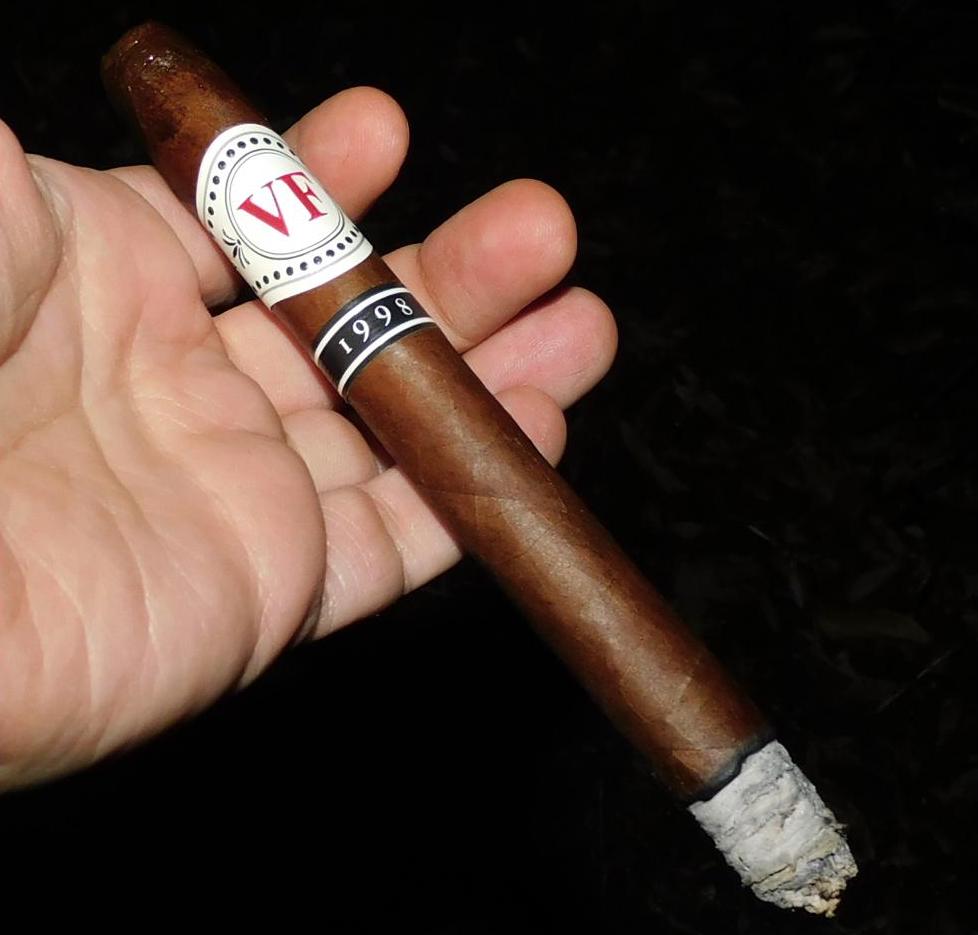 The draw to the VegaFina 1998 Vintage 1 VF42L performed well. It had a touch of resistance – which is something that I like. At the same time, this was a cigar that was low maintenance in terms of deriving flavor.

In terms of strength and body, I found the VegaFina 1998 Vintage 1 VF42L to be slightly bolder than my experience with the thicker VF52. The VF42L delivered a medium strength and medium-bodied cigar from start to finish. During the smoking experience, the body maintained a slight edge over the strength.

Much of my thoughts of the VF42L are similar to my experience with the regular production VF52. VegaFina is a brand that has delivered excellent cigars at a very competitive price point. In the case of the VegaFina 1998 Vintage 1 VF42L, while it still keeps to a value price, this simply was not as good a cigar as I have had from this brand. The VF42L started out a little more promising – delivering some sweetness, but when the tannic flavors emerged, it completely threw this cigar off-balance. In the end, this cigar needed to deliver more in the flavor department and I simply have to recommend passing on this cigar.