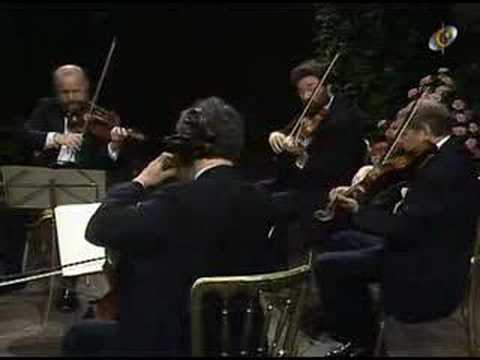 Classical music: The Ancora String Quartet closes out its season with polished, precise and emotionally intense performances of contrasting music by Mendelssohn, Beethoven and Caroline Shaw

Here is a special posting, a review written by frequent guest critic and writer for this blog, John W. Barker. Barker (below) is an emeritus professor of Medieval history at the University of Wisconsin-Madison. He also is a well-known classical music critic who writes for Isthmus and the American Record Guide, and who hosts an early music show once a month on Sunday morning on WORT-FM 89.9. For years, he served on the Board of Advisors for the Madison Early Music Festival and frequently gives pre-concert lectures in Madison.

The Ancora String Quartet (below) is closing its season with a cluster of concerts around the area, including a central one Tuesday night at St. Andrew’s Episcopal Church on Regent Street in Madison.

Of the three works in the program, the centerpiece was the Entr’acte by the American musician and Pulitzer Prize-winning composer Caroline Shaw (below, in a photo by Kait Moreno). It was written in 2011 when Shaw was 29, and has won some acclaim over the years.

It is cast roughly in the traditional form of a minuet and trio, but its point is less any musical substance than the invention of new and utterly eccentric ways of string playing for ear-catching sound effects. Many of those effects are, to be sure, intriguing.

Surrounding this was a pair of quartets seemingly very distinct from each other but related.

The first published quartet, in A major, Op. 13, by Felix Mendelssohn (below), was written in the wake of a romantic song he wrote and whose motives he then used in the quartet.

Emotional suggestions aside, however, it is notable as a darker and more intense work than his subsequent ones in this form. It was composed in 1827, when Mendelssohn was 18, but also the year in which Beethoven died. And it is the shadow of Beethoven, and of Beethoven’s innovations in his later quartets, that hangs over the Mendelssohn work.

Clearly the young master was trying to see how he could absorb the older master’s progressive style into his own still emerging one. I think he found in the process that the two could not be reconciled, and so his subsequent quartets were to be in a less stressful vein.

Against that 1827 work, we were then offered a composition from Beethoven’s own earlier years, though when he was 29 or 30.  This was the final quartet in the set of six published as his Op. 18.

This Op. 18, No. 6, by Beethoven (below) in B-flat major — the program had it mistakenly in G major — is a Janus-faced work, its first two movements still rooted in the late 18th-century background, but with a scherzo full of quirks and tricks that point to the future, and a finale that plays on emotional contrasts.

Its opening Malinconia – or melancholic – music is contested by music of rousing joy, somewhat prefiguring Beethoven’s absorption with recovering health in the Heiliger Dankgesang (Sacred Hymn of Thanksgiving) of his late string quartet, Op. 132. (You can hear the two contrasting moods and themes in the last movement, played by the Alban Berg Quartet, in the YouTube video at the bottom.)

For all three of these scores, a quartet member gave some introductory comments. (Below, first violinist Wes Luke introduces the work by Caroline Shaw.)

Members of the Ancora String Quartet are violinists Wes Luke and Robin Rynan, violist Marika Fischer Hoyt and cellist Benjamin Whitcomb. As a group, the Ancora players displayed intensity and absorption as well as polished precision, in a program of contrasts.

Classical music: The Ancora String Quartet closes out its season with polished, precise and emotionally intense performances of contrasting music by Mendelssohn, Beethoven and Caroline Shaw