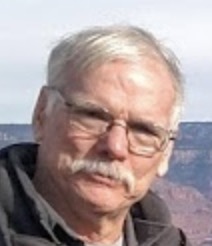 Roger Caiazza (on the subject of)
Independent Researcher and Publisher,
Pragmatic Environmentalist of New York

[Editor’s Note: New York’s Climate Action Council is taking the Empire State on a ride down the wrong track and the results will do far more damage than climate change itself!]

The New York  Climate Leadership and Community Protection Act (Climate Act) integration analysis initial results were discussed at the October 1, 2021 Climate Action Council meeting (meeting recording available here).  There are many warning signs that the proposed plan is incredibly risky but the Climate Action Council has not shown any sign of concern.  Perhaps the moral of a children’s story will remind them that the first principle of electric energy planning should be to not endanger reliability and if there are warning signs, they should re-examine the direction of their policies.

I have written extensively on implementation of the Climate Act because I believe the ambitions for a zero-emissions economy outstrip available technology such that it will adversely affect reliability and affordability, will have worse impacts on the environment than the purported effects of climate change, and cannot measurably affect global warming when implemented.   The opinions expressed in this post do not reflect the position of any of my previous employers or any other company I have been associated with, these comments are mine alone.

The Climate Action Council is responsible for submitting the Scoping Plan that will outline a plan to implement strategies to meet the ambitious targets of the Climate Act.  Of particular interest are the 2030 targets: reduce greenhouse gas emissions by 40% relative to the 1990 baseline and 70% of the electrical energy is supposed to come from renewable resources. Starting in the fall of 2020 seven advisory panels developed recommended strategies to meet the targets that were presented to the Climate Action Council in the spring of 2021.  Both the Council and the advisory panels are composed of political appointees mostly chosen more for their direct involvement in the Climate Act transition than their expertise in the energy sector so the strategies proposed were more aspirational than practical.

Developing a plan to transform the energy sector of the State of New York is an enormous challenge so the New York State Energy Research and Development Authority (NYSERDA) and its consultants are providing technical support to translate the recommended strategies into specific policy options.  The results of this integration analysis were presented to the Climate Action Council in two October meetings.

The integration analysis models the complete New York energy sector.  It includes a reference case that projects how the economy and energy sector will evolve out to 2050 in the absence of any Climate Act policies or mandates.  The following slide from the first integration analysis presentation lists the four mitigation scenarios that were developed to compare with the reference case.  The first simply developed energy strategies that implemented the advisory panel recommendations but the results showed that even more stringent policies were needed because the 2030 targets were not met.

The second mitigation scenario meets the 2030 targets by using low-carbon fuels to meet the critical need for dispatchable resources to keep the lights on.  The third scenario placates the members of the Climate Action Council that naively demanded that no combustion is necessary despite the lack of a proven technology that can keep the lights on in the worst-case scenarios.

Because some members of the Climate Action Council are dupes who don’t appreciate the technological hurdles and risks to reliability of the transition to zero-emissions using renewable energy and have no personal accountability for recommending policies that put New York at risk of catastrophic blackouts, there is a fourth mitigation scenario that looks at options for eliminating combustion as much as possible as soon as possible. 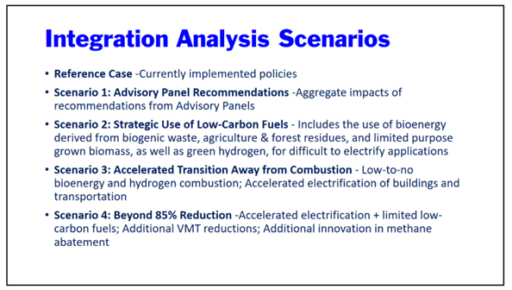 I have an interest in trains no doubt enhanced by early childhood stories like the classic Little Golden Book story of Tootle.  The moral of this story is apropos for the Climate Action Council.  According to the Little Gold Books fandom site the story synopsis is:

The protagonist is Tootle, a baby locomotive who is attending train school, hoping to grow up to be the Flyer on the New York-Chicago route. His schoolwork involves such tasks as stopping at red flags and pulling a dining car without spilling the soup. Most important, however, is that he must stay on the rails no matter what…Bill his good friend and teacher tells Tootle that trains are not professional unless they get 100 A+ on staying on the rails no mater what.

One day when Tootle is practicing the rule a horse challenges him to a race to the river. Tootle goes faster but loses his race lead to the horse when he turns a curve so he gets off the tracks and ties with the horse. In the days that follow Tootle becomes fond of playing in the meadow and not staying on the tracks and Bill quickly discovers what Tootle has been doing. Not wanting to take away the offer of being a flyer Bill decides a plan with the mayor to put Tootle back on the tracks. 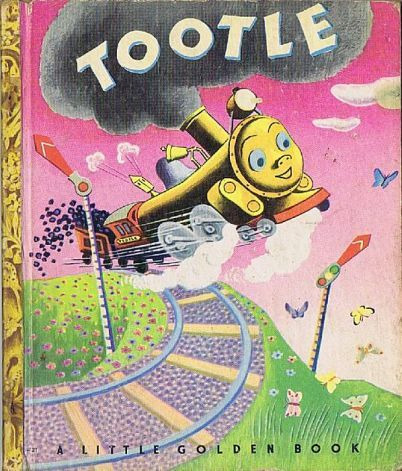 Another day when Tootle is driving the railroad he hops off the tracks to play in the meadow but sees red flags everywhere in the grasses and he is upset due to having to stop at red flags; trains hate nothing more than stopping. Tootle then sees Bill with a green flag over the railings and having learned his lesson gets back on the track and says that playing in the meadow only brings red flags to trains. In response to the lesson learned the town cheers for him and rewards Tootle the flyer of the route to Chicago. In the days that follow when Tootle becomes elderly he teaches some new locomotives some advice including “Stay on the rails no matter what.”

I have previously described reliability issues associated with an electric system that relies on wind and solar.  I  noted that in a presentation to the Power Generation Advisory Panel on September 16, 2020, E3 included a slide titled Electricity Supply – Firm Capacity that states: “The need for dispatchable resources is most pronounced during winter periods of high demand for electrified heating and transportation and lower wind and solar output”.

On August 2, 2021, the New York State Energy Research and Development Authority (NYSERDA) held a Reliability Planning Speaker Session to describe New York’s reliability issues to the advisory panels and Climate Action Council and in my summary of the presentations I noted that there were warnings..  The New York State Reliability Council notes that “substantial clean energy and dispatchable resources, some with yet to be developed technology, over and above the capacity of all existing fossil resources that will be replaced” needs to be developed.

The New York Independent System Operator (NYISO) explicitly points out that a “large quantity of installed dispatchable energy resources is needed in a small number of hours” that “must be able to come on line quickly, and be flexible enough to meet rapid, steep ramping needs” but only implicitly points out that these are magical resources that do not exist yet for utility-scale needs.

The utility consultation group explained that “technology development and diversity of clean resources are essential for long term success” but provide no details of the enormity of that task.  Even the Department of Public Service made the point that “evaluating and implementing advanced technologies to enhance the capability of the existing and future transmission and distribution system” is necessary for future reliability. 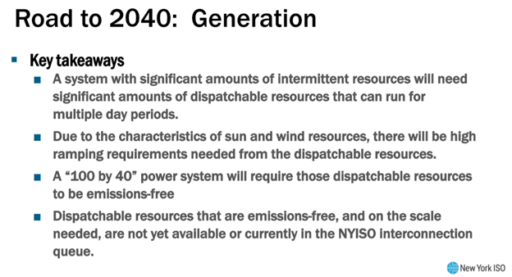 The latest red flag warning comes from the NYISO.  In a presentation describing the 2021 -2030 Comprehensive Reliability Plan, one of the key takeaways in their analysis of the requirements needed to make the New York electric system zero-emissions by 2040 is that “Dispatchable resources that are emissions-free, and on the scale needed, are not yet available or currently in the NYISO interconnection Queue”.

The integration analysis could not ignore the need for a zero-emissions dispatchable or “firm” resource.  All of the mitigation scenarios include a zero-carbon firm resource installed capacity ranging from 15 to 23 GW.  According to the following slide, “firm capacity is provided by hydrogen resources to meet multi-day reliability needs”.  I documented the technological readiness of hydrogen for transport, storage, production and generation from the International Energy Agency (IEA) “Special Report on Clean Energy Innovation” report.

Furthermore, I only evaluated technological feasibility and not costs or environmental impacts.  There are plenty of concerns related to the hydrogen economy overlooked in the integration analysis that must be addressed before they can be used.  Bottom line is that all these issues represent many red flags for this technological “solution”. 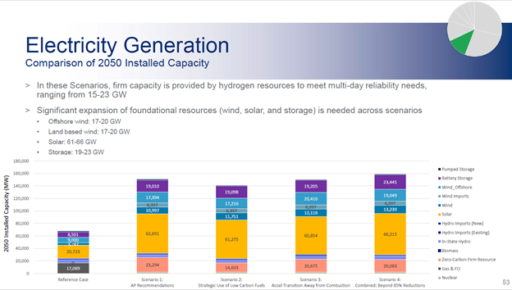 Tootle leaned that it is necessary to stay on track “no matter what” when he was confronted by many red flags waving.  The Climate Action Council needs to remember that in order for an energy plan to stay on track it must make reliability the first priority.  At this time, they are off track and ignoring many red flags waving.  There is no viable zero-emissions firm capacity in existence that fulfills that resource requirement.  If they don’t get on track then the energy plan will fail to maintain current reliability standards and New Yorkers will pay the price with blackouts.

Reposted, with permission, from the Pragmatic Environmentalist of New York blog by meteorologist Roger Caiazza.

Also, be sure to give us a thumbs up below
and share on social media
if you liked this post!