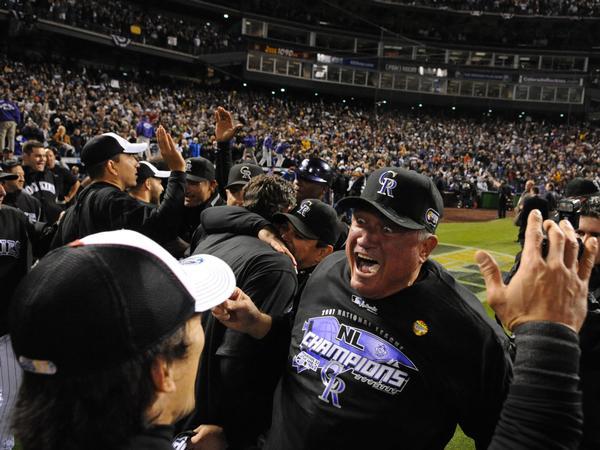 Clint Hurdle, the only manager to lead the Rockies to the World Series, is returning to the organization as a special assistant to general manager Bill Schmidt.

Schmidt confirmed the news Thursday morning, and the Rockies announced it later in the day. The story was first reported by Inside the Seams.

“I think the world of Clint,” Schmidt said Thursday. “I think he can be a big help to me, not only with our players but with our staffs in the minor leagues.

“Clint has a lot of experience in baseball and I’m really excited about this.”

Hurdle also will assist with next summer’s draft.

“I am thrilled to return to an organization that I love,” he said in a statement. “I’m looking forward to working with Bill and his staff and helping out wherever they need me.”

Hurdle will still live in Florida so he can be close to his family but will travel to Denver and to the sites of the Rockies’ minor league teams.

Hurdle has had a 44-year career in professional baseball which began at age 18 when the Kansas City Royals made him their first-round pick in 1975.

Hurdle managed the Rockies from April 2002 before he was fired on May 29, 2009, and was replaced by Jim Tracy. In 2007, he led the Rockies to their only World Series when the club put together a remarkable run in which it won 21 of 22 games to make it to the Fall Classic. The Boston Red Sox swept the Rockies in four games to win the World Series.

Hurdle was the hitting coach for the Texas Rangers in 2010 before serving as the manager of the Pittsburgh Pirates from 2011-19.

The Pirates had not been to the postseason since 1992 and their losing way continued for the first two seasons under Hurdle, as the Pirates set a major league record of 20 losing seasons in a row.

In 2013, however, Pittsburgh made the playoffs as a wild-card team and Hurdle was named manager of the year. The Pirates defeated Cincinnati, 6-2, in the wild-card game. Facing St. Louis in the National League division series, the Pirates fell in five games.

The Pirates also reached the postseason in 2014 and 2015, but lost the wild-card game each time, to the San Francisco Giants, then to the Chicago Cubs.