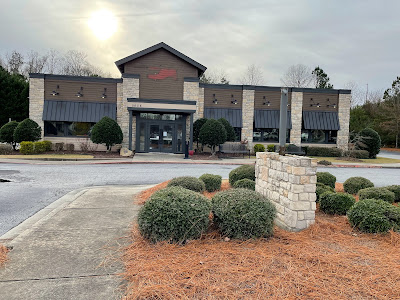 [CLOSURE ALERT] Alpharetta Residents Have One Less Chili's to Ignore

Chili's Grill & Bar has closed its restaurant at 5035 Windward Parkway in Alpharetta.  The restaurant reportedly closed over the weekend with its signage already removed by Monday afternoon.  A sign on the restaurant's front door directs would-be patrons to the chain's other area locations on North Point Parkway near North Point Mall and Medlock Bridge Road in Johns Creek.

A listing last year on commercial real estate site LoopNet indicates that the roughly 5,700 square foot building was constructed in 2003 and occupies a roughly 1.7 acre site that when combined with the adjacent former Macaroni Grill, could provide a developer with a roughly 3.5 acre parcel.

In late November 2019, Chili's closed its twelve year old restaurant at Lindbergh City Center in Atlanta.  The chain has in years past also shuttered restaurants on Holcomb Bridge Road in Peachtree Corners (now Jalisco Market 4), Northlake Parkway in Tucker (now Hudson Grille) and at Sugarloaf Mills in Lawrenceville (now Shoney's), among others.

Cajun seafood restaurants like Hook & Reel and The Juicy Crab, as well as new Canadian entrant The Captain's Boil, have in many cases opened in former legacy casual dining restaurants, and one or both of these Alpharetta restaurants could prove appealing.

Are you surprised to see Chili's close its Windward Parkway restaurant?  Did you realize Chili's still existed?  What would you like to see open in place of the former Chili's (+ former Romamo's Macaroni Grill) on Windward Parkway in Alpharetta?

[CLOSURE ALERT] Alpharetta Residents Have One Less Chili's to Ignore