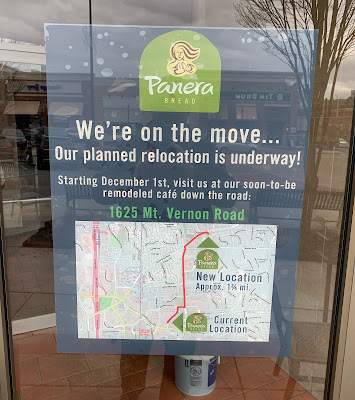 Panera [Bread] has closed its bakery cafe at Ashford Lane (formerly Perimeter Place) in Dunwoody.  The fast casual restaurant, a center mainstay since its debut in 2006, reportedly closed abruptly about two weeks ago and according to signage on the door "moved" to Dunwoody Village.  In reality, the company closed the restaurant and hopes that would-be patrons will travel the roughly two miles to 1625 Mt. Vernon Road where the restaurant has operated a location for several years.

Panera is now the third restaurant in the mixed-use development to close in the past few months following the September closures of newcomer The Hummus & Pita Co. and longtime tenant Outback Steakhouse.  Carrabba's Italian Grill and Sweet Tuna, a poke restaurant, both closed in the project in 2020.  Panera in late 2018 closed their roughly four year old location within the food court at nearby Perimeter Mall.  The former Panera in Perimeter Mall is today home to an outpost of Mandarin Express.

Earlier this year, ToNeTo Atlanta obtained leasing materials for Ashford Lane that indicated that popular hot chicken chain Hattie B's had an LOI (Letter of Intent) in on the roughly 3,600 square foot Panera space.  However, recent conversations with real estate professionals familiar with the center's leasing and a representative from Hattie B's tell ToNeTo Atlanta that the chicken joint is not part of the Dunwoody project.  In better news, the Hattie B's representative did tell us that progress is finally being made on their highly anticipated West Midtown location, and that it should open in late March.  The restaurant, first announced in 2019, will be located at 711 10th Street and at 4,800 square feet, is expected to be the Nashville-based chain's largest location.

As for Ashford Lane, despite the closures, several high-profile restaurants have signed on to be part of the center's new look including Superica, Jeni's Spendid Ice Creams, Brown Bag Seafood and Sweetgreen.  As ToNeTo Atlanta has said before, the siteplan we have reviewed has several other well-known and new-to-market names, but as leasing efforts are still underway, we will not be naming them.