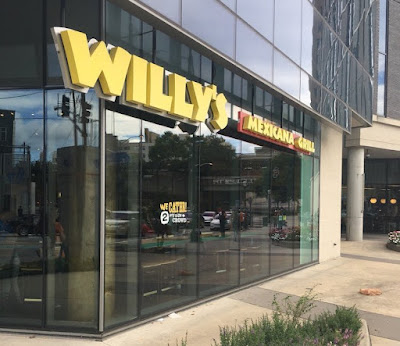 Willy's Mexicana Grill informed patrons today that is has permanently closed its restaurant on the campus of Georgia State University in Downtown Atlanta.  The restaurant, located at 100 Piedmont Avenue at the Parker H. Petit Science Center, opened in 2012 and was for a while a popular destination for students and white collar workers alike.  The pandemic changed that and the Atlanta-based company opted to shutter the restaurant.

An email sent Wednesday morning to members of the company's Burritohead email club said in part:

"It has been an honor and privilege to serve the GA State community for the last 10 years. This location, like many others, has been impacted by the pandemic and it is in our best interest to close this location permanently."

The email went on to thank patrons for their business and direct them to the other Downtown Willy's at [The Hub] at Peachtree Center for their burrito fix.

The Piedmont closure is only the fifth in the company's 26 year history.  Willy's previously closed a corporately owned restaurant at The Mall of Georgia in Buford, along Roswell Road in north Sandy Springs and most recently, at Midtown Place across from Ponce City Market in 2018.  The one and only ever franchised Willy's, a location in Gainesville, Florida, closed in 2014.

Following the closure, Willy's will operate 30 restaurants in Georgia, mostly in metro Atlanta, but with outposts in Athens, Columbus, Cartersville, and Peachtree City as well.  This past April a sister brand, Howlin' Willy's, a Nashville Hot Chicken concept was launched adjacent to the existing Willy's at 1071 Piedmont Avenue on the Edge of Piedmont Park.

What is your favorite burrito in metro Atlanta?  Did you know Willy's was the inspiration for Moe's?  Where would you like to see Willy's or Howlin' Willy's open next?