We gave Carrie Underwood a spotlight post just so we could all talk about how tacky her dress is, but it’s time to round up some of the other cowboys and country gals at the CMT Music Awards and tell them what we think of their outfits. Put your judgin’ boots on and let’s get to it. 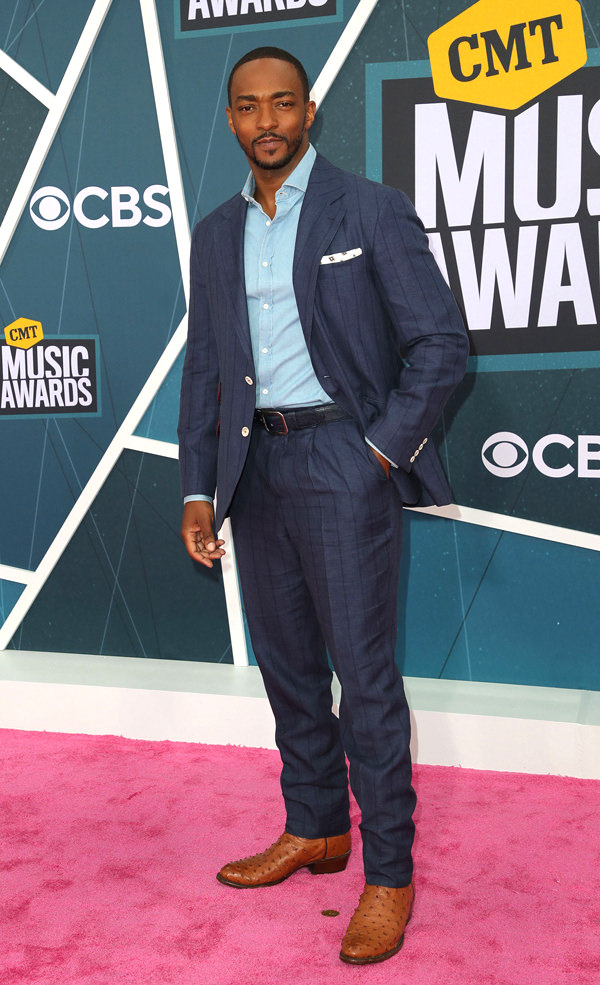 The ostrich boots are a nice touch, but he’s probably the best-dressed man on this red carpet. Not that we’re complaining; just that the gorgeous suit stands out a bit. This is kind of fun, but also kind of incomprehensible. We’re not sure why it has a cape (you don’t normally see short, superhero-style capes paired with jumpsuits) and we can’t tell if there’s a seam running down the front or there’s some sort of pleat or fold. Either way, why would it be placed there? Can’t argue with any of that. Great color. We’ve been seeing it a lot lately on the red carpet. We’re surprised to admit that we don’t…mind this? We might almost actually …like it? We’re just as surprised as you are, but something about the color story and minimalist design makes it work. To bad her hair’s such a mess. This has more personality than 90% of what she wears in public. She should get her Auntie Mame on more often. She wants you to know all about her leg routine (impressive) and her tanning regimen (extensive), going by this outfit. The invisible shoes are the perfect touch of tackiness to complete the look. We wonder if she spent all night fielding questions about what the “O” stands for. It’s an okay gown otherwise. Maybe there’s K on the back to drive that point home. The dudes never put the work in, leaving poor Kimberly and Karen to take up the slack. Both of the dresses look pretty great, although we hate tulip hems in all their forms. Karen’s shoes are pretty kickass, but they also look like they could fuck you up if you take one wrong step. It’s kind of cute, but it didn’t need the sheer gloves and the white mani-pedi is really jarring. Also, the bodice has a tongue for no reason we can fathom.

Maren Mooris (in Rasario) and Ryan Hurd (in Ted Baker) We love a giant man in mauve at a country music event, but his Pop-Pop slippers are too casual. Her look is okay for what it is. The current trend for formal crop tops works better with high-waisted skirts like this. The skirt is pretty, but the bodice has a terribly unflattering design. Resting on cute. And boots. They’re fine, though. It would be weird to complain that men aren’t dressed formally for a country show, even if every woman is turned out like she’s a finalist in a beauty pageant. When people ask you what camp is, you can point to Miss Naomi here as a perfect example. They just don’t make big-haired, big gown’d celebrity doyennes like they used to.