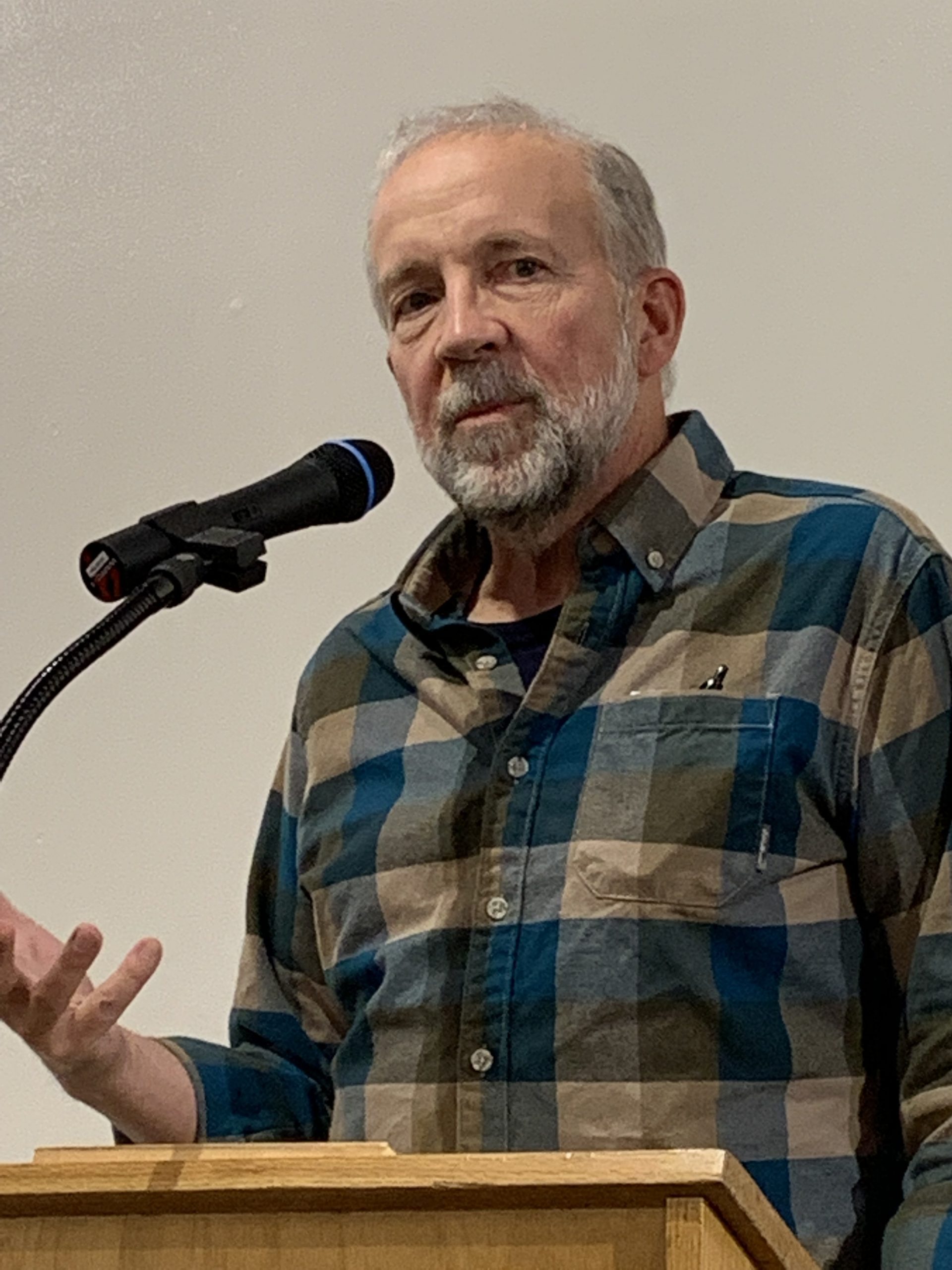 Over three decades after he flew to the Wrangell Mountains to cover the murders of six people in a mountainous ghost town, Tom Kizzia is back with a new book about the people who lived there, full of the joys and tragedies of life in McCarthy.

“We all have ghost towns, impermanent places we dream of returning to. Here was Alaska’s,” Kizzia writes in “Cold Mountain Path,” his intimate history of the people who stayed, and others who came and went, since the last train from the Kennecott Copper Corporation pulled out on Nov. 10, 1938.

“Cordova is part of this story; it comes up again and again,” Kizzia said in an interview following his

presentation on the book at the Pratt Museum in Homer in early November.

So too do the historic recollections of many folks who have called the McCarthy area home.

One of the detailed classics in this book, in chapter five, The Hippie Hole, tells of how the late Jim Edwards, whose recollections were a major contributor to the book, transported his wife and two small children from McCarthy to Anchorage and back to do some Christmas shopping in the winter

of 1963. The adventure involved a D-4 Cat, a Chevy, a truck, an airplane body and an empty welding -oxygen cylinder, all of which were scattered along the route after various mishaps, then retrieved on the way home. Edwards later wrote a colorful article about the trip for Alaska Sportsman magazine.

In the fall of 1973, when a road to McCarthy opened, the wall-to-wall Winnebagos were not well received, in part because some tourists were helping themselves to souvenirs left in the old mining town. The locals were saved when Hidden Creek Lake let loose with its annual flood and the new highway bridge suffered the same fate as the old railroad trestles, and the next summer damaged the new bridge as well.

Kizzia describes in detail the likes of folks like hippie pilot Sumner Putman, who greeted a delegation led by Interior Secretary Rogers Morton at the McCarthy airstrip one summer day on his bicycle, “to offer one-speed transportation for big shots only,” then rode Deputy Undersecretary Jack Horton into town on the handlebars of his bike. Putman’s abode, Kizzia notes, was a geodesic dome cabin with many of its dihedral angles later constructed of stolen plywood campaign signs for Congressman Don Young.

The vivid descriptions of some of these folks, their ingenuity and their pranks, will have some readers laughing; the somber details of the deaths of six residents at the hand of a lone gunman will have you on edge as the horror unfolds.

Kizzia’s introduction to that tragic day begins with a letter Amy Achenden to a hiking friend, describing her joy of being a newlywed and living in McCarthy. “The letter ended: ’I’d better close here if I’m to get it on this week’s mail plane. I think I could go on forever.’ The date at the top was February 28, 1983. The envelope, addressed and stamped, was on the table in their cabin the next morning, It was not mailed until four months later.”

Kizzia’s own personal history in the area goes back to 1973, when he came to Alaska with several fellow college students for some mountain climbing and floating the Copper River, after which the group hitchhiked into Cordova. Six years later he was back as a deckhand on a Prince William Sound fishing boat, fishing salmon on the Copper River Flats and the Coghill district.

In the summer of 1979, he spent a lot of time in Cordova, “one of my favorite Alaska towns,” and was back in the 1980s and 1990s covering the continuing saga over whether to build a road to Cordova,

He was back in the Wrangell Mountains again, as a reporter for the Anchorage Daily News, to write about a bizarre man who called himself Papa Pilgrim, who arrived in McCarthy with his wife and 15 children, and later wrote “Pilgrim’s Wilderness,” about the twisted Robert Hale (Papa Pilgrim’s real name), whose severe abuse of his entire family landed him in prison, where he later died.

Kizzia said his original transcript of the Pilgrim book contained some detailed history of the region which he later edited out, on the suggestion of his editor in New York, to keep the focus more on the Pilgrim family, but folks in McCarthy wanted more of the history.

The plan for a pamphlet to cover those details was altered as Kizzia garnered more and more of the ghost town’s detailed history, to become the new book.

In place of bibliographical notes at the back of the book, Kizzia includes copious notes documenting the details of each chapter.

“There are a lot of versions of some events and I wanted everyone to know which version I’m choosing, why I chose one version over another,” he said.

The book, published by Jeremy Pataky, of McCarthy, owner of Porphyry Press, was printed and bound in Canada on post-consumer recycled paper.

The post ‘Cold Mountain Path’: True tales of joy and tragedy in an Alaska ghost town appeared first on The Cordova Times.