Cold rain and some storms tonight through Thursday Morning

Unsettled weather across Texas will bring rain chances and much cooler temperatures over the next few days. Severe thunderstorms are not expected, nor is widespread flooding. There is a high likelihood that sweatshirts and rain boots will be needed, however.

Click any image in our article for a larger version.

Showers are already underway across sections of Northern Texas this morning. This afternoon, the trend will be for increasing showers and even a few thunderstorms in those same regions. Rain will become far more widespread later tonight and on Wednesday as the cool front starts to push south.

We’ll see numerous showers and thunderstorms across the southern two-thirds of Texas tonight through Wednesday Night. On Wednesday, pockets of heavier rain are more likely, with today’s activity remaining on the lighter, showery side.

As the cold front starts pushing out into the Gulf of Mexico tomorrow night, we’ll see rain chances start ending from north to south on Thursday. However, it does look like most folks will see rain after the frontal passage. 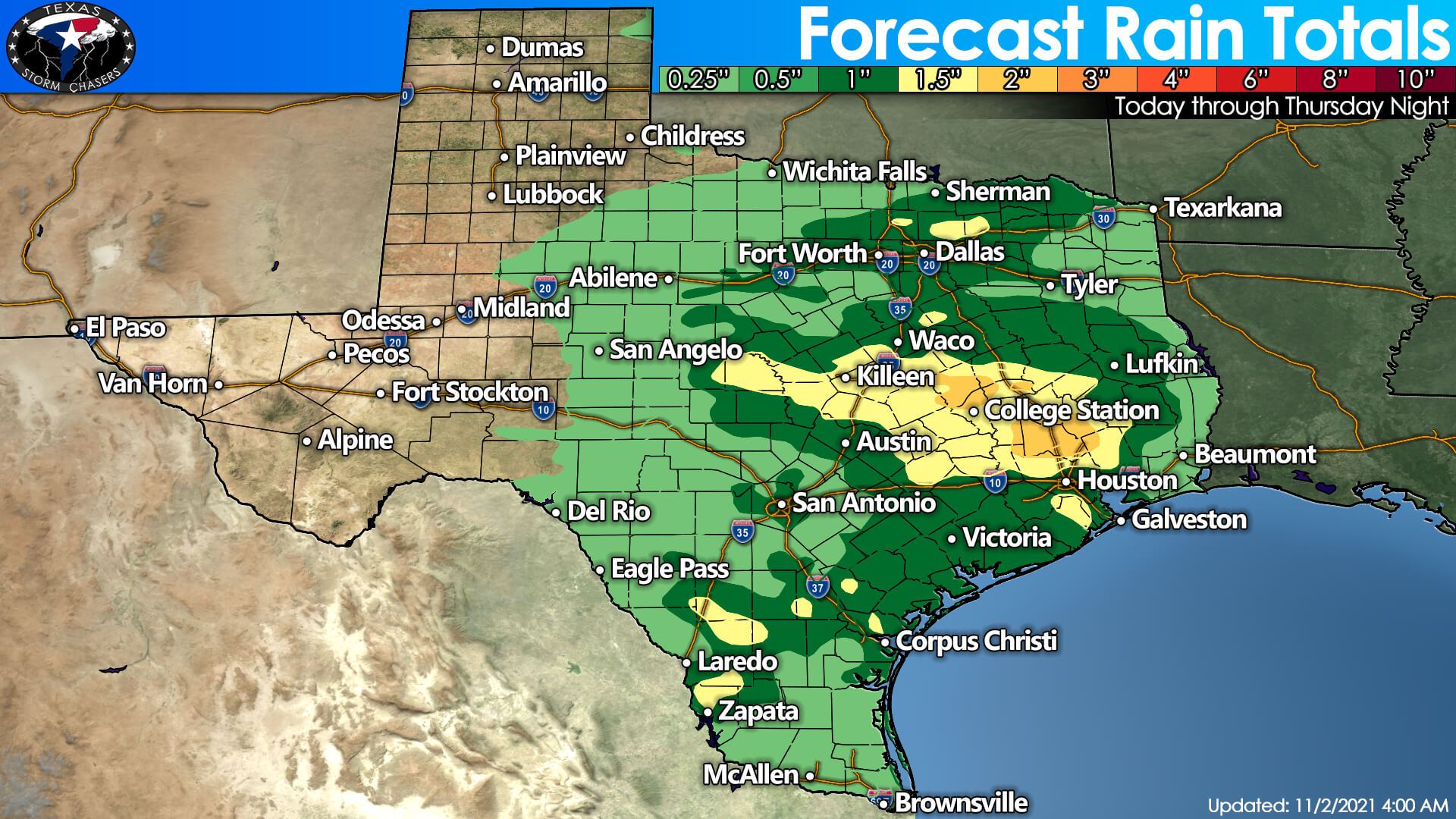 A cold rain with north winds dropping temperatures (or at least wind chills) into the 40s can be expected behind the front. Not exactly the nicest weather, but it sure beats dealing with tornadoes, hurricanes, or an ice storm. Isolated minor flooding (street flooding, high water across low-water crossings) is probable on Wednesday in North Texas, Central Texas, the Brazos Valley, and Southeast Texas. Precipitation chances end for all of Texas by Thursday night. However, most folks will north of Interstate 10 will be dry by lunchtime Thursday.

Speaking of winter mischief, we can’t rule out a few snowflakes across the northern Texas Panhandle tomorrow morning. Warm ground temperatures and the light nature of any snow should preclude any accumulations. No signs of nasty winter mischief are showing up in extended weather model data, so snow fans will have to keep waiting. 🙂

A cold front will remain nearly stationary through early this evening from the Trans-Pecos in West Texas eastward through the Concho Valley and Central Texas. Temperatures north of the front will be chilly, with north winds creating a bit of a wind chill. Warmer conditions will continue south of the front today.

Reinforcing cool and drier airmass arrives from the north tonight. The cold front will start booking it south toward the Texas Coast and South Texas on Wednesday. Said cold front will make it out into the Gulf of Mexico and south of the Rio Grande by Thursday morning as an area of high pressure starts to build in. Temperatures will begin climbing this Weekend, with daytime highs back up into the 60s, 70s, and 80s across Texas.

Cold rain and some storms tonight through Thursday Morning