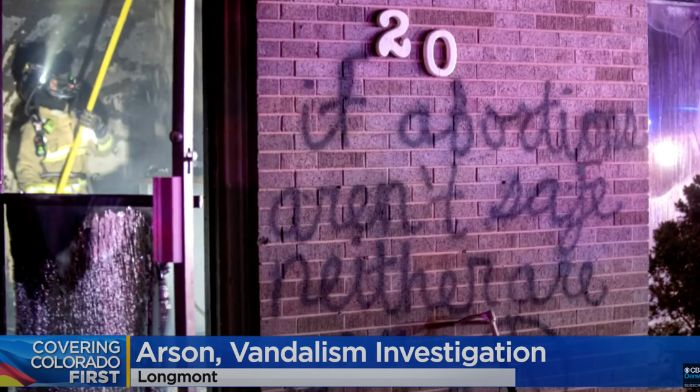 According to authorities, fire broke out around 3 a.m. Officials also said that the building sustained fire damage.

In addition to the fire, which authorities are investigating as arson, the front entrance to the building had been vandalized with black spray paint with symbols often used by Antifa, and a statement reading, “if abortions aren’t safe neither are you.”

That phrase has been found at the scene of other attacks, like the firebombing in Buffalo, New York.

Radical pro-abortion activists groups like “Jane’s Revenge” and “Ruth Sent Us” have taken credit for some of the attacks.

Protests and violence broke out in several cities over the weekend following the new landmark Supreme Court decision.

The violent rhetoric and protests by leftists pro-abortion activists has been escalating since a draft of the decision was leaked in May. While speculation abounds as to who might have leaked the document, there has been no recent information on the incident.

Earlier this month, an assassination attempt on Justice Brett Kavanugh was thwarted when a California man was arrested near Kavanaugh’s home in Maryland carrying such items as knives, a pistol, ammunition, pepper spray, and zip ties.

Since then, there have been attacks on crisis pregnancy centers and churches in at least 20 states and Washington D.C. The attacks have ranged from graffiti on the walls of centers and churches in Washington state and in the south, Molotov cocktails hurled at the pro-life Wisconsin Family Action Center, and a firebombing previous to the one in Colorado taking place in Buffalo, New York.

Abortion protesters also essentially held Arizona lawmakers hostage Friday night as they attempted to breach the State capitol building. Elected officials were told not to exit the building and tear gas was used to disperse the crowd.

Other Supreme Court Justices have had protests take place outside their homes.

In anticipation of the striking down of Roe v Wade, a far-left #Antifa-linked group named Jane’s Revenge carried out violent attacks on pregnancy resource centers across the US for weeks. Their current flyers in DC call for mass violence tonight: https://t.co/OioJvM0NUu pic.twitter.com/ezSL4YDuN6

RELATED: CNN’s Ana Navarro Uses Relatives With Down Syndrome, Autism To Defend Right To Have Abortions

Back in 2020, then Senate Minority Leader Chuck Schumer (D-NY) appeared to threaten Justices Kavanaugh and Neil Gorsuch should any abortion laws be rolled back.

After the decision on Friday, Rep. Alexandria Ocasio-Cortez (D-NY) called the Court “illegitimate” and encouraged pro-abortion activists to go “into the streets” to fight the ruling.

BREAKING: Congresswoman @AOC has arrived in front of the Supreme Court and is chanting that the Supreme Court’s decision to overturn Roe v Wade is “illegitimate” and calls for people to get “into the streets” | @TPUSA pic.twitter.com/jNkCYDrLtz

“The hell with the Supreme Court—we will defy them. Women will be in control of their bodies.” Then, referencing the crowd, said to reporters,”You see this out here? You ain’t seen nothing yet.”

Radical-Leftist Maxine Waters says “to hell with the Supreme Court, we will defy them!”

The FBI is assisting in the investigation in Colorado.

The ratio of left wing attacks on pregnancy centers to right wing attacks on Pride Events this month is increasing at a hyperbolic rate but you don't hear about the former because all of the people screaming about "tolerance" think those people actually deserve it.

Now is the time to support and share the sources you trust.
The Political Insider ranks #3 on Feedspot’s “100 Best Political Blogs and Websites.”