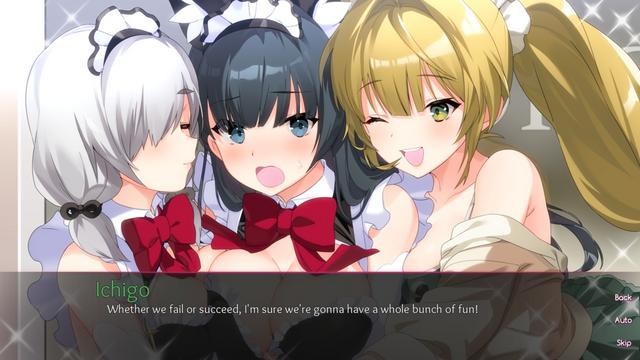 Comedy Visual Novel Would You Like to Run an Idol Café? Now Available on Consoles

A delinquent turns a new leaf in StarlightTree Games’ Would you like to run an idol café?, a comedy visual novel now available on the Nintendo Switch, as well as PlayStation 4 and PlayStation 5.

Would you like to run an idol café? is a romantic slice of life comedy that follows Yokoyama Naoya, a young man who used to be a delinquent and easily got into fights. Lately, he became wiser and decided to straighten out his life. Despite his best intentions, though, he wasn’t able to do much, failing to get into his chosen university.

This is when his childhood friend Suzuki Ichigo offers a helping hand allowing Naoya to move in with her. That said, he obviously doesn’t want to leech off a good friend. To repay Ichigo’s kindness, he looks for work, and ends up applying at a seaside café. Its owner Miss Miyamori sees Ichigo as a kindred soul and agrees to hire him on the spot.

To contribute to his new household and repay Ichigo for her kindness, Naoya begins working at the café with its two waitresses: Mayuki and Kuu. Mayuki tends to be a perfectionist, and gives Nayoa a hard time as he’s still learning to do the job right. On the other hand, she’s easily flustered, and tends to act clumsily when embarrassed. Kuu turns out to be even more quirky, usually being expressionless and rarely speaking, but also harboring a strong passion for supernatural matters. Only time will tell if Nayoa can find himself at home in his new lifestyle, between helping out Ichigo and working together with the two girls at the seaside café.

Would you like to run an idol café? is the first entry in a series of ecchi visual novels. While originally only available on the PC, it has now been published by Gamizumi on the Nintendo Switch, PlayStation 4, and PlayStation 5.

Suzuki Ichigo is Naoya's childhood friend. Their families are close friends, and the pair have known one another since they were little kids. They were once so close, Naoya's mother often joked about them getting married.

Naoya and Ichigo were briefly estranged during high school, during Naoya's rebellious phase, but now they are just as close as they ever were.

Ichigo is boisterous and energetic, but she's very good at cooking. Other domestic chores, however, are outside her scope, and her scatterbrained nature leads her to misplacing things on a constant basis.

She's a huge fan of idols, and her bedroom is full of idol-related paraphernalia.

Shinonome Mayuki is a waitress who works at Miss Miyamori's beachside café. Stern and haughty, she demands nothing but perfection from others. She scolds Naoya for his each and every mishap during his first week on the job, and seems constantly in a bad mood.

Mayuki has a soft side, though, and is easily flustered when complimented. She is not immune to making mistakes herself, and drops things when she gets embarrassed, to her chagrin.

Mayuki is particularly fond of cats, which she seems to hold in higher esteem than she does other people.

Yamashiro Kuina, known to her friends as Kuu, works with Mayuki at Miss Miyamori's beachside café. She is an enigmatic girl of few words, who is rarely seen without her favorite pack of tarot cards.

Kuu is an ardent believer in the spirit world, and when she does speak, she often talks about ghosts and ghouls. She claims that she can see into the future, but her predictions are always on the dour side.

Kuu's face is often expressionless, her voice monotonous, which makes her incredibly hard to read. What, exactly, lies behind her impenetrable exterior?

The ecchi, non-eroge version of Would you like to run an idol cafe? is now available on the Nintendo eShop for the promotional price of $7.99, where it will cost $9.99 after the sale ends on December 12th. The visual novel can also be purchased on the PlayStation Store for $9.99.

The PC version of the Would you like to run an idol café?, as well as its sequel, are both available on Steam for the promotional price of $5.99, with the sequel priced at $6.99. Once December 1st rolls around, both will return to their usual $9.99. Optional adult content is available for the PC version of the game, but has to be installed separately using a patch found on Winged Cloud’s Patreon.

Comedy Visual Novel Would You Like to Run an Idol Café? Now Available on Consoles