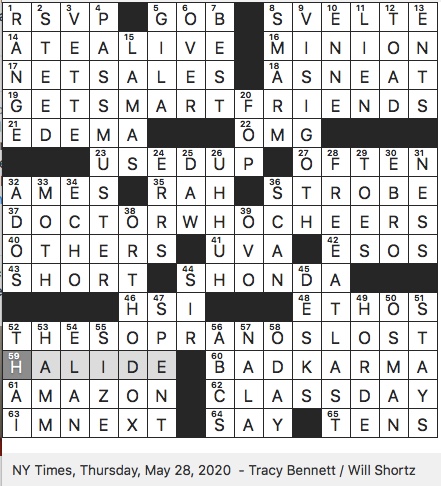 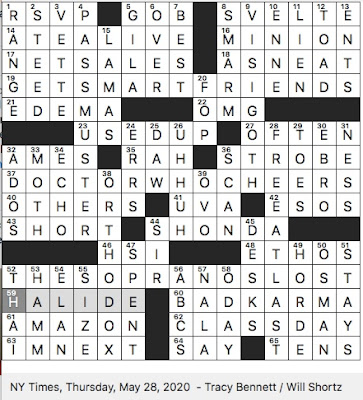 THEME: wacky phrases made up of two TV show titles —

Zhu Xi ([ʈʂú ɕí]; Chinese: 朱熹; October 18, 1130 – April 23, 1200), also known by his courtesy name Yuanhui (or Zhonghui), and self-titled Hui'an, was a Chinese calligrapher, historian, philosopher, politician, and writer of the Song dynasty. He was a Confucian scholar who founded what later became known as the "learning of principle" or "rationalist" school (lixue 理學) and was the most influential Neo-Confucian in China. His contributions to Chinese philosophy including his editing of and commentaries to the Four Books, which later formed the curriculum of the civil service exam in Imperial China from 1313 to 1905; and his emphasis on the process of the "investigation of things" (gewu 格物) and meditation as a method for self cultivation.
Zhu has been described [as] the second most influential thinker in Chinese history, after Confucius himself. He was a scholar with a wide learning in the classics, commentaries, histories and other writings of his predecessors. In his lifetime he was able to serve multiple times as an government official, although he avoided public office for most of his adult life.[1] He also wrote, compiled and edited almost a hundred books and corresponded with dozens of other scholars. He acted as a teacher to groups of students, many who chose to study under him for years. He built upon the teachings of the Cheng brothers and others; and further developed their metaphysical theories in regards to principle (li 理) and vital force (qi 氣). His followers recorded thousands of his conversations in writing.

This felt like a Wednesday theme living in a Friday grid. I guess that averages out to a Thursday, but still this lacked the usual Thursday sass / trickery. It's just ... two TV shows pushed together and imagined as wacky phrases. Seems like something you could do and do and do and do, i.e. the themer set is pretty arbitrary. They're all 15s, so that's ... something. But one's an imperative sentence, one's a noun phrase, and one's a declarative sentence. The types (genres) of shows involved are all over the map. It all just didn't feel coherent enough. And the low word-count grid is odd. Feels like a weird way to build in some added difficulty, since the theme doesn't really offer any. But you can get difficulty just from cluing so ... not sure why the word count is way down at themeless levels (72). It doesn't allow for much exceptional fill—if anything, the grid feels strained in parts; low word counts are good for themelesses because themelesses don't have ... themes ... putting pressure on the grid. I liked BAD KARMA and the clue on MOTH (which really tricked me) (33D: Bulb circler) and not a lot else. Didn't strongly dislike much either. Just think it missed the Thursday sweet spot.

[famously deep-voiced, thus ... sopranos are gonna struggle, I guess]
Grid was more crosswordesey than I'd like (NESS ENNE ESOS EDEMA EBRO AMES ENTS RAH DAW OVO HSI NALA ADOS). Had trouble with HSI HALIDE and OSMAN, and because HSI and HALIDE were in the same corner (SW), and that corner also had the ridiculously clued ORTHODOX in it (38D: Keenly observant), that was definitely the roughest part of the grid for me. I get that "Keenly" is supposed to mean "very" here, but you'd never use "keenly observant" to describe someone's religiosity. The only reason "keenly" is there is to make you think a different type of "observant" is intended. I have no problem with that kind of head fake if the clue you offer is in fact plausible. "Keenly" is just a clunk of an adverb to use in this context. The clue feels like cheap trickery, as opposed to the good trickery of, SAY, the clue on MOTH (33D: Bulb circler). There's ambiguity as to what type of bulb is meant, as to what "circling" might mean in this context, etc. I went from "what the hell...?" to "Oh! Oh, that's good." And that is the trajectory you want on a tough / tricky clue. ASNEAT is truly gruesome fill—no AS[adjective] is ever going to be good. Ever. Ever. I've seen lots of them (ASRED, ASBAD, etc.) and ASNEAT is up there with the worst. Just not a stand-alone phrase. FREE AT LAST, on the other hand, stands alone reasonably well, despite being just a fragment—MLK repeats that phrase to great dramatic effect, so it has suitable heft.