In light of the House and its continuing moves to impeach Donald Trump, there is a factor of American political theatre that receives very little coverage.  Let's open this posting by looking at a rarely discussed American election metric.  Here is a graphic from Open Secrets showing the re-election rates for the House going back to 1964:

Over the five plus decades since 1964, the House re-election rate has never fallen below 85 percent, hitting that level most recently in the 2010 mid-term elections.
Here is a graphic showing the re-election rates for the Senate going back to 1964: 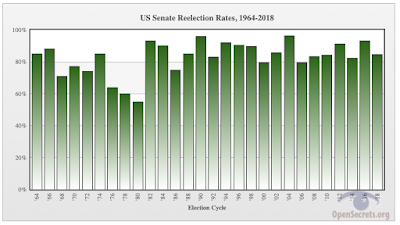 While Senate races clearly favour the incumbent, there are occasional years where the pendulum swings dramatically as we see in 1980 when the Reagan presidency began.  Since the early mid-1980s, the Senate re-election rate has never fallen below 79 percent (2000 and 2006 elections)
Now, let's look at how American voters feel about their Congressional representatives, the majority of whom are incumbents.  Here is a graphic showing the history of the approval rating for the members of Congress in the United States:

Here is Gallup's monthly Congressional approval rating since the beginning of the Trump Administration: 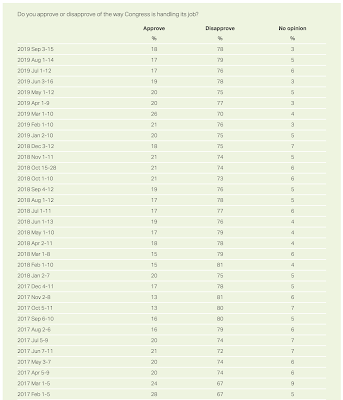 As you can see, the vast majority of Americans disapprove of the way that Congress is handling its job responsibilities.
Here is a table from Gallup showing how much confidence Americans have in Congress going back to 1973: 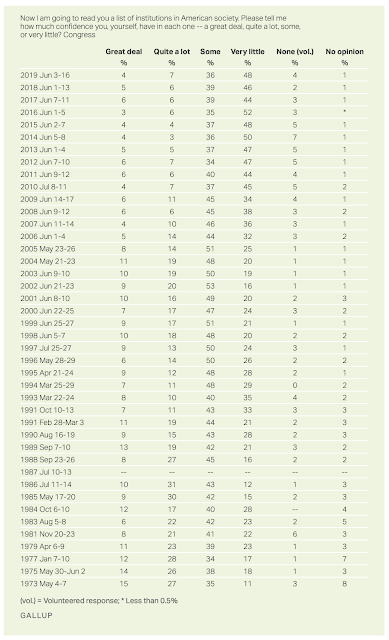 The percentage of Americans that have very little confidence in Congress has risen from between 11 and 23 percent in the 1970s to its current level of 48 percent (June 2018 data).  The percent of voters that have a great deal or quite a lot of confidence in Congress has fallen from 42 percent in 1973 to its current level of 11 percent after hitting a low of 7 percent in 2014.
We can break the data down further.  Here is a table showing the percentage of American that approve or disapprove of the way that the Republicans in Congress are handling their job responsibilities going back to 1999: 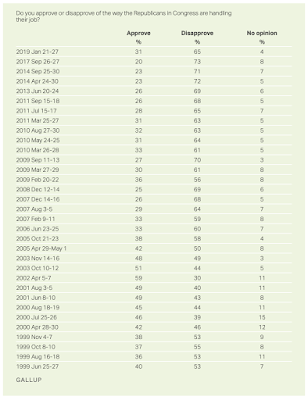 Here is a table showing the percentage of American that approve or disapprove of the way that the Democrats in Congress are handling their job responsibilities going back to 1999: 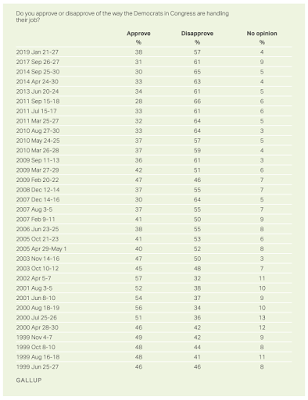 With this data in mind, let's look at another very rarely discussed metric, the length of time served by Congressional incumbents.  Here is a table showing the longest serving members of the House: 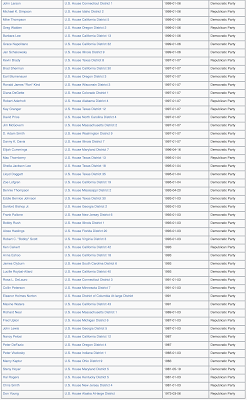 Here is a table showing the longest serving members of the Senate: 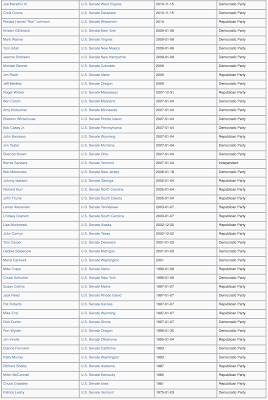 Let's put all of this together.  It is a basic rule of thumb that incumbents for Congressional election races are nearly guaranteed re-election, leading to a reality where certain members of Congress have been re-elected for decades and yet, the approval rating for Congress is pathetic at best.
There is a potential solution to this conundrum - term limits for Congress.   An organization, U.S. Term Limits (USTL) based in Washington, D.C. is advocating for term limits at all levels of government.  Here's what they have to say about their organization and how the Constitution can be amended to reflect term limits:
"In 2016, USTL launched the Term Limits Convention, a new project to enact a constitutional amendment for congressional term limits. Under this approach, state legislators can enact term limits for the Congress in Washington and no member of Congress can stop them.
USTL continues to be at the forefront of the term limits movement. Using the citizen initiative as its most potent tool, the term limits movement is considered to be the most successful grassroots movements in American history. To this day, voters in states and municipalities across the country are enacting and reaffirming term limit laws one election cycle after another.
It can happen in one of two ways. First, Congress can propose the amendment with a two-thirds vote. Currently, Representative Ron DeSantis of Florida and Senator Ted Cruz of Texas are sponsoring the USTL amendment on Capitol Hill. It calls for a three-term (six year) limit on representatives and a two-term (12 year) limit on senators. USTL asks all candidates for congress to sign a pledge in support of this amendment.
If Congress refuses to pass term limits on itself, citizens and activists can use the Term Limits Convention. The Term Limits Convention allows 34 state legislatures to convene a meeting to write an amendment for congressional term limits. The process bypasses Washington and allows the people and the states to impose congressional term limits."
Here is the petition: 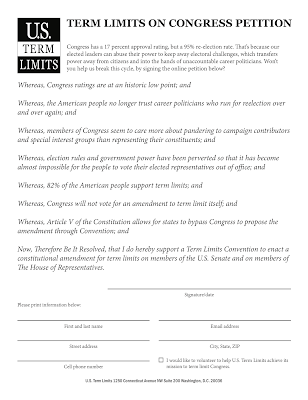 You can take action by signing the USTL petition here.  According to USTL, they have nearly one million signatures on their term limits petition.
Let's close with this quote from a blog posting on USTL:
"U.S. lawmakers face glaring conflicts of interest setting policy for companies they are supposed to regulate.
Although not illegal, there is a perception of impropriety because it is impossible to be impartial on issues affecting your own personal wealth or the wealth of family members, especially when millions of dollars are at play.
Most of the stocks owned by the fifty-one senators are in five key sectors:
communications/electronics;
defense;
energy and natural resources;
finance, insurance and real estate; and
health.
According to last week’s investigative report, ten members of the Senate banking committee own a total of as much as $8 million in stock in companies in the finance, securities, and real estate sector.
Other senators on the housing and urban affairs committee have millions vested in real estate.
The median net worth of a senator is approximately $3.2 million. According to Market Watch, the median net worth of the average U.S. household is $97,300.
US lawmakers are disproportionately wealthier than their constituents and growing wealthier. This inequity makes it impossible for members of the Senate to have any empathy in the average American experience.
It’s no wonder Americans overwhelmingly disapprove of Congress and don’t believe their representatives share their priorities." (my bold)

As is typical of politicians around the world, once they are elected to office, they start to feel as though government belongs to them and is for their benefit alone.  We need to send them a message to tell them that government is for the people, not for the select few.  Congressional term limits are a good place to start.