.NET continues to improve its Unix/Linux support in .NET 7. One of the aspects that was improved in RC1 was Console.ReadKey, which has been rewritten from scratch. Key combinations are more accurately handled across many Linux distros and terminals, and modifier keys are especially improved.

Developers expect APIs as fundamental as Console.ReadKey to be dependable. This building block for interactive console applications had accumulated many bug reports over the years though, all related to running on Unix/Linux platforms. The bugs varied in severity and complexity, but there was a common thread: key combinations and modifier keys were especially unpredictable.

With .NET 7, all known bugs related to recognizing keys pressed inside Console.ReadKey on Unix/Linux were addressed. This article covers the engineering effort that accomplished this and also has a Summary of what was changed.

Ensuring the new version is successful

Changing such crucial methods as Console.ReadKey is always risky and we speak out of our own experience, as we have reverted similar fixes in the past. In order to lower a chance for introducing new bugs, the rewrite was started with increasing automated test coverage.

The first step through this goal was refactoring the code and making it testable. To tell the long story short, base class libraries like System.Console can’t easily use mocking, as this would require creating a new abstraction, exposing new APIs just for the sake of testability and last but not least a performance hit (most of the abstractions comes at a price of at least one more virtual method invocation). Instead of that, a new internal KeyParser type was created and the unit test project just includes it (<Compile Include="..\src\System\IO\KeyParser.cs" Link="src\System\IO\KeyParser.cs" />).

The next step was writing a command line application for recording test data and generating unit tests. The job of the app was simple:

The next step was running this app and recording test data for all terminals for which our customers have reported Console.ReadKey bugs in the past:

At this moment of time, the generated test file was almost 2k lines long and at the same time almost one thousand of tests were failing. The failures included known bugs, but also things that were previously not reported by the users (mostly unusual key combinations like Ctrl+Shift+Alt+$key).

Question to the readers: have we missed any popular Unix terminals? Please let us know in the comments!

When a keyboard key is pressed, it’s translated into an event. The event can be handled by the OS, which also forwards it to the terminal (or other GUI app). If a given key combination is not used by the terminal as one of its own key shortcuts, it’s forwarded to the app itself.

Some key combinations like Alt+F4 are by default taken by the Operating System.

They are being handled by the Operating System and most of the terminals don’t try to intercept them. It’s not true for all of them, as for example GNOME Terminal gives the user the possibility to cancel window closing:

Another good example is F11, which toggles the Fullscreen mode in most Unix terminals.

You need to know that some key combinations are reserved by the OS or terminal and Console.ReadKey won’t be able to return when these keys are pressed. These key combinations can be distro- and terminal-specific and you need to take this into account when choosing key mappings for your command line application, so it works well in every environment.

These sys-calls are also used by showkey, which is a well-know Linux command line utility for printing keycodes, scancodes, or ASCII codes of keys pressed on the keyboard. Its implementation is very simple: it uses tcsetattr to set its own settings with echoing enabled and read for reading 1 byte at a time. Every byte from the user input is printed in decimal, octal and hexadecimal form to standard output.

Let’s run showkey -a and press a, 1, F1, Home and Ctrl+Alt+Shift+F12 to see how they are mapped by the terminal: 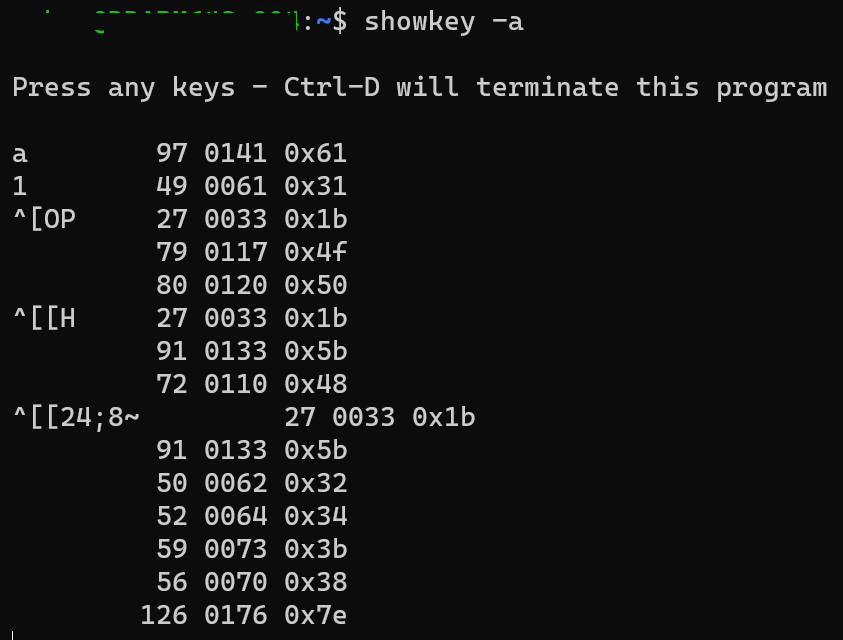 The output printed for simple keys like a or 1 is just their ASCII representation. But more complex keys are mapped to terminal input sequences. Moreover, most terminals implement their own mappings for various keys. And Console.ReadKey needs to handle all of them (at least the most popular ones).

This is perfectly valid solution, the problem is that it’s not complete as terminfo does not define mappings for all keys pressed with key modifiers (Alt/Ctrl/Shift). That is why some users were hitting issues like #45597 where End was mapped correctly but Shift+End was not.

Another problem with relying only on terminfo files is caused by terminals that allow to set TERM environment variable to a terminal that does not represent the key mappings that they are using. A good example of such terminal is PuTTY, which makes it possible to set TERM to certain terminal like xterm (the default value is not putty): and at the same time use key mappings defined by different terminal like SCO: Example: for this config pressing PageUp is mapped to ESC[I (SCO), rather than ESC[5~(xterm).

Moreover, to get NumLock to work as expected with PuTTY, users need to disable application keypad mode.

The new implementation extended the previous one with a fallback to well known input sequences mappings.

Example: when xterm user presses Ctrl+Shift+Alt+F12 and read populates the buffer with ESC[24;8~, Console.ReadKey tries to find this mapping in terminfo. It’s not found, so it searches for known patterns. It recognizes that it can be an xterm sequence (it ends with ~), maps the key (24) to F12 key and the modifier (8) to Ctrl+Shift+Alt.

If it fails to recognize the pattern, it returns full raw ASCII representation. Example: the user pastes ESC[99;9~ to the terminal. The first call to Console.ReadKey returns Escape, second [, third and fourth 9, sixth ;, seventh 9 and eighth ~.

The new implementation still has some limitations and they are all derived from Unix terminals:

The rewrite did not include any breaking changes, but you can request .NET 6 compatibility mode in runtimeconfig.json:

Or using the following environment variable:

This compatibility mode is going to be removed in .NET 8. Please let us know if you discover any bugs related to the new implementation, so they can be fixed before it happens.

When you upgrade to .NET 7, you should see substantial accuracy improvements in System.Console.ReadKey on Unix: