COPPER PRODUCERS LOOK PAST THE RECESSION;WHO HAS THE BEST ALPHA

A few weeks back I laid out the case for copper.

Yes, we are probably going into recession.  Yes, that means at least a bit more weakness for copper and copper stocks (most copper stocks fell 50% in three months this summer).

But on the other side, as electrification and EV adoption take center stage, copper will be in demand.  As Bloomberg pointed out in a recent article, we may be starting to see that already. In the article John Paulsen, Chief Investment Strategist of Leuthold Group, made note that the copper/gold ratio is reaching a point that suggests growing confidence in the metal and usually precedes a move up.

If that’s right, now is the time to make a list of copper stocks.

That’s what I have been doing.  I’ve worked my way through the producing universe of copper companies listed in Canada or the United States.

Second, it is hard to find the perfect play.  At least on the junior end of the spectrum. Every junior has some hair.

Of course, that can also mean opportunity for the diligent stockpicker to find that diamond in the rough.

But if you are looking for a simple play on the price of copper, it is a tougher find.

The risks fall into one 3 buckets:

In this post I’ll go through a few names, highlighting the good and the bad.  Start making that list so I’m ready to buy when the time comes.

The mine produced 27 million pounds of copper in H1 22.  That is barely half what it did the year before.

The problems have been twofold.  Lower grades and equipment failures.

The lower grades were expected.  It was mine sequencing and lumpy production is what you get with a single mine operation.

The equipment failures were not.  The mine’s secondary crushing unit was damaged in Q4.  Production still has not recovered from that.

Q2 results brought a painful guide down–from 80-90 million lbs in February guidance (this was after they knew about the crusher failure) to only 65-75 million lbs as of July!

Copper Mountain has a late-stage development project – Eva – but before we can even talk about financing it (it’s not cheap – A$850 million in 2020, likely higher now), they need to get their mine turned around.

These are the risk of a single mine operation, and they aren’t limited to just Copper Mountain.

At Taseko Mines (TKO – TSX), the Gibraltar mine has suffered from production problems of its own.

Mine sequencing is again the culprit. Lower grade zones led to a 0.17% Copper head-grade in H1, down from 0.28% a year earlier (this is a low-grade porphyry deposit).

Higher grade sequencing should lead to more pounds of copper in H2.  I believe it.  Gibraltar has been a reliable producer for years.

The question with Taseko is their development project – the Florence in Arizona.

Taseko is expecting permits at Florence in H2.  It just might happen.  They received a positive draft permit a few weeks ago, which bodes well.

If Florence is permitted the question will shift to building it.

The budget for Florence was originally US$230 million and is likely higher today. That’s a lot for a company with a $400 million market cap.  Taseko has cash – $175 million of it – but also a lot of debt – over $500 million.

The debt and Capex needs mean Taseko will be walking a tightrope, particularly if copper prices stay weak for a while.

While small, single mine producers may struggle to self-fund their growth, bigger producers like Capstone Copper (CS – TSX) should have an easier time of it.

Capstone has four producing assets: Pinto Valley in Arizona, Cozamin in Mexico and Mantos Blancos and Mantoverde, both in Chile.

Together these assets, along with their Santo Domingo project in Chile, set up an impressive growth profile over the next few years. 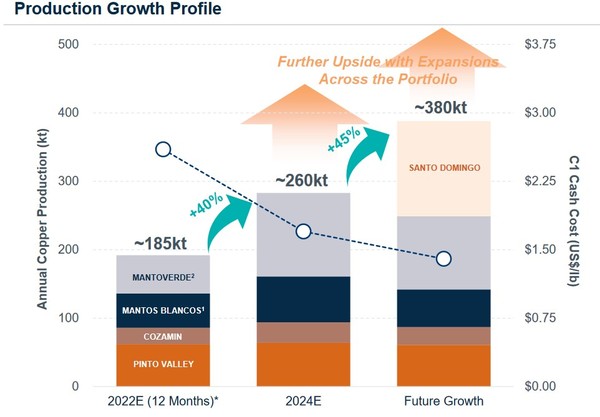 Capstone’s risk is location, which surprisingly is Chile.  Chile has historically been a safe place to mine, but that changed with the election of the current government, which has talked taxes and re-permiting.

The Chilean government is proposing a royalty tax for producers that produce >110 million pounds of copper.  It is a price-based formula that could be as high as 32% on operating margin if copper exceeds $5.

With the expansion of their Mantoverde mine, Capstone would be over that threshold.

Once their Santo Domingo project is in production (still probably 5 years off), about ¾ of Capstone’s production will come from Chile.

However its not all doom and gloom.  Last week the Chilean people had a referendum vote where they rejected a new constitution.

The constitution would have been unfavorable for mining companies.  The focus was the environment, which would have made permitting a new mine much more difficult.

The defeat puts the government back on their heels. But Chile comes with other risks.  For one–water.

Water is in short supply through much of Chile.  Yet copper mining needs a lot of it.

The Mantos Blancos mine depends on water that comes from government concessions.  While the current water supply agreement is good until 2025, if it isn’t extended Capstone will be scrambling for another solution.  Mantos Blancos is about 30% of Capstone’s copper production.

Amerigo Resources (ARG -TSX) is in the same boat, one that may ground ashore.

Amerigo has more immediate water worries than Capstone.  Taken from their own presentation, Amerigo estimates they have water for 18 months.

Amerigo has been a steady producer and gives a nice dividend.  But the water is a worry in the long-run.

While Amerigo says there is nothing to worry about, I worry because 18 months is not a long time.  I wonder about the long-term plan if the drought persists.

HUDBAY MINING – A WORLD OF COPPER

Hudbay Mining (HBM – TSX) has operating mines in Manitoba and Peru.   They have two large development projects in the United States.

Hudbay plans to grow production both this year and next.  Because of by-product credits, cash costs will decline to close to $0.


That translates into free cash flow.  Hudbay has one of the best free cash profiles over the next few years.

The first risk is political, in this case, Peru.  But while Peru is far from perfect, it is so bad it may be good?!?

Peru’s left-leaning government has had to pull back from their tough talk (nationalization, big taxes) that got them elected.  Right now the government is having enough trouble just keeping power.

There are corruption issues–the prime minister resigned and there was an impeachment vote.  It is too much disarray to drive sweeping reforms.

Hudbay’s second risk is permitting.  They have had their own issues permitting in Arizona.

Hudbay’s Copper World project is the going to drive future growth.  It is an open pit project, low cash costs ($1.15 per pound), and will produce 190 million pounds of copper per year (compare this to the 255 million pounds Hudbay will produce this year).

Bu part of the Copper World project lies on Federal lands.  While permits were issued, they have since been reversed by a District Court ruling.  That decision was upheld in an Appeals court this year.

Hudbay pivoted by focusing on private lands.  They can operate a 15-year mine life before they need to tap the Federal land.   The entire project has a 44-year mine life.

The focus on the private lands only should mean an easier permitting process.  But as Hudbay said on their Q4 2021 conference call, they “have the interest of the environmental crowd”.

Given the landscape, maybe the best way to play copper is just to KISS – keep it simple stupid.

Freeport is the biggest copper play by some margin.  They will produce 4.2 billion pounds this year, 4.45 billion next year.  That is a little under 10% of global supply.

They are also a low-cost producer.  While cost ballooned at many junior operations, Freeport put in a $1.41 cash cost number in Q2.

Being the biggest and low-cost copper producer, Freeport should trade at a premium valuation – and they do.  But not as much as you might expect. 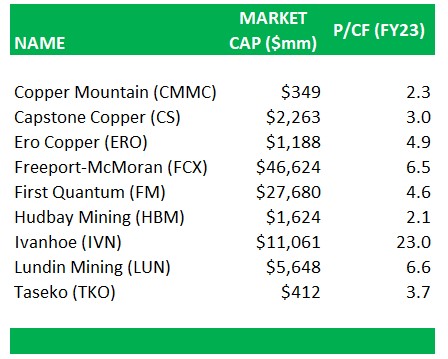 Smaller names can be as much as half the valuation.  But they all have risks that Freeport does not.

YOU GET WHAT YOU PAY FOR

With Freeport’s diversity of low-cost production, they are better prepared to survive a prolonged bear market.  In fact, they will still generate cash.

The capex and cash flow estimates below come from the #2 Canadian brokerage firm, BMO.  Their tables assume $3.50 copper for ’23 and ’24. 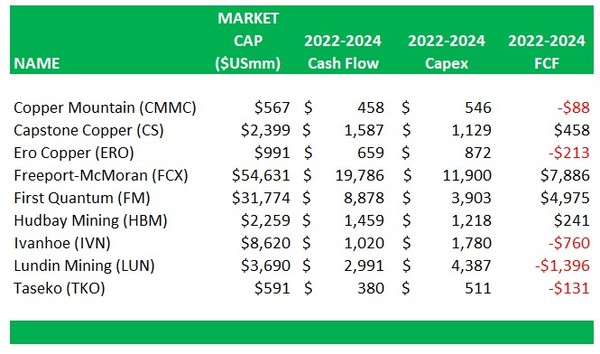 Freeport is the safest.  Hudbay and Capstone give you multiple mines, some future growth, and free cash flow.

Taseko and Copper Mountain need to turn it around, but they could turn out to be triples when copper turns.

There is something there for everyone.  It just depends on how much risk you want to take.

COPPER PRODUCERS LOOK PAST THE RECESSION;WHO HAS THE BEST ALPHA