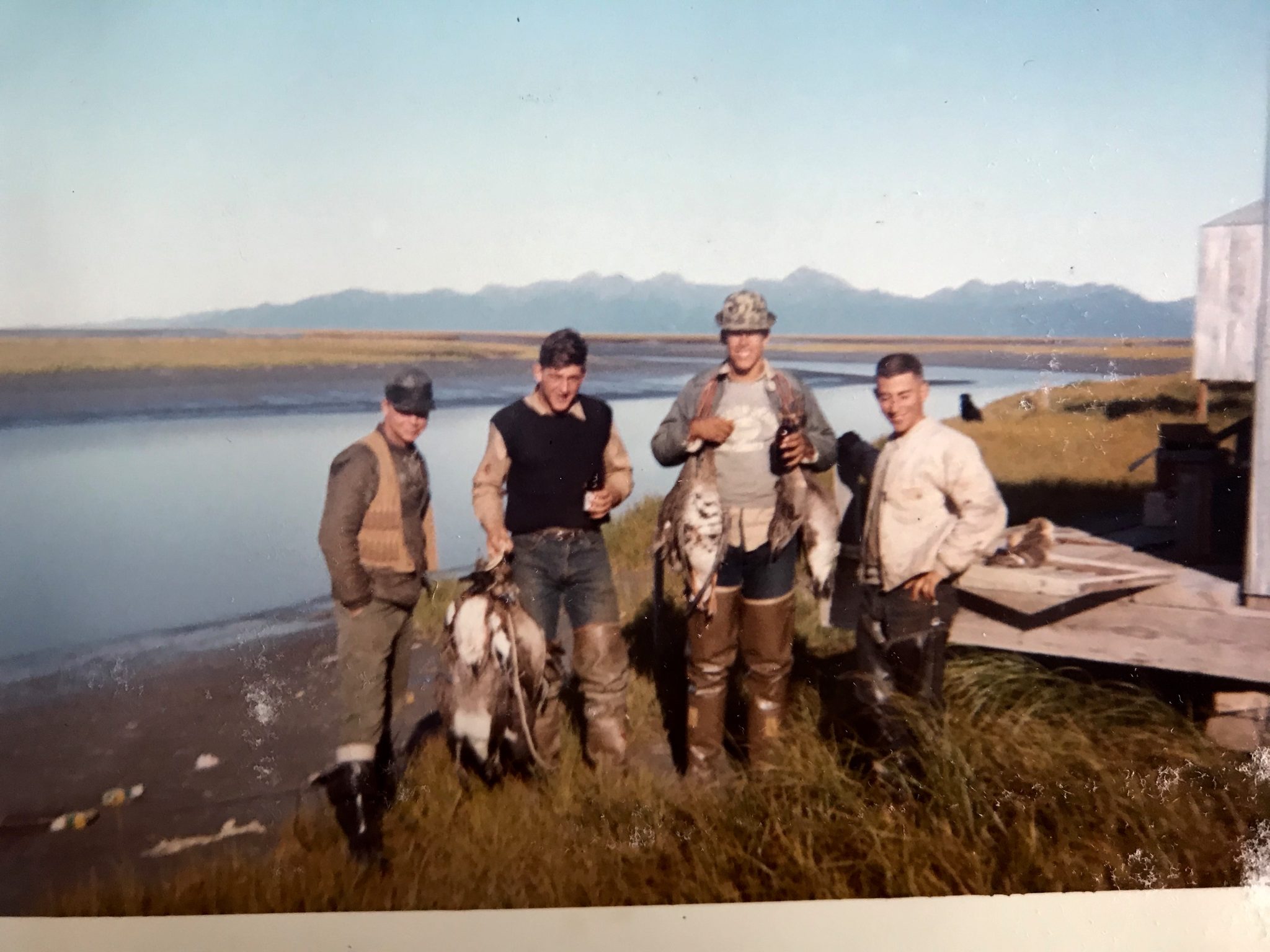 With the USFS Million Dollar Bridge Recreation Area at Mile 52 no longer accessible due to the washout at Mile 36, Alaganik Landing has become the most popular recreational spot on the Copper River Highway.

The Landing is located at the end of a three-mile road that branches off the highway at Mile 17.

This fall, between sports fishermen, campers, picnickers, and duck and moose hunters, all its designated slots and the parking lot were often so full there were no places to park, with overlapping vehicles strung back up the road or parallel to each other in the main area.

It wasn’t always so.

In fact, the road itself didn’t even exist until the mid-1960s.

The forces that lead to its construction were an unlikely combination of ecological events and the enthusiasm of local duck hunters.

During the Copper River and Northwestern Railway days, from 1906 to 1938, the most common way for hunters and fishermen to access the Delta was by crossing Eyak Lake and motoring down Eyak River.

A number of cabins located at the mouth of the Eyak housed commercial fishermen in the summer. They, along with cabins at nearby canneries and tributaries, were then used by duck hunters in the fall.

In his entertaining booklet titled “The Cordova That I Knew,” A.C. Swalling, who arrived in Cordova in 1929 with not much more than the shirt on his back and eventually became in charge of maintenance of many of the Copper River and Northwestern Railway buildings along its route, wrote: “When September 1st would roll around, it seemed every able-bodied male, including young lads old enough to carry a shotgun, and even many women, would head for the Eyak and Copper River flats to hunt ducks and geese.”

When the Railway shut down in 1938, World War II was on the horizon, and in 1940 the abandoned railroad and stock were quickly re-activated to provide access for the construction of a military airport at Mile 13.

After the war ended, the railroad bed was gradually converted to a one-lane gravel highway, with turnouts to allow vehicles to pass and wooden planks laid over temporary railroad bridges.

By the early 1950s, the gravel road had reached all the way to the junction of McKinley River and Alaganik Slough at Mile 22. Tides reached up that far, and for years several cabins and a trading post were located on the banks of the slough. A photo from the early days showed a sternwheeler tied up there.

The extended road meant vast waterfowl habitat on the eastern end of the Delta that could formerly be reached only by going down Eyak River and crossing often treacherous open water was accessible where Alaganik Slough skirted the road, or down a narrow slough about a mile beyond the entrance of today’s Haystack Trail at Mile 19. During duck season, that tidal gutter was often filled with boats tied off the guard rails of a bridge over it.

Yippee. Duck hunters began running small skiffs down Alaganik to fabulous hunting on the edges of the flats, and in the process building duck shacks hither and yon without any restrictions. Eventually, the USFS put a halt to their construction, and all of today’s cabins on the Delta are under their management.

Yet for over a decade, hunters returned after weekends with stories of legendary shoots at places called Wallhalla, Pete Dahl, Whiskey Pete, Tiedeman, and Glacier.

That ended in 1964. In March of that year, the Good Friday Earthquake uplifted the entire Delta roughly nine feet. Suddenly the intertidal sloughs were that much shallower. In fact, getting down Alaganik from the edges of the road was impossible.

Aghast at the prospect of no plump mallards for their ovens, the Cordova duck hunting lobby shifted into full gear, pleading for a road to access the navigable upper reaches of the tide in Alaganik Slough, which were now several miles below the road.

With a speed that seems unbelievable given the bureaucracies of today, by spring of the following year the USFS had local contractor Fred Pettingill and his Eyak Construction crew pioneering today’s Alaganik Landing Road. The winding gravel road was completed in the fall of 1966 and has been gradually improved over the years.

It is interesting to note that originally it was called the Snag Point Road, as it was intended to extend to that location, which is about a half mile further down the slough.

Today’s updated version of the landing area, with an excellent boat ramp, parking, camping pullouts, and other facilities, is understandably a major attraction for a variety of recreational users.

But it all started because of a bunch of avid Cordova duck hunters.

Swalling described their motivation well. “It wasn’t only the birds for the larder that counted, but the freedom from the daily grind, as well as the special camaraderie that the outing produced.”

Over the ensuing 55 years, gradual silting and sedimentation have made the sloughs and rivers more challenging to navigate. Hunters of yore would be amazed at the size and power of jet-powered boats that now race down Alaganik and Eyak, often in water only six inches deep.

Yet there is much truth to the saying “What a hunter won’t do for a duck.”

Half a century later, the Alaganik Slough Recreation Area, born because of ducks, provides for that, and much more.

The post Cordova Chronicles: Thanks, ducks, for Alaganik Landing appeared first on The Cordova Times.