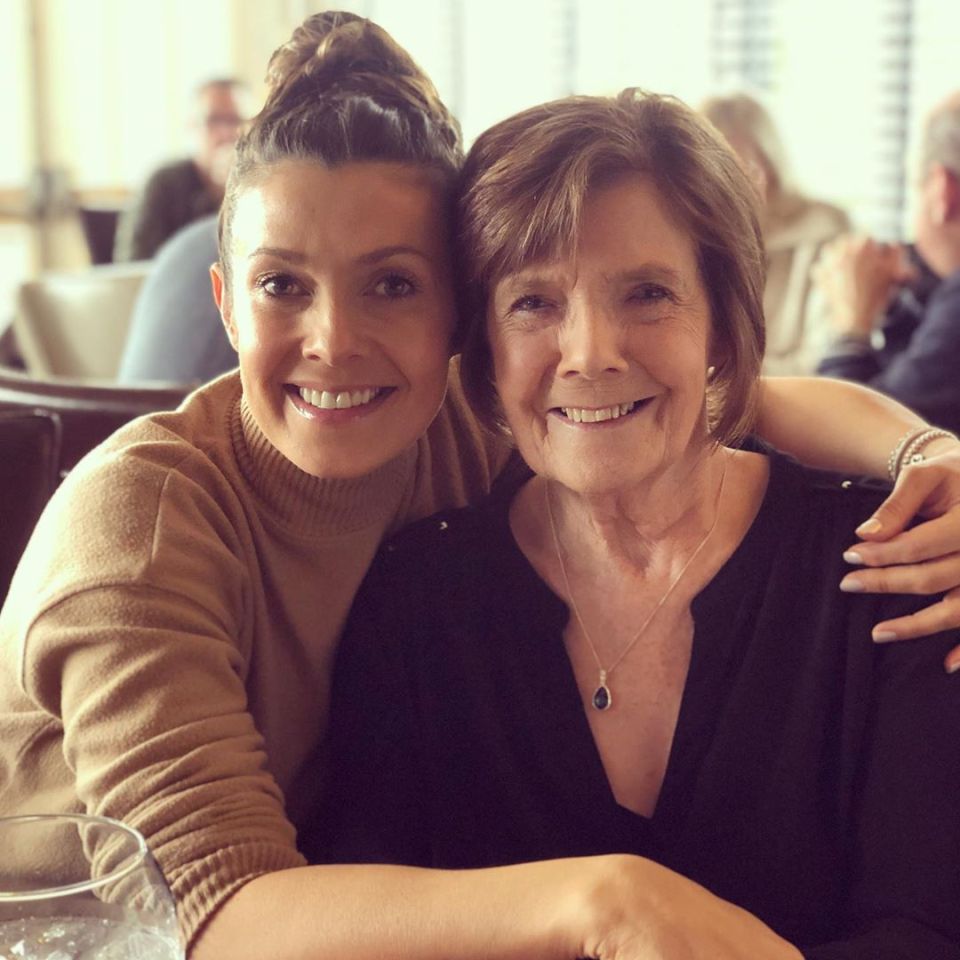 ACTRESS Kym Marsh’s dad Dave has got incurable prostate cancer after delaying a check-up due to the pandemic.

The ex-Corrie star, 45, is now urging men to seek help before it is too late.

Read our coronavirus live blog for the latest updates

Covid lockdowns have led to 50,000 fewer hospital referrals for treatment on the life-threatening condition.

Kym, who hosts BBC1 daytime hit Morning Live, told how her dad delayed getting checked, and has now been diagnosed with aggressive and advanced prostate cancer.

She said: “Speed is crucial — it can make all the difference. Prostate cancer is treatable, when it’s caught early.”

After months of putting off a check-up, fearing he was adding to the burden of an over-stretched NHS, 76-year-old Dave has been told his condition is incurable, causing anguish among his family.

Kym explained: “It has been a very difficult time, I can’t deny that, but we have always been very close as a family and so we have been able to talk together and plan for the future which is important.

“But the reality is that in Dad’s case it has now spread to his pelvis, spine, ribs and left leg, which is of course bad news.

“At this stage doctors are talking about it being incurable, but it is treatable and the hope is that they may be able to extend his life — but by how much, nobody really knows, and he is in discomfort.

“I think in his mind he has a target. He hasn’t really shared exactly what that is but he has done a lot of research himself — even though I told him not to — and he knows the statistics in terms of how long he might be able to fight this.”

Despite the heartbreaking news, father and daughter are desperate to turn their trauma into something positive.

They are urging other men who may be tempted to delay check-ups, perhaps fearful of contracting Covid at a clinic, to bite the bullet and seek expert advice.

Today, Morning Live will broadcast a film with Kym and her dad talking about his condition in a bid to encourage checks.

She added: “Obviously there’s no way of knowing for certain, and with cancer everything varies from one patient to the next and can be quite unpredictable, but there are some facts which we do know.

“One is that the earlier cancer is caught, the less likely it is to have spread — as it has in my dad’s case — and as a result, the more treatable it can be.

“The other is that over the last year amid lockdowns, there have been over 50,000 fewer men referred to hospital for prostate cancer treatment — and that is very ­worrying.

“The good news is that he has responded well to some of the hormone treatments he’s been given — but he’s still in a lot of pain, and that is very difficult to see.

“He’s now using a mobility scooter, which for him is the absolute worst part — he hates it. But it has allowed him to keep going out and about with my mum, who is still very active.”

Dave, married to Pauline, desperately hopes he will live long enough to walk his former Hear’Say star daughter down the aisle after she announced her engagement to boyfriend Scott Ratcliff last week.

Kym has been dating serving Army major Scott since 2018 and says she is “delighted” after he proposed as a birthday surprise.

For Dave, who overcame a previous prostate battle, the news has given him fresh impetus to keep fighting.

He explained: “My biggest hope is the treatment keeps working and gives me more time with my family. I want to be fit and well enough to walk Kym down the aisle after she recently got engaged.

Kym and Dave want to turn his trauma into something positive, so are urging others to get checked[/caption]

3million miss out on crucial testing

AROUND three million people missed out on cancer screenings last year because of the NHS’s emergency focus on Covid.

And the number of urgent cancer referrals made by GPs between March 2020 and January fell 16 per cent to 1.85 million.

Some 2,000 child cancer cases are suspected to have been missed.

The British Heart Foundation said there were people who had waited for cardiac treatment for two years.

Meanwhile, many Brits were too nervous to visit doctors during the heights of the pandemic, or feared wasting GPs’ time.

In total, 5.12 million Brits are now on waiting lists — with staff battling not only to get back to daily targets but to deal with the backlog.

Cancer services have begun to bounce back, with more than 200,000 people referred for checks in April following a record high the month before.

By May, operations and other elective activity had already climbed to 90 per cent of pre-pandemic levels, with 1.1 million people beginning treatment and 1.8 million diagnostic tests taking place in April.

However there have been warnings the backlog could take five years to clear.

“It’s something to look forward to, and making sure I’m there means the world to me.

“I’ve been very lucky because I have a wonderful family who support me, and that’s a huge help.”

Dave recalled his fateful decision to delay seeking treatment before being “stubbornly” dragged along to a doctor by his wife.

He added: “I’d had issues for a while and ignored them, to be honest. For quite a long time I’d had pains in my lower back, in my pelvis, and then, in the end, the longer I left it even driving was painful — it felt a bit like being sat on a golf ball all the time and I’d get out the car in pain.

Kym says early diagnosis can make all the difference[/caption]

“But you know what men are like, we can be stubborn. In the end my wife, Pauline, dragged me along to get it checked out — I didn’t want to cause a fuss, and the NHS have been very busy, of course.

“For a long time you just couldn’t get appointments.

“I want to make it clear, I don’t blame the NHS for my situation, not at all. The treatment has been wonderful and I’m very grateful, but obviously it has been a very difficult year or two for them.”

Looking to the future, he said: “Obviously my big hope is that other men like me will see this and not leave things too long.

Today, Morning Live will broadcast a segment on the family’s heartbreak[/caption]

“There will be a lot of other people out there now who have put things off longer than they should have done, and it’s important that everyone now thinks about the rest of their health and wellbeing too, because things only get worse.

“I’m starting on a new treatment next week, and hopefully it will work and give me a bit longer than I might otherwise have had.

“But the earlier you catch these things the better chance you have.

“While mine was quite far gone, other people might be able to catch things earlier if they act soon.” Kym’s family are extremely close.

With her BBC show moving to Manchester next year, she hopes to spend as much time as possible with her parents over the coming months.

But after Dave overcame previous health scares, the latest blindsided them.

Kym, who played Michelle Connor in Corrie, said: “The thing with cancer, of course, is it’s indiscriminate. It can impact any of us, it doesn’t matter.

“The NHS have had an awful lot on their plate the last 18 months and my dad knew that and so he put off going to the doctors as he didn’t want to be a burden. He never dreamed it could be as serious as it’s turned out to be for him.”

NHS is safe and ready

A CANCER diagnosis is a daunting time for patients and their loved ones, but particularly in a pandemic.

Despite the pressure on NHS staff due to Covid, cancer remained a priority and more than 325,000 people started treatment.

Some people had understandable concerns with seeking care over the last year.

Most recent data shows that in one month alone staff checked 230,000 people, including around 16,000 people for prostate cancer.

The good news is if it is caught early prostate cancer can be treated effectively so that people can continue to live healthy, happy lives.

David’s story will resonate with many families across the country and, by speaking out about his diagnosis, he will help us save lives.

Symptoms can range from needing to pee more frequently, difficulty starting to pee, passing blood or feeling your bladder hasn’t emptied fully. My message to you is: If you notice anything unusual, please contact your GP without delay, so that you can get the checks you need.

Our services are safe and ready to check and treat you.

And if you’re a male aged over 50, or have a family history of prostate cancer, find out more about knowing your risk on the NHS website.

The mother of four, who asked for a donation to Prostate Cancer UK to be made instead of a fee for this interview, added: “I’m only talking about this because he has asked me to — it was entirely his decision.

“He wants to use the platform I’ve got to try to encourage other men to get themselves tested soon.

“It’s vital people start to get their wider health checked out and looked after once again.

“We’ll never know if things would be different now for Dad if he had gone to get checked earlier. But we do know that the earlier these things are diagnosed, the chances of successful treatment increase enormously.

“That’s an indisputable fact. So please, if you’re worried, if you have any symptoms at all, it’s time to get checked.

“Statistically there are over 50,000 men out there, and that number is only increasing unless we encourage people to get the checks they need.”