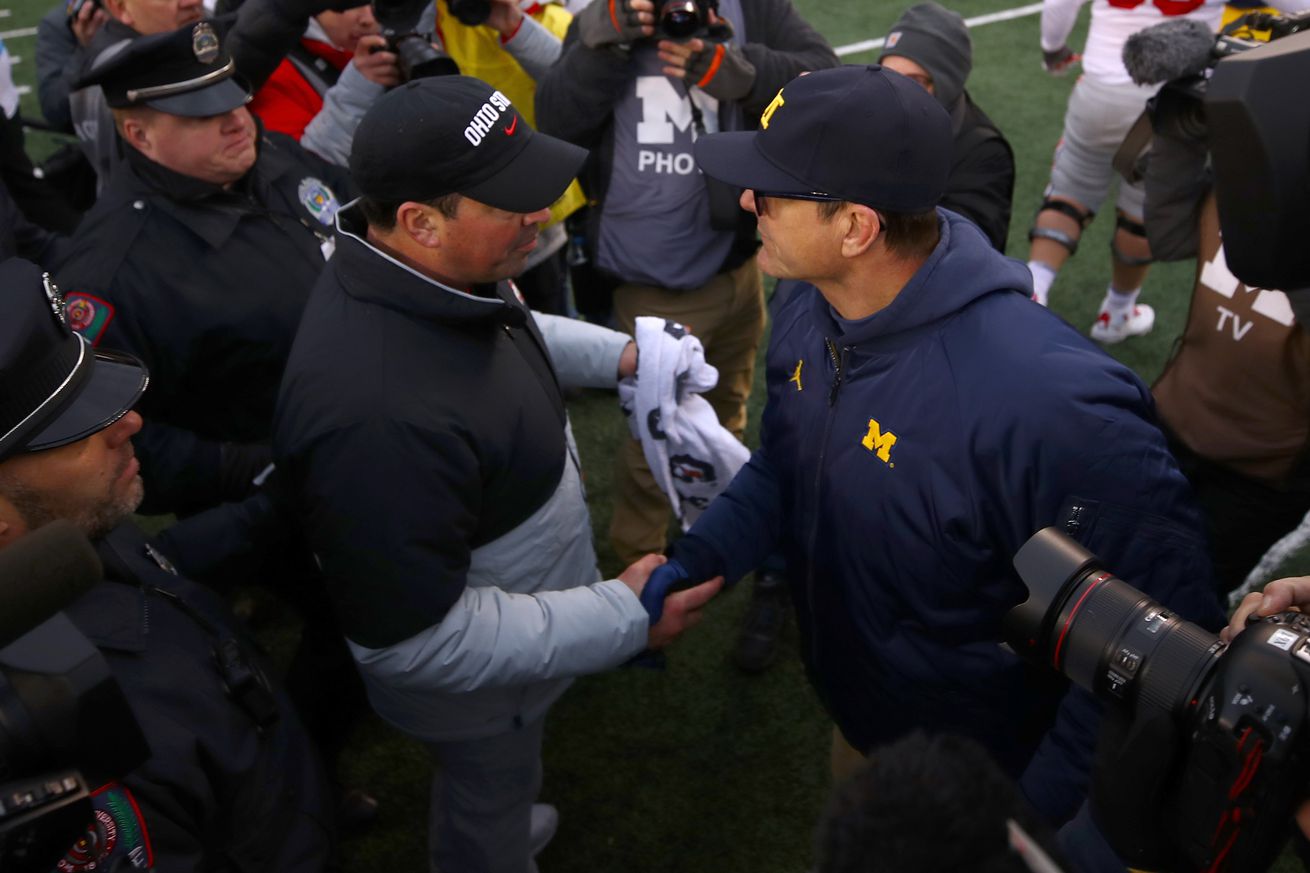 Could OSU and Michigan BOTH be in the College Football Playoff Top 4? Tuesday MACtion, CFP Rankings Open Thread

Grab your popcorn, grab your CFP Rankings outrage, and let’s talk the weird and dumb in college football.

This is absolutely beautiful. A fake sack of money as a turnover celebration trophy. Love it Eastern Michigan!! pic.twitter.com/mkkrukBxxS

Also, Thump and Green Akers talked all about it on the OTE Podcast:

The Huskies clinched the MAC West and will represent the division in Detroit.

I think we had fun last week in this article, talking about both the MAC and the latest stupid iteration of the very stupid College Football Playoff rankings, so we’re gonna run it back again.

As usual, there’s Big Ten basketball happening and a whole lotta Feast Week action. We recapped Day 1 and previewed Day 2, which is probably tipping off already, so here you go if that’s what you’re looking for:

Here’s another thread for your discussion/perusal of the night’s college football—both the MACtion and the rankings.

Here’s where it feels odd. Do you set up a 1-3 SEC Championship Game and a 2-4 matchup in the Big Ten this weekend—and would that imply Ohio State could still be in sniffing distance of the Top 4 even in the event of a close loss to Michigan? Do you make OSU-Michigan an official play-in game at 3-4? Does Cincinnati have to beat East Carolina by 100?

Here’s a place where you can talk about those things or, just in general, the sports of the week! We’ll keep this thread open and pinned as a place to talk about all things MACtion and college football for the next couple nights, and we’ll be sure to update with the CFP rankings as they become available.

Here are the MAC standings. Remember that the West is decided, but in the East we’ve got a play-in game this weekend!

I thought I had the Balls’ close game propensity figured out, and then they went and laid an egg at home. To even sniff a bowl they’ll need to take down a Buffalo squad that’s a lot better than 4-7 indicates. While I respect the hell outta Drew Plitt and the Robotbirds, I think eventually Buffalo has to stop shooting itself in the foot—and I wouldn’t put the propensity for MACtion too high in this one. Bulls, 27-21.

Vegas seems to have the in that the Huskies will rest their stars tonight—if you can call Rocky Lombardi a “star”, so it’s up to WMU to bring the fireworks here, fighting for bowl positioning within the MAC. Broncos, 33-27.

THIS ONE’S FOR THE MICHIGAN MAC TROPHY!

Having allegedly met some long-suffering Eastern Michigan fans before, I’m really rooting for them, though the Chips are just a damn solid team. You’re gonna see a heaping helping of Lew Nichols III (he’s at 1516 yards and 14 TDs), but the moment you fixate on him, QB Daniel Richardson can take the top off your defense with WRs like Kalil Pimpleton. Oh, and the Chips have a kicker in Marshall Meeder who’s 5/9 from 40-49 and 2⁄3 from 50+. Any chance Fitz could get him in the transfer portal? Goddamn.

At the same time, you gotta love the EMUs’ commitment to MACtion: all but one of their conference games (a 55-24 win over BGSU) have been one-score games. That seems...improbably, and yet that’s the beauty of MACtion. Ben Bryant is not the most efficient QB you’ll ever see, but you can’t help but root for WRs Hassan Beydoun and Dylan Drummond. Chris Creighton has kept this program afloat, somehow, and damn if lifting a Michigan MAC Trophy and winning a trip to the Bahamas or something wouldn’t be great.

Yeah, sure. This could have some dumb fireworks, it’s just up against too many other good games for me to care unless it’s something like 63-60.

I’m rubber, you’re glass. I don’t remember the childhood taunt, but I’m fairly sure the Zips are bad. Toledo, 45-10.

This one’s a straight-up “Watch That” rating even for Saturday morning, as that FLASH FAST offense should trouble the Redhawks’ defense...but let’s not pretend the Flashes are stopping Miami, either.

QB Dustin Crum and RB Marquez Cooper are a damn good zone read pairing, and RB2 Xavier Williams is just as good. Meanwhile, when Crum does throw it, he’s at a 13:2 TD:INT clip, with speedy threat Dante Cephas the most frequent target of his passes.

Meanwhile, Miami offers a more old-school approach under coach Chuck Martin, but damn if it’s not still effective. After taking the Gophers to the wire, Miami figured out what worked against Central Michigan (28-17), then have coasted through the rest of their MAC schedule, winning four of their last five—albeit against Akron, Ball State, Buffalo, and Bowling Green, none of whom are bowl-eligible. Kent will be a test for Brett Gabbert and his favorite WR Jack Sorenson.

The only problem here: the Fightin’ Bases struggled with teams that run the ball—see their 13-12 loss to EMU, 35-33 loss to Ohio, and 23-10 loss to Army. That loss to Ohio is telling—Crum’s a better QB than Rourke, and that could spell doom for Miami. Flashes, 35-28.

Here’s your open thread for the next two days’ games! We’ll update with tweets on the College Football Playoff rankings as they become available, so feel free to talk about those in the meantime, too.

While you’re here, as well, consider giving a click to our friends at Hustle Belt! They’ve previewed these games in a lot more depth than me, and they’re good guys and gals who deserve your support, too.

Thanks for patronizing OTE, as always. If you’re looking for the college basketball open thread, be sure to hit that up here. Usual gamethread rules apply, otherwise—behave, and Happy MACtion!

Could OSU and Michigan BOTH be in the College Football Playoff Top 4? Tuesday MACtion, CFP Rankings Open Thread