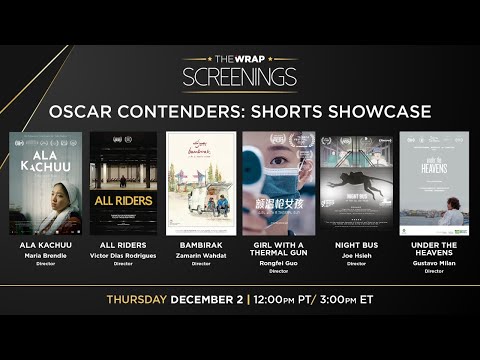 COVID, Bride Kidnapping and Venezuela Among the Subjects at TheWrap’s Shorts Showcase

Continuing the tradition of shining a spotlight on the year’s best short films, TheWrap’s Awards Screening Series is showcasing six live-action, animated and documentary shorts that have risen to the top of the festival circuit.

TheWrap awards reporter Joe McGovern spoke with the directors of these films and how they created their stories, which range from an animated Chinese horror tale to a feature on the struggle to make New York’s public transit system more accessible to physically disabled residents.

Joe Hsieh brings us “Night Bus,” a story of a late-night commuter bus trip that goes awry over a suspected theft and an accidental collision with a monkey, leading to a chain reaction of distrust and violence.

Another Chinese entry in the showcase is Rongfei Guo’s “Girl With A Thermal Gun,” which was selected for this year’s Tribeca Film Festival and is part of the new global wave of tales set during the COVID-19 pandemic. The tongue-in-cheek romance in the era of essential workers tells the story of a grocery delivery man who has fantasies of falling in love with a supermarket employee who checks the temperature of shoppers before they enter.

Swiss filmmaker Maria Brendle brings us “Ala Kachuu,” a short film set in Kyrgyzstan and confronts the scourge of bride kidnapping, an outlawed but still rampant practice in the country where women are kidnapped and forcibly married to men in rural areas. The short film follows a 19-year-old with dreams of attending a university who is abducted off the streets of Bishkek and coerced into spending the remainder of her life in the wilderness as a married woman.

A pair of live-action shorts tell tales of refugees in different parts of the world. Zamarin Wahdat, who worked as a camera operator on the Oscar-winning short doc “Learning to Skateboard in a Warzone (If You’re a Girl),” has moved into directing live-action shorts with “Bambirak,” a story about an Afghan refugee living in Germany who tries to balance his work with being a father when his frightened daughter stows away in his van on his way to his job.

And from South America, Gustavo Milan brings us “Under the Heavens,” a story of a young mother escaping the collapsed economy of Venezuela to find a new life in Brazil and whose fate becomes entwined with a young couple with a baby girl whose mother cannot breastfeed.

Finally, Victor Dias Rodrigues brings the short doc “All Riders,” which recounts the ongoing, years-long struggle by disabled activists in New York City to get the MTA to make the city’s subway stations more accessible, whether it is fixing long-broken elevators or adding more ramps to stations.

See the directors of all six films talk about their inspirations and filmmaking processes behind their stories in the clip above.

COVID, Bride Kidnapping and Venezuela Among the Subjects at TheWrap’s Shorts Showcase