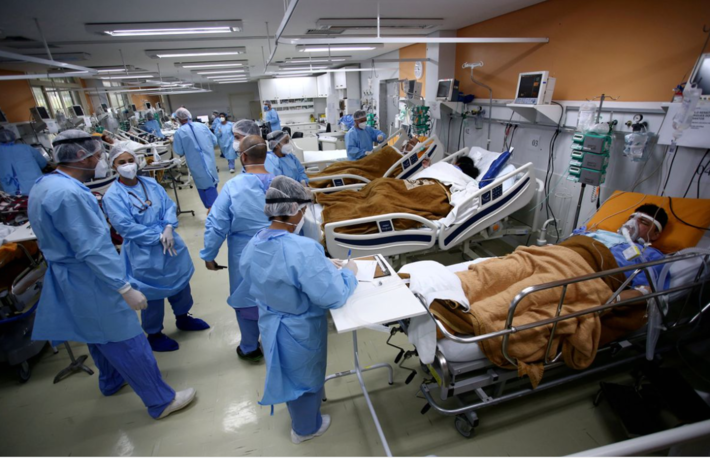 Covid: Predictions for the Next Ten Years

I am not a medical doctor, only a doctor in statistical sciences. Yet much of the political crisis has its origin rooted in data and statistical models: people who disagree, on either side, do so mostly because they disagree with the conclusions based on the opponent's data (accused of cherry-picking), or the validity of the data in question. In short, this crisis epitomizes what is called "lying with statistics" by people ranging from layman to scientific expert. Some of the lies are due to ignorance, innumeracy or lack of analytical acumen, some are made on purpose or because being pressured by a third-party that wants to enforce its agenda.

I won't discuss the data here, but rather, what is missing in the data, and the potential implications. In short, I focus on the absent data (so massive it dwarfs the observed, recorded data). My predictions should be taken as personal opinions only. In fact, they are mostly associated to unanswered questions and unobserved data; I would describe these predictions as an attempt at good judgment, in the absence of solid data. I also  explain why a 85% vaccination rate is unachievable in the long-term in US, and why the outlook, nevertheless, is probably promising. Section 1 discusses my predictions. Section 2 discusses common reasons - not mentioned in the media whether left or right - why some people are not vaccinated. I believe that vaccines work, so by listing the reasons in question, it does not mean that I endorse them.

A potential way to get some insights about the future is to look at the Spanish flu. Is the common flu a descendant or relative of the Spanish flu, that mutated over time and is constantly mutating and mixing with other related viruses? I don't have an answer. Similarly, one might think that Covid, after killing everyone it could, will have a much harder time to be so lethal. Also, a smart virus does not want to kill too many people. In that regard, one could argue that Covid is smarter than Ebola. A smart virus would want to infect a large number of people who will be asymptomatic and will spread the disease unknowingly. The fact that the virus kills many people in the process is probably not a feature in the design of the virus, created for that purpose, but rather a side-effect due to poor design. It does not help the virus as the target population also adapts and will find ways to evade it (vaccines, for instance).

Coming back to the Spanish flu, one could argue that the current Covid will evolve in similar ways and become much less lethal sooner rather than later, like in the next few months. In part because many people are vaccinated, and among those unvaccinated, many have been infected once if not twice. Among those unvaccinated but previously infected, many will experience only mild episodes in the future and will get an immunity similar to those who are vaccinated. For instance, many people got the flu a few times as a kid, and never caught it again in the next 40 years. Maybe they caught it again, maybe even every year, but were unaware as it produced no symptom. How many people are in that category, I don't know. It would be interesting to do a survey to find out. My guess is that it is more than 50% of the population. Since these people never go to a doctor to get tested for flu, they are not in the statistics. Hospitals never see these people, maybe a reason why some doctors believe that they don't exist. But I believe this is a reason why it is impossible to reach a 85% vaccination rate on a long-term basis.

Also, another important question: how much these people contribute to the spread of the flu, compared to vaccinated people, and to people who get very sick? Finally, not catching the flu for 40 years in a row does not mean that you are immune for life: as you get older, your immunity system gets weaker, and many really old people eventually die from the flu (technically from old age, but it was the flu that was the last straw for them), even if they were untouched for 70 years. And some seasons are particularly deadly. To summarize, Covid will never disappear entirely, in my opinion. Some years will see a deadly variant. Vaccinated people will probably have to get a shot, or two, every year. It may end up like the flu. Maybe not as bad, or maybe worse on average.

Another type of prediction is about how the governments will react. Will vaccine become mandatory for all? I don't think so. Will you for ever have to show proof of vaccination to go to a restaurant? I don't think so, indeed I think it won't be the case anymore within a year. Will vaccinated people get privileges over non-vaccinated, in the long-term? Probably. But  in order to keep these privileges, they will most likely have to get a booster shot, at least once a year. Now my predictions about government mandates have been overly optimistic in the past (I never imagined governments would enact such tough mandates for so long, and I tend to be a pessimistic person). So you might want to take this with a grain of salt. It is possible that lockdowns and tough mandates will happen again on deadly years, in some locales. It is even possible that a 85% vaccination rate can be achieved in the short-term with very tough mandates, but as people become complacent or forget about it over time, some suffering enough from the vaccine not to want booster shots, some like healthy kids thinking Covid is worse than vaccine for them (from a risk management point of view), and because numerous recovered people will realize they are not getting sick anymore (like people who never get the flu again), the effective vaccination rate will drop sharply in the future (you can't count someone vaccinated 5 years ago as being vaccinated, for a disease like Covid). Nevertheless, Covid will become much less lethal for the reasons previously discussed. Good vaccines not involving needles will  probably be developed, and I think it will increase vaccination rates.

2. Why so many people are still unvaccinated?

One in about 500 people has died from Covid so far, in US. This is a huge number compared to one in 5,000 who die in a car crash in a 2-year time period, but if your circle of friends consists of 100 people, there is only a 20% chance that you know someone who died from Covid. However, Covid is not a random killer, and trying to put everyone in the same bucket, for policy purposes, creates problems. We are all unequal against Covid, and Covid is unfair and a discriminatory virus. Some people have several relatives who died from it (especially if you have frail people in your circle), and some have none. It is clustered, not random. A bit random, but not that much, and certainly far less random than a lottery. Some people know that their risk is very low (see the numerous people who never get flu 40 years in a row). And some people erroneously think they are stronger than others. This has some indirect impacts on the decision to vaccinate.

That said, let us focus on the unvaccinated people that are not in one of the above categories. A priori, it excludes all the so-called "idiots", and only includes people who believe that vaccines work and are very safe. It would be important to estimate what proportion of the population (among the unvaccinated) they represent. Below, I am listing some of the arguments that I hear from them, which are never mentioned in media outlets. It does not mean that I endorse these arguments: I am just simply reporting them. I believe that this is the hidden face of the unvaccinated, because despite (in my opinion) representing the majority of the unvaccinated, no one ever mentions them.

Again, this is not an endorsement of these viewpoints. Some of these people will eventually become very sick or die, and infect others. But vaccine itself does not fully protect either against transmitting the virus. It is said that it works better than catching the disease (assuming you don't die from the disease) in terms of building immunity and stopping the spread. But the statistics are biased in the sense that the average recovered patient got her last infection months before the average vaccinated person got her last shot. Over time, we will see if natural immunity is stronger or not than that provided by the vaccine. It seems that volatility due to recovering is higher, thus predictability more difficult, than from vaccines, in terms of assessing the acquired immunity for a specific individual. My guess is that natural immunity works better than vaccines for some people, and worse for other people. In both cases, you'll probably have to be infected/exposed again, or better, vaccinated again, to keep up with the new variants of Covid. But recovered people are going to be the biggest challenge for government policies, for years to come. Just my 2 cents.

About the author:  Vincent Granville is a data science pioneer, mathematician, book author (Wiley), patent owner, former post-doc at Cambridge University, former VC-funded executive, with 20+ years of corporate experience including CNET, NBC, Visa, Wells Fargo, Microsoft, eBay. Vincent is also self-publisher at DataShaping.com, and founded and co-founded a few start-ups, including one with a successful exit (Data Science Central acquired by Tech Target). You can access Vincent's articles and books, here. A selection of the most recent ones can be found on vgranville.com.

Covid: Predictions for the Next Ten Years