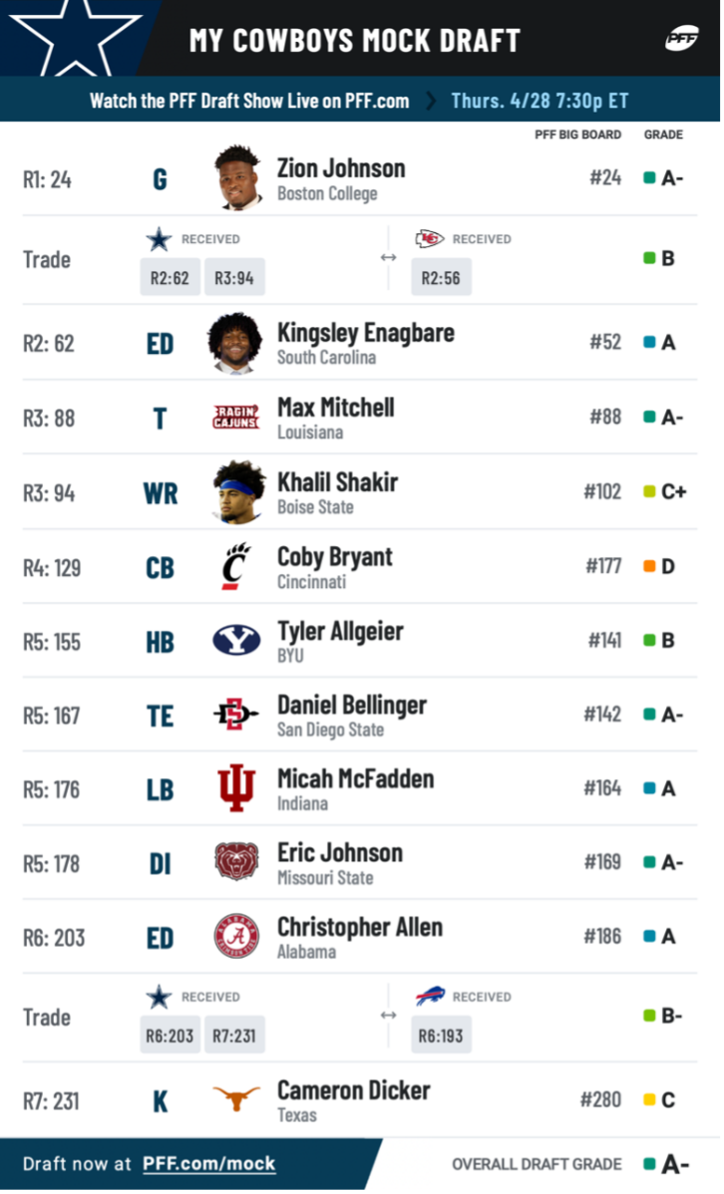 In one sense, this offseason has been one of the most quintessentially Cowboys offseasons ever. It’s been a callback to the vintage cocaine and stripper vibes of the early ’90s and the fatal-drunk-driving-accident ethos of the 2010s all rolled into one. If your bingo card contained a longtime front office executive resigning in shame for peeping on undressing cheerleaders, the sudden appearance of a 25-year-old Jerry Jones fun baby, and the harboring of an accessory to murder in your secondary, smash that dauber down and shout it out loud! (Thank goodness NDA settlements don’t count against the salary cap.)

Sadly, when it comes to the football side of things, the past several months have been decidedly un-Cowboys. Usually, despite its dysfunction, this front office has shown a surprising ability to retain key contributors and to plug holes through crafty bargain-hunting in free agency, allowing them to approach the draft the right way: by taking the best available player as opposed to potentially reaching to address positions of need. And, as a result, they’ve been one of the better drafting teams in the NFL over the last seven or eight years.

But it seems Jerruh and the Joneses have been too busy this year covering up the ceaseless torrent of shameful behavior in their ranks and signing licensing deals with cryptocurrency websites (“Blockchain Com”?) to pay much attention to roster building of late. Drug test-cheater La’el Collins and human holding penalty Connor Williams were both put out to pasture, leaving gaping holes in the O-line. One of the league’s best wide receivers in Amari Cooper was flipped for a roll of ankle tape, and their big in-house signing in Michael Gallup likely won’t play until Week 4 as he’s recovering from a torn ACL. They let a seven-year investment in Randy Gregory disappear into the thin (smoky) Colorado air and forced special teams coach John “Bones” Fassel at gunpoint to let Greg Zurlein walk free to sign with the Jets. With last year’s annual second-round red-flag player selection Kelvin Joseph, née Bossman Fat, potentially facing disciplinary action from the league for his involvement in a literal murder, the cornerback room could be thinner than expected as well. The Dallas Cowboys are currently in more need of personnel than the post-Great Resignation service industry.

Perhaps the argentate wainscotting is that there are so many holes, no matter which position they might take, it’ll no doubt be one they could use. Thankfully, though the draft is light at sure-fire, can’t-miss prospects at the top, the talent stretches deep into every round. Players who can help should be able to be found with each and every pick. Let’s see what guidance our big football brain-sporting analysts can provide the catastrophe-distracted Joneses.

For Round 1 tonight, replacing two starters along the offensive line is going to be difficult, but that should be a top priority. It’s good fortune that guards like A&M’s Kenyon Green and Boston College’s Zion Johnson should be available when the Cowboys pick at 24. One of these guys is Dallas’ pick. That’s also in the range of where their value dictates they should go, so avoiding the dreaded reach is possible.

Other options are pass rusher, a high-value position you can’t ever have enough of. Could be that Purdue edge George Karlaftis is available, or, projecting a little, Arnold Ebiketie from Penn State (the school that honed Micah Parsons into the second coming of Lawrence Taylor) could be a sleeper who allows us to quickly forget about losing Randy Gregory.

The other biggest need is at pass catcher. My favorite at the position, Drake London, and a pair of Ohio State wide receivers, Garrett Wilson and Chris Olave, are all likely gone, but if one of them slips, I would do cartwheels all the way to turning in the card for them, even over either of the guards. Either George Pickens or Treylon Burks would be a pretty decent consolation if pre-draft predictions prevail and London, Olave and Wilson are off the board.

It’s possible the Cowboys could trade down a few slots and still have their pick of one or two of the above while picking up a third– or fourth–rounder to help fill other needs. Kansas City at 29 is a potential dance partner that wouldn’t tank the Cowboys’ chances at getting one of their coveted step-in starters.

On Day 2, Rounds 2-3 should net starting-caliber players as well. Depending on where Dallas decides to go in the first, options at the positions not taken should be in plentiful supply. Receivers Skyy Moore and Jalen Tolbert could hang around, defensive ends Drake Jackson or Josh Paschal could be on the board, or O-linemen Trevor Penning from Northern Iowa and Washington State’s Abraham Lucas could be options in the second.

Alternatively, Central Michigan’s Luke Goedeke or Wake Forest tackle Zach Tom could develop into potential Tyron Smith replacements in the third, while NDSU’s Christian Watson or UCLA’s Kyle Philips are receivers in that same range. Tight End is also a sneaky need with Blake Jarwin’s porcelain body and Dalton Schultz set to require his own Brinks truck next year. Washington’s Cade Otton and Virginia’s Jelani Woods were both “30 visits,” so they are on the Cowboys’ radar at the position.

Fourth-round selections should be at least rotational contributors next season and potential replacements for aging starters in future years. I’d personally like to see a running back’s card turned in. Zeke has tons of miles on his tires, and Tony Pollard will likely play his last season in Dallas in 2022. There’s a Derrick Henry starter kit in fellow former Crimson Tide running back Brian Robinson Jr. that would recall the dumptruck-comin’-atcha days of Marion the Barbarian, and BYU’s Tyler Allgeier projects to be a shifty complete back as well. Martin Emerson from Dak Prescott’s alma mater, Mississippi State, might last until Pick 129 as an option at corner, while Arizona State’s Dohnovan West could push Tyler Biadasz for starting center duties.

Rounds 5-7 are for taking players based on traits and projections. There should be plenty of quality left to pick through in these later rounds. Linebacker Micah McFadden from Indiana is intriguing (and imagine how cool it would be to have two Micahs on the defensive front!). Tennessee’s Matthew Butler, LSU’s Neil Farrell Jr., or Missouri State’s Eric Johnson could add some more beef to the defensive interior. North Carolina’s Joshua Ezeudu or Virginia Tech’s Lecitus Smith are in these rounds and could compete as Connor Williams replacements.

One thing I will be performing blood rituals to will into existence is the drafting of a kicker on Saturday. Either LSU’s Cade York or Texas’ Cameron Dicker “The Kicker” would be worth a selection if only to stave off undrafted free agency bidding wars. The Cowboys have four fifth-round selections (if they don’t package a few of them to move up at some point), so surely they can spare one on a kicker who won’t miss extra points and is better than a coin flip between 35 and 45 yards. It makes too much sense. Which is exactly why they won’t do it.

The Germans have a word, sehnsucht, which roughly translates to “illness of the painful whim.” That’s kind of how I feel the Cowboys are handling the draft. For all the ballyhoo and five-star reviews showered on the front office for its drafting success, it sure feels like the brass plans to use the coming draft weekend to plug roster holes instead of picking the best available player.

With glaring needs at interior offensive line, wide receiver, defensive end, tight end, and so many more, this team is probably feeling serious weltschmerz — “pain of the world.”

The draft cognoscenti has zeroed in on a few prospects the team could grab at pick No. 24. Though no one outside the league really knows what to expect, O-line, wide-out, and edge rusher seem to be the positions the team will most likely address early on.

Most experts believe one of the two elite guards will still be available by the time the Cowboys are on the clock tonight. Boston College’s Zion Johnson should be a layup pick. If he’s there, don’t get fancy. Just put him on your team and enjoy not having to worry about that position for the next five seasons. Alas, Johnson might be gone.

Aggie lineman Kenyon Green would be a nice consolation prize. He’s another plug-and-play guy who boasts elite athleticism. Northern Iowa’s Trevor Penning could eventually move to tackle if the Terrence Steele experience fails or Tyron Smith finally atomizes and swirls away in a stiff wind.

Rumor has it that the brass might be willing to trade up for Mississippi State tackle Charles Cross — the heir apparent to Tyron — but I neither want that nor trust the front office not to get hoodwinked in the deal. The last time Jerry Jones and company moved up in the first round, Cowboys’ fans got to watch Mo Claiborne alternately underwhelm and break like so much bone China.

There aren’t many edge guys I’d like to see the team take at 24 over the hogs, but should someone like Florida State’s Jermaine Johnson II or Georgia’s Travon Walker tumble down the boards, they should don the star. Both are freak athletes but raw. Purdue’s George Karlaftis is less raw but also less freaky. I’d still take him on my team.

The receiver pool is deep this year, though it lacks a top-line Calvin Johnson type. There are a few interesting dudes who could reasonably still be looking for a home at 24. Arkansas’ Treylon Burks is a beginner Deebo Samuel. Imagine a snowplow running a 4.5 40-time, and you’ll get an idea of why he was so hard to tackle. USC’s Drake London was having a spectacular year until his mid-season injury, which might be severe enough to give pause to the other teams picking ahead of Dallas. Ohio State’s Chris Olave is a faster Michael Gallup. He wins with precise routes and breakaway speed, but don’t expect many corner-of-the-end-zone jump balls in his future.

On Days 2 and 3, expect Dallas to address tight end and edge — assuming one of the first-round ends doesn’t fall. Traditionally, the team picks from the pool of 30 players they are allowed to visit during the pre-draft process, so we’ll use that list as a guidepost.

For Day 2 edge players, look to hear the names of Houston’s Logan Hall, A&M’s Demarvin Leal, Cincinnati’s Myjai Sanders, or Mississippi’s Sam Williams. The team is reportedly interested in A&M’s Michael Clemmons and UAB’s Alex Wright, both D-ends, but those players would likely be Day 3 picks.

I have a strong feeling the front office is going to invest a high pick on a tight end, despite just slapping the franchise tag on Dalton Schultz. Coastal Carolina’s Isaiah Likely and UCLA’s Greg Dulcich are both on the list of 30 and won’t be around for the draft’s third day. Jelani Woods might be. The Virginia product broke out this year but lacks the polish of some of the others. Iowa State’s Charlie Kolar and Washington’s Cade Otton are stellar athletes who can’t block.

Stephen Jones — one of Jerry’s legitimate children — has insisted on sports talk radio that the team will pick the best available players, using Micah Parsons and Ceedee Lamb as recent supporting evidence. This iteration of the team isn’t nearly as (allegedly) deep as it’s been over the past couple of seasons.

My hope is that the front office doesn’t outsmart itself and try to draft “project players” or pass on a stud because of his position. The team isn’t as talented as it was last season, and they need guys who can come in and play snaps. If they don’t nail this draft, look for the Joneses to feel serious torschlusspanik — “fear of a closed door.”

The post Cowboys Draft-stravaganza 2022 appeared first on Fort Worth Weekly.