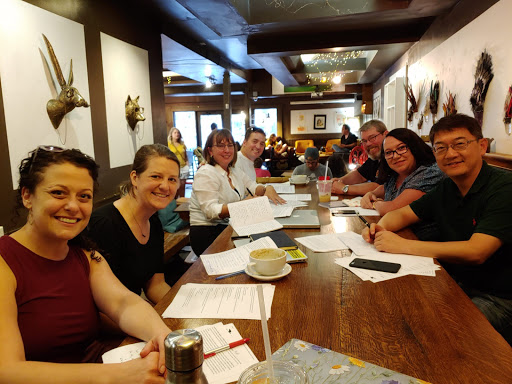 In this second of our series of workshops, we explore seeing things an a brand new way. Try out these writing prompts and worksheets, all designed to kick start your creativity and develop "flow."  As an added benefit, you will find that creative writing strategies are highly effective in developing new ideas for scientific, technical, and business problem-solving.

Pattern Recognition:
Creative writing is a lot like machine learning. The raw data is processed multiple times until patterns form, and those patterns can be assumed to have meaning. The intriguing part of poetry (and all literature) is the interpretive process in which the reader finds patterns and suggests meaning even if / when the author was not conscious of generating them. At the same time, part of the author’s craft involves creating patterns through recurring juxtapositions and repetitions.

Generate 15 random words. You may use randomwordgenerator.com

Then, look at the 15 random words that you have generated.  Can you make any sense of them?
Arrange the words, then add 15 more words (of your own choice or also randomly generated), but place the new words in a places that make sense.

Examples:
“The Idea of Order at Key West” by Wallace Stevens

How can I use this technique for my work?
Sometimes your message gets lost because you have too many words, especially in the case of proposals, resumes, and web presence. To help you focus on what really matters, select 15 key words. Then, work with them and make them really convey your message.  Remember that less is more. You may wish to let the words stand alone as bullet points that link to pages that have more details.

Repetition:
“There is no meaning without repetition.” – J. Hillis Miller.

The repetition can be something that approaches an incantation (as in the case of Poe’s “The Raven”) or can be a color, symbol, or set of images or characters. For example, a series of characters may appear at different times, and each is a trickster figure.

Try it out! Write a narrative and deliberately incorporate repetitions, then see how each repetition starts to affect that way that one reads and interprets the work.

Examples:
“The Yellow Wallpaper” by Charlotte Perkins Gilman
The Crying of Lot 49 by Thomas Pynchon
White Noise by Don Delillo

How can I use this technique for my work?
As you write a report, design a report, or create marketing materials, keep in mind the following:

1. Engage your reader / audience quickly with the main idea

2. Make sure your topic sentences in your body paragraphs or pages connect to the main idea

3.  Repeat the main idea, but with each repetition, add a facet to it. (For example, the main idea can be “a great deal”, and then you can elaborate with separate pages / paragraphs on price, efficiency, return on investment, experienced team, track record, etc.)


Minimalist Experiments: Juxtapositions
In the first part of the 20th century, minimalists (influenced by the Futurist Manifesto by Marinetti and others), “outlawed” most poetic devices. They preferred “found art” – the equivalent of the “objets trouvees” somehow bundled together.

The same works for poetry: find everyday words and phrases, and then place them in ways that they suddenly “pop” and reveal something unexpected. In the 1980s, the “Language Poets” took the earlier minimalist fashionings of William Carlos Williams, the Dadaists, and Futurists to unfasten language from its denotative moorings.

Try it out! Select two or three words or concepts and then write a work that includes them several times. Here are a few:  QuikTrip, OXXO, feral cat, ginger smoothie

How can I use this technique for my work?
Think of how you can put “found objects” together to create something completely new. Here’s “Debris Collage” by Swiss artist Jean Tinguely, in which the title in French "Débricollage" contains a nice play on the words "debris," "collage," and "bricolage"


The goal is to juxtapose or bring together seemingly unrelated ideas or concepts in order to create something completely new, and to encourage people to see things from different perspectives.
So, be sure to keep your copy spare, use lots of white space, and incorporate useful and thought-provoking images that make your readers want to ask questions.

(check out The Adventures of Tinguely Querer )

Conspiracy, Urban Legend, or a Hidden Truth?
"There is a necessary relation between the fictions by which we order our world and the increasing complexity of what we take to be the 'real' history of that world." Frank Kermode, The Sense of an Ending.

We quell our existential anxiety by means of telling stories, or at least putting a nice, neat beginning, middle, and end on it. Aristotle wrote in Poetics that plots must have a beginning, middle, and end, something that was echoed by the Roman, Horace, who took Aristotle’s ideas even further and insisted on the “unities” of harmony, proportion, and narrative structure.

These highly ordered ideas were revived at a time when the French were making order from chaos with Louis XIV, the Sun King. Nicolas Boileau’s  L’Art Poétique (1674) was a tremendous influence on poetry and drama in both France and England and effectively ushered in Neoclassicism in literature.

The 20th century largely abandoned the early structures, and yet the mind still seeks the “unities,” to the point that the mind will impose them even when they are left unstated or jumbled.  Some authors deliberately leave out parts, and they let the reader fill in the gaps.

Write a quick story that explains something very odd about the town you are living in now, or in which you lived earlier.

How can I use this technique for my work?
Keep in mind that our minds are structured to crave stories, and that is why a compelling story (even if a complete urban legend or conspiracy theory) will appeal to people more than simply a list of facts or statistics, even though technical details are important as evidence to back up your story.

So, include a story in your presentation.

1. Include a story – make it interesting and engaging. Think of your audience as you create the title of your story. “We beat the odds.. “ “The t-shirt that saved a thousand cats, dogs, and parrots.”

2.  Analyze your audience. What are they going to expect, and what are their competing narratives? If you’re dealing with a controversial topic,  you can expect that your audience will have a countering story which they will potentially consider to be the ultimate authority (not yours). So, be sure to refer or accommodate their story. 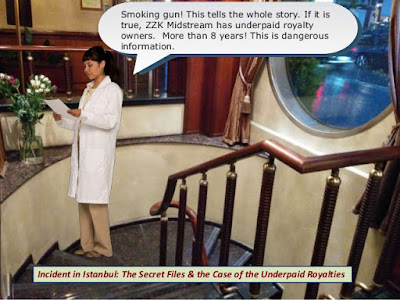