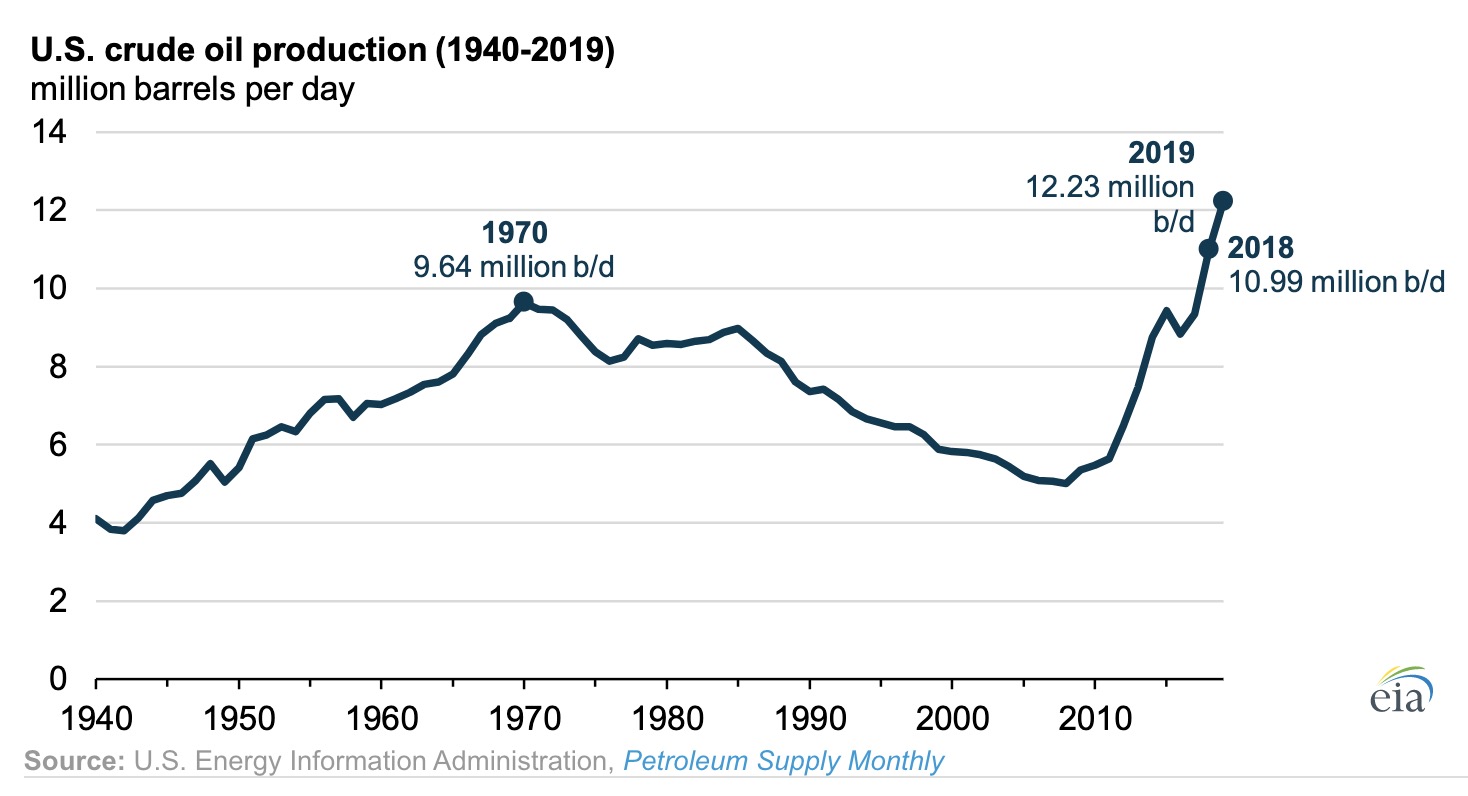 A single graph of U.S. crude oil production suffices to show the sheer magnitude and beauty of the shale revolution, which has given us energy dominance.

It is stunning. When you look at a graph depicting crude oil production in these United States and, unlike the vacuous AOC, you’re old enough to remember our gas lines, the odd and even days, our captivity at the hands of Arabian oil states and all that, you are just shocked to see what the shale revolution has done for. It looks impossible in retrospect and, yet, it has happened. We have, to use the silly terminology of the Obama era, not only “bent the curve” upward but have turned it upside down.

See what I mean? Here are the facts from the Energy Information Administration (emphasis added):

That’s “fracking”—the “shale revolution”—for those of your living in Manhattan, and here’s more:

Texas continues to produce more crude oil than any other state or region of the United States, accounting for 41% of the national total in 2019. Texas crude oil production averaged 5.07 million b/d in 2019 and reached a monthly record of 5.35 million b/d in December 2019. Texas’s production increase of almost 660,000 b/d in 2019—driven by significant growth within the Permian region in western Texas—was 53% of the total U.S. increase for the year. Texas crude oil production has grown by 3.9 million b/d, or 333%, since 2010.

Several other U.S. states or regions set production records in 2019. In addition to contributing to Texas’s record production year, the Permian region drove a 248,000 b/d, or 36%, crude oil production increase in New Mexico. This increase was the second-largest state-level growth in 2019 and accounted for 20% of the total U.S. increase. In 2019, New Mexico set a new oil production record for the third consecutive year, growing by 749,000 b/d since 2010.

In its latest Short-Term Energy Outlook, EIA forecasts U.S. crude oil production will continue to increase in 2020 to an average of 13.2 million b/d and to 13.6 million b/d in 2021. Most of the expected production growth will occur in the Permian region of Texas and New Mexico.

Don’t you love it? Sadly Alaska has been held back by decades of Federal incompetence and slavish refusal to offend environmental extremists. The same applies to theState of California, once a free country but now an empire of environmental exactitude.