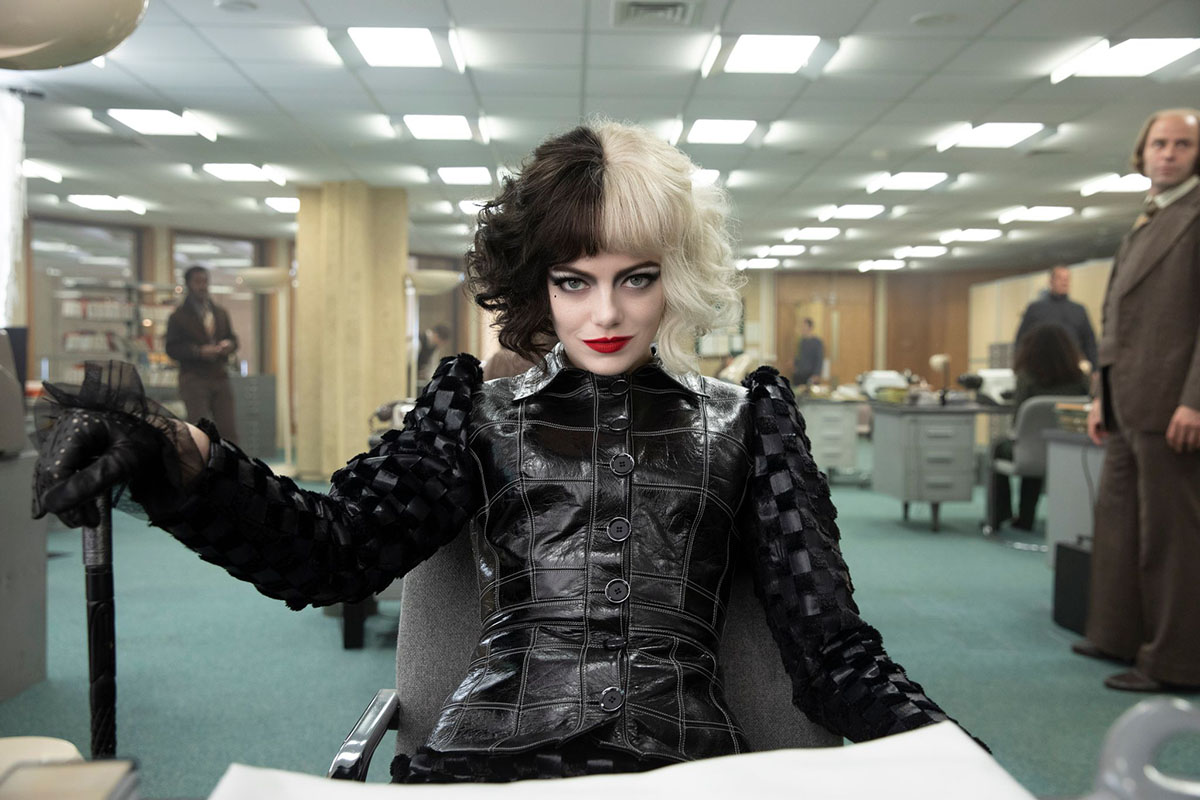 I just came home from watching “Cruella,” Disney’s new origin film about Cruella De Vil, the infamous villain of “101 Dalmatians.” I had pretty low expectations for it, to be honest; I figured this would just be another cash grab with little story to show for it.

I have never been happier to be wrong.

This movie is a glam-rock explosion for the senses: color, light, music, fashion and makeup straight out of 1970’s London. Watching Emma Stone (as the titular character) and the sublime Emma Thompson (who plays her nemesis, the Baroness) go tete-a-tete is delicious, and the easter egg throwbacks to the original “101” are a pleasure for Disney freaks like me.

But what I loved most about this film was Cruella herself.

In the beginning, we meet young Estella, whom, we’re told, “sees the world differently.” In an effort to help her fit in, her well-intentioned mother encourages her to cover her black-and-white hair with a hat and stay out of trouble. But trouble is irresistible to Estella, especially when bullies choose her as her target (interestingly, she’s the only one who is ever punished, even when she’s hit with a spitball or goaded into a fistfight). Throughout the film, Estella is pulled between her “good” side and her vindictive, sinfully glamorous alter-ego, Cruella. Ultimately, she must sacrifice one side for the other to become her true self.

I bet you can guess which one she picks.

Ziggy Stardust wardrobe aside, Cruella’s story reminded me of my own. Though I may not have a manic desire for revenge, I also saw the world differently and, as a result, struggled to find my place in it. “Round pegs fit in round holes,” my mother used to say. “But Rea is shaped like a star.”

To her credit, my mom, a powerhouse of confidence and competence, always encouraged me to be who I was. But, as someone who was struggling with social anxiety and food addiction, that was the last thing I wanted to be. So, I tried to be more like her. Through that invisible transmission between mothers and daughters, my perspective of the world — as well as my opinions and preferences — shaped by hers. I built a “big” personality, quick with jokes, anecdotes, and an extra-loud laugh, to perform alongside hers. I envisioned myself growing into a balabusta like her, making gorgeous challahs and a multi-course Shabbat meal to entertain a full table of guests every week. She was a real doer, capable of everything — in my eyes, at least — so I let my mother handle all the challenges that I didn’t believe I could manage on my own.

But when I was 27, my mother died of cancer. By then, I was married with a baby and had come into my own, somewhat, but there was something about not having her as my safety net anymore that thrust me into a whole new way of being. Without her to lean on (or compare myself to), I had only myself. I had to learn to trust my own instincts as a mom, as a wife, as a professional, as a human. I had to learn to do many, many hard things on my own — advocating for children who didn’t fit the mold, either; buying a home; navigating a career; balancing all the things a mother does while still caring for herself. It was extremely challenging, but the payoff was massive: I discovered that I could do hard things on my own. Losing my mother was devastating and I would give anything to have her back today. But I do believe that there is a blessing in even the darkest things. By being forced to face life by myself, I transformed into someone I respect: my true self.

I relate to these challenges as a mom as well. Now that I’m a parent of five children, who range in age from 7 to 19, I’m realizing how one of the hardest things in the world is to give my children the freedom and dignity to put themselves out there and risk being hurt. The temptation is so strong to give advice, suggest a change, or even speak for them to make sure they’re understood. But my own experience has shown that I’m doing them no favors by trying to sculpt them into social acceptability; the cost is their authenticity and self-respect. My job is to acknowledge my fear, let it go with a prayer, and lead the way by embracing what makes me different.

Perhaps I’m giving the writers of this film too much credit, but I saw “Cruella” as a campy meditation on self-actualization and the relationship between mothers and daughters. Estella/Cruella struggled to find herself partly because her mother encouraged her to tamp down her true self in order to be accepted. In the movie, when Estella follows her mother’s advice to be kind, patient and courteous, she doesn’t get the respect or the recognition she deserves.

Of course, when she becomes Cruella, she faces serious opposition from the Baroness, the queen of fashion’s old guard, who resents and envies Cruella’s vision of the future. It is only by letting go of expectations of her from both sides (her mother, who dies early in the film — this is a Disney movie, after all — as well as her nasty, surrogate mother of sorts, the Baroness) that Cruella can come into her own. When she does, she embraces the bad side she was told to hide, but she also tries to right things when an injustice is done.

To be clear, I’m not advocating that anyone be evil, in any way or form. But I do admire Cruella for being her fullest, truest self; for embracing her “star shape” and not forcing it to fit into a round hole. And what’s more, she looks fabulous doing it.