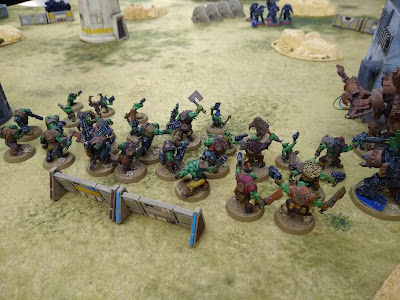 Crumpin' into a storm of steel 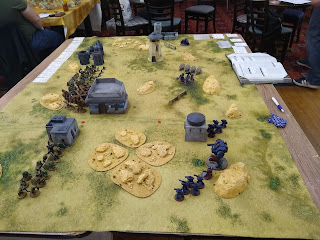 We randomized the Ransack mission and got set up. Matt was quite concerned about my Deffkopters so when I deployed them behind the building, Matt deployed a lot of his troops on his right flank, although my Kopters would be more vulnerable than I hoped this had a positive impact on the battle for me. 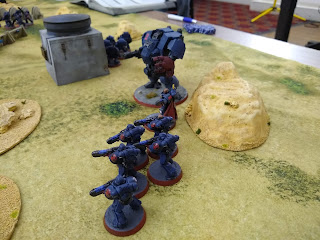 Matt won the first turn and opened up with everything, by the end of the first turn my ablative Grots and my right flank Boyz were gone and one off the Deffkopters was dead. I would not be advancing into that firing line. 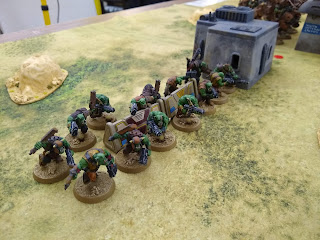 In my first turn everything went hide behind over, I would at least make Matt move to be able to unleash that firepower on me again, my Deff Dread was most advanced, hiding behind a building waiting to get the jump on the Assault Bolter Marines. In his turn, Matt moved up but was no longer in such a target rich environment. 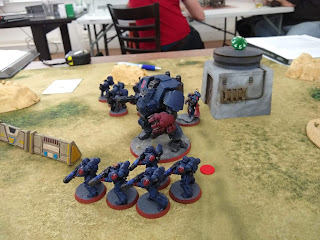 At the start of my turn I bagged fifteen points for the objectives, and called a Waaagh. The Deff Dredd lumbered into the Assault Bolter Marines and the remaining Boyz piled onto the Trike, by the end of the turn I'd mashed up two of the Marine units and extended the range to the other Marines. In his turn Matt shot up the Deff Dredd and caused some mayhem among the remaining Boyz but they survived. 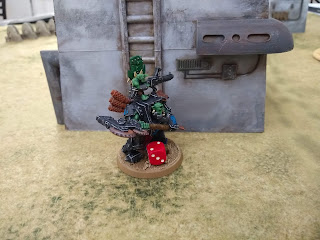 I spent the remaining turns hiding behind terrain from Matt's gun-line, but, having bagged fifteen points in objectives earlier and with Matt deploying in a position that was advantageous for shooting, but not so for scoring objective points I won the game in a most un-Orky way.
Source: scrivsland

Crumpin' into a storm of steel