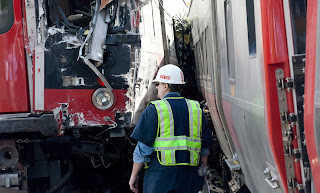 The FRA has issued a notice of proposed rulemaking (NPRM) proposing changes to rail integrity and track safety standards to allow railroads to conduct continuous rail testing, eliminate an exception granted to high-density railroads for visual track inspections, and make some other miscellaneous changes.  The NPRM was published in the Federal Register on December 31 and is open for public comment.

The most significant change being proposed by the nation's chief rail regulator would allow railroads to perform continuous rail testing.  Under the current regulatory requirements, when automated track testing is occurring (like the LIRR does several times a year with the Sperry rail testing car), an operator has to ride the vehicle and review the data in real-time as the data collects it.  If any suspected track defects are discovered, the vehicle stops and crews verify any possible rail defects, with a requirement that some types of defects be verified immediately, and all others within four hours (see 49 CFR 213.113(b)).  With continuous rail testing, the inspection vehicle can run over a segment non-stop, collect the information, and transmit it to an analyst (who can be in a centralized location, not necessarily on the vehicle itself), who reviews the results and categorizes suspected defects that have to be verified in person.  The FRA is proposing giving railroads more time to subsequently verify potential defects, i.e., between 24 and 84 hours, depending on the type of defect).

The proposed rule formalizes and standardizes a number of waivers that have been granted to railroads to use this type of testing on various track segments, dating back to 2008.  The LIRR has been using this type of continuous rail testing under a waiver from the FRA since October 2018 (docket FRA-2018-0031).  As part of seeking the waiver, the LIRR said they would increase its frequency of automated rail testing from twice per year to quarterly (not to exceed 90 days between tests) on all 503 miles of main track and controlled sidings.  Slow speed areas (speeds 15 mi/hr or less) that are not main track or controlled sidings are still tested once per year using traditional stop-start testing.  Under the new quarterly testing scheme, the tracks are tested using a rail testing vehicle at speeds of up to 25 mi/hr (which can be as much as twice the average speed of stop-start tests), and the data is transmitted and analyzed by technical experts from the rail defect testing contractor.

But less than a year later, the LIRR submitted a request to modify its waiver to walk back on the 90 day testing frequency, saying that the process "has been very labor intensive, with significant coordination required" and citing difficulties in scheduling tests to occur in 90 days or less amid timetable changes and outages for other projects.  So instead, the railroad requested an extension of the test interval to every 120 days.  The FRA granted this modification on Monday.  In its waiver modification request waiver, the LIRR said that "we have found continuous testing to be highly beneficial, particularly regarding the quality of the tests performed.  Though continuous testing, the amount of rail defects detected has increased significantly, and the size of the defects are smaller.  The result is a reduction in service breaks and disruption to our customers.  This ultimately reduces the risk to our operation and potential derailments to broken rails."  (although the railroad has not presented any quantitative analysis of how delays due to track defects have declined).


Metro-North requested a similar waiver to perform continuous track testing in August 2019 for their entire territory (docket FRA-2019-0057), pledging to continuously test their entire system at least 4 times per year (every 90 days) and that they would strive to test 6 times per year (about once every 60 days).  The FRA granted this waiver on October 9, 2019.

The formalization of continuous rail testing would be a good move, as it would give flexibility to railroads—especially busy ones like the LIRR and Metro-North—to test tracks faster in a manner that has less of an impact on service.  Because the test vehicle can move continuously, outage time can be reduced since time does not need to be budgeted to stop and verify potential defects, which means less of an impact on service, particularly in single track territory when buses have to substitute for trains when track testing is occurring.  Potential defects can then be investigated at later times that have less of an impact or no impact on service.  Increasing the running speed of tests also allows for railroads to test more miles of track with the same amount of resources, which means that defects can be found sooner, before they develop into problems that can impact train service or cause a derailment.

The FRA is also proposing to eliminate an exception granted to "high-density commuter lines" to the requirement that each main track be inspected by either vehicle or someone on foot at least once every two weeks (and sidings once per month).  The FRA is proposing to remove this exemption as part of the fallout from the May 2013 Metro-North Fairfield train crash.  The NTSB determined that the derailment was caused as it traveled over a pair of broken joint bars between rails.  The investigation found that while Metro-North inspected the track in the area two days before the incident, the inspection was conduced by an inspector on a high-rail vehicle from the adjacent track and so didn't see the joint bars in question.  Following the derailment, the NTSB issued Safety Recommendation R-14-11 recommending the FRA remove this exception.  The FRA is now proposing to move forward with eliminating the exception.  According to the NPRM, no railroads currently use this exception.

More frequent visual inspections are not a bad thing, and the LIRR and Metro-North already meet the requirements to test tracks every two weeks.  Though, of course, the mere frequency of inspection does not garauntee that the inspections will actually be done, as questions continue to swirl and a criminal investigation probes the events leading up to the derailment of two trains east of Speonk over Memorial Day weekend.  According to the railroad's records, the track circuit that was cited as contributing to the incident had been inspected about seven weeks prior, but FRA investigators were unable to verify that the test actually took place.  Sources told the New York Post that video evidence contradicted a signalman's claim on federal inspection forms that the physical tests were performed, and, as a result, allegedly failed to fail to identify the flaw in the signal system that led to the crash.  Further, the Post reported that the employee at the center of the investigation had already been suspected about lying about his work hours with a source saying "'[h]e basically made his own hours,'" and that "his no-work approach was an open secret among his colleagues". According to payroll records, Mr. Conklin made $61,101 in overtime payments during 2018 on top of his $95,668 base pay—increasing his earnings by 65%. He reportedly resigned on May 31, just days following the Speonk incident, after being confronted with the two sets of allegations.

The integrity of track and signal inspections continues to be a glaring open question with the LIRR, and it's an issue that railroad officials have yet to address publicly...

The FRA is also proposing changes to regulations related to incorporate longstanding waivers related to the use of heavy point frogs and flange-bearing frog crossing diamonds on Class 5 track, and several other consensus-based recommendations from the FRA's Rail Safety Advisory Committee (RSAC).
[This item appeared first on The LIRR Today.]