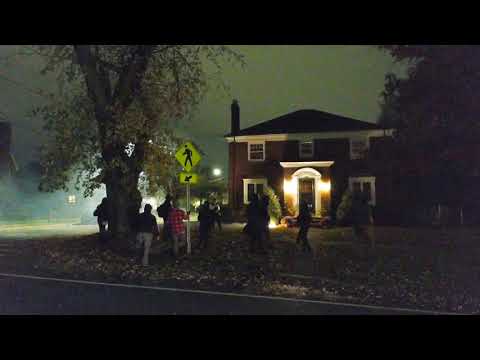 The noise demo was held in opposition to the City Council’s plan, as outlined in a recently passed resolution championed by Councilmember Ryan, to convene a new police academy immediately, increasing the number of police officers in Providence. The call for a new police academy comes at a time when activists have been been calling for defunding the police, and increasing funding for social services and policing alternatives.

In addition to no new police academy, the protesters were also calling for an end to the ATV Criminalization Act, reparations and police abolition.

After the serious injuries suffered by Jhamal Gonsalves while riding his moped and being pursued by police, many have been calling for alternatives to simply criminalizing these recreational vehicles, including finding safe venues for the use of these vehicles within the city.

The noise demo did not last long. Protesters made noise and set off fireworks on the lawn on Councilmember Ryan’s home. After the police arrived, protesters scattered and though police did seek to detain at least one protester, no arrests seem to have been made.

Will James has the live stream:

Councilmember Ryan issued a statement which read, in part, “…[w]hile they’re within their right to dissent with my public positions as an elected official, their trespass and use of illegal fireworks on my property did not adhere to the spirit of democratic debate but was instead meant to intimidate and coerce.”

Councilmember Ryan also pushed back against the idea that her resolution is simply about over 100 new officers to the Providence police Department.

“While my resolution also calls for the convening of a new police academy without further delay, the impetus isn’t because I think we’re going to arrest our way out of our problems, but because we’re currently at an all-time staffing low and we are at risk of losing so many officers due to retirements and infection from COVID. There are currently around 113 officers eligible to retire and we’re risking peace and security if we don’t replace them while we can.

“Abolishing the Providence Police Department is not the answer,” continued Councilmember Ryan. “However, building up our Police Department from within the community, creating community policing where residents know the men and women who serve their neighborhoods, designing a curriculum for officers so that they are more culturally aware and empathetic, and a social response component are affirmative steps in the right direction. Our approach needs to be collaborative and holistic.”

Here’s the Finance Committee meeting, which did not take up any subjects directly related to police funding.