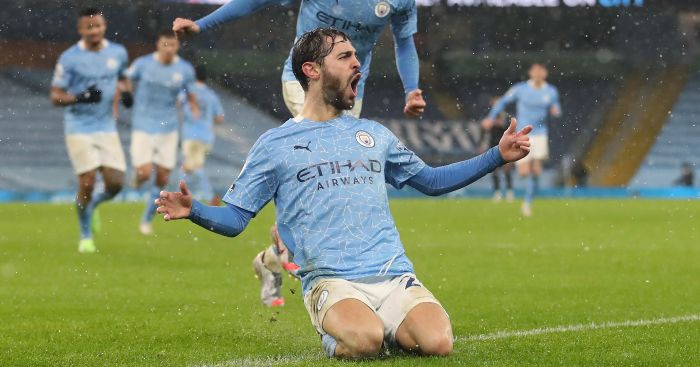 Manchester City rose to the top of the Premier League table for the first time this season as their persistence paid off in a 2-0 win over Aston Villa.

City have been making ground in the standings in recent weeks and finally returned to the summit after a free-flowing game.

Villa were in action in the Premier League for the first time since New Year’s Day, after a recent coronavirus outbreak at the club.

They made just one change from their last league lineup, with Ross Barkley returning to replace Anwar El Ghazi.

As for City, they brought three players back into the starting XI who missed their win over Crystal Palace at the weekend. Phil Foden, Joao Cancelo and Rodri returned.

City had the first big chance of the game as they put pressure on their visitors. The ball fell to Bernardo Silva at close range, but Emiliano Martinez made himself big to keep his effort out.

The hosts kept their momentum going as Foden weaved his way between opposition defenders, which led to a corner – although nothing of note resulted from that set piece.

Villa began having some more threatening moments of their own, but were lacking quality with the final ball on a couple of occasions.

Most of the action was heading in the opposite direction, though, and City created another chance when Kevin De Bruyne was teed up – only to see his shot blocked by Tyrone Mings.

At the other end, Villa became a touch more confident, with Barkley curling a shot into the palms of goalkeeper Ederson.

The last big chance of the half fell to City, when De Bruyne expertly fired a pass across for Foden. However, his shot was blocked to keep the game goalless heading into the break.

There was almost a chance for Villa to break the deadlock early in the second half, when Bertrand Traore beat De Bruyne down the wing before seeing a tame shot saved.

What a touch from Bertrand Traore!

He left De Bruyne in the mud

City then went the closest yet as Cancelo struck the crossbar with a rising effort.

There were a couple more goalmouth scrambles at the Villa end, but once again there was no way through a crowded area.

City had Ruben Dias to thank for a crucial intervention when he diverted a Villa cross away from goal, as the away side began to up the pressure.

But it was the hosts who finally broke the deadlock in the 79th minute. Rodri fed the ball to Silva, who took it away from the defenders into a pocket of space and sent it flying in with his left foot.

Finally, we have a breakthrough!

Some great chances for both sides this evening, but Bernardo Silva is the one who breaks the deadlock!

It marked Silva’s first Premier League goal of the season – and he could not have got off the mark in much better style.

Villa boss Dean Smith was sent off in the aftermath. There were claims of offside in the buildup, which will have been what he was complaining about.

City could have had a second goal when Cancelo fired towards goal, but Martinez pushed it away.

Moments later, they did have a second. The referee pointed to the penalty spot when the ball hit Matty Cash’s hand after a Gabriel Jesus header.

Ilkay Gundogan powered the ball home to make it 2-0 and confirm the result.