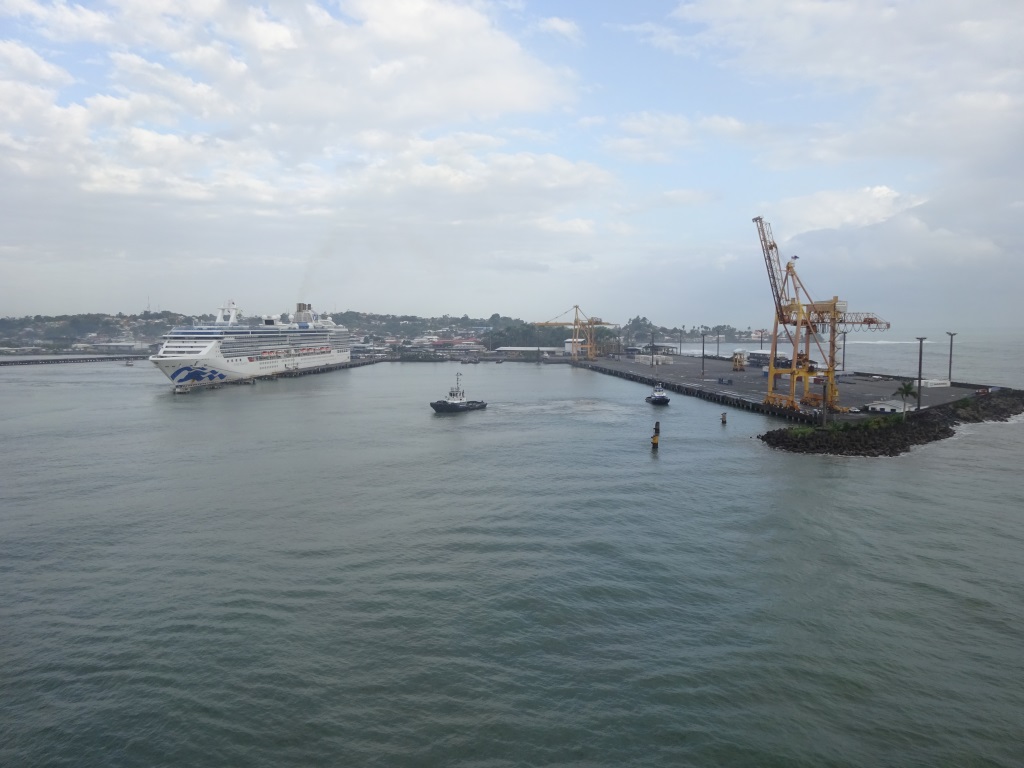 Every time we approach Puerto Limon, there is certain amount of tension on the bridge. What is the angle of the swell into the port? We know how high the waves are as the surf forecasts are quite reliable. But what rolls into port is another question. Today the forecast was 2.8 meters or almost 9 feet and that is way too much to have to go safely alongside with. It would mean that the gangway would also go up and down by that much. But the docks are protected by a stone breakwater and thus it all depends on what the angle is. Will the breakwater block everything, will some of the swell curve around it, or is the angle just plain wrong and the docks are getting the whole 9 feet.  And if so, that would mean we are out, and we would have to disappoint 900+ guests who all want to go on the Eco-tours.

So the whole bridge team is focused. (And downstairs in his office the Hotel Director is sitting behind his desk and dreading the phone call from the Captain with the nasty words” we are staying at sea and keep them happy with an alternative program”) The Island Princess who was with us again in the Panama Canal and she seems to like to arrive first; and thus we can follow that ship on the radar and see what it is doing. If she is pulling out, then we can start to prepare ourselves mentally for a sea day. We still will have a good look as the assessment of each captain is different, as each ship is different, but indication 1 is then there.

Sailing into Puerto Limon. Very little wind but a long low swell running in.  But not so much at the dock. You can see the wash from the thrusters of the Island Princess used for keeping the ship tight alongside the dock.

The Island Princess did go alongside but when we came in we saw that she had all her thrusters blazing away to keep the ship alongside and by doing so keep the ships movement under control. So we did the same thing. And for the remainder of the day we kept the thrusters and the outboard Azipod going to glue the ms Zuiderdam alongside and kept the gangway movement down to almost zero.  In the port there was about 2 feet running and that we can easily control with “glue the ship against the dock maneuver”. We were docked by 07.15 and at once 900+ eager ECO tourists started to roll off the ship to see monkeys, sloths and other jungle life in the National Parks of Costa Rica.  We heard on their return that a. it had remain dry and b. wildlife had been out in full force and everybody had seen something.  As usual we sailed late as that is the one thing that does not seem to work very well in Costa Rica and that is a timely return of the coaches. As mentioned in a previous blog, I think it is the “creative driving” of the locals.

While the Zuiderdam facilitated a jungle invasion, the crew was once again engaged in drills.  This time the focus was on the weekly fire drill. We have to conduct a weekly one as per SOLAS regulations but luckily we are allowed to be creative in how we do it. When I am on board a ship, they ships management is normally more than happy to let me use my creativity and come up with one of the “Captain Albert Specials”. A drill which has a few elements that nobody expects. 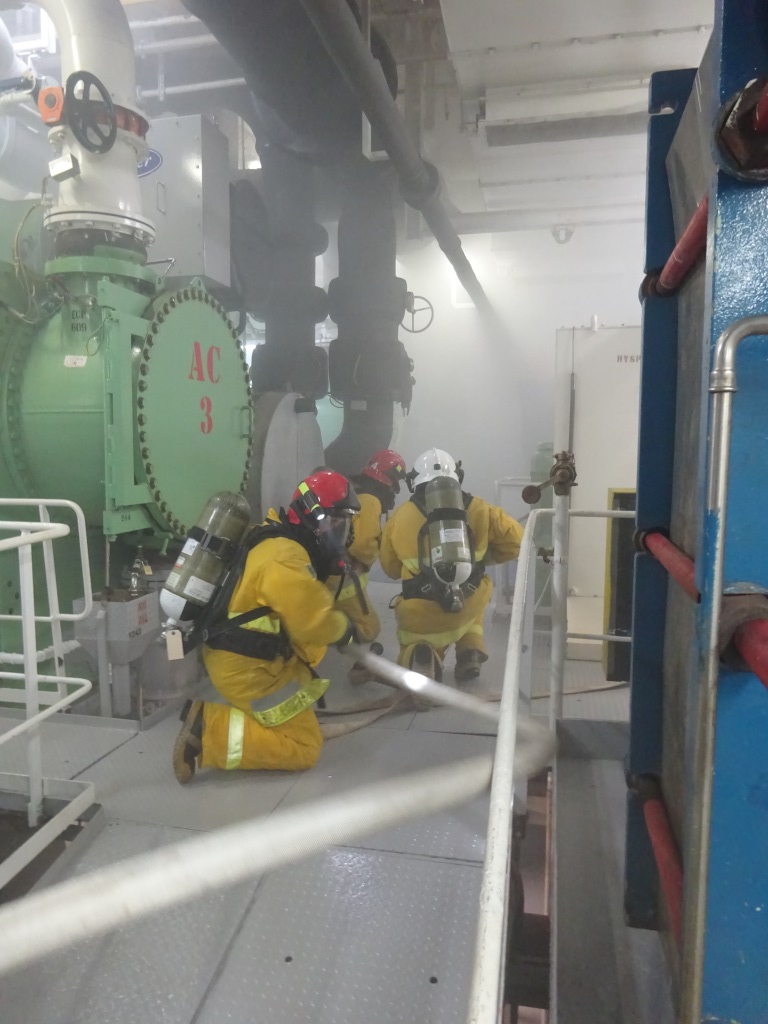 The assessment party in the AC Room. the grey smoke would normally be black. The ventilation blowing in is still keeping the smoke at bay and the fire team is assessing if it is safe to go into the smoke. Ahead of them is 30 feet more of engine room with (simulated) fuel oil full ablaze. Mr. D Ummy is somewhere in there.

Today I had a challenge on my hands as we had to conduct a CO2 drill. This means that CO2 is needed to extinguish a major fire in the engine room.  The chief engineer would never allow me to do it for real so it was hard to make it look real in such a very large space. But that is the simple challenge.

The big one lies with the Captain and the Chief engineer. The law and reality stipulate that if there is a major engine fire, then there is only a 10 minute window between the occurrence and the CO2 protocol for release being initiated. If you wait longer then the effectiveness of CO2 gets less and less as it only replaces oxygen but does not cool down. The hotter the space, the less chance of the fire going out, and the bigger the chance of a flare up. And we only have enough CO2 (over 62 bottles of it) for one attempt. 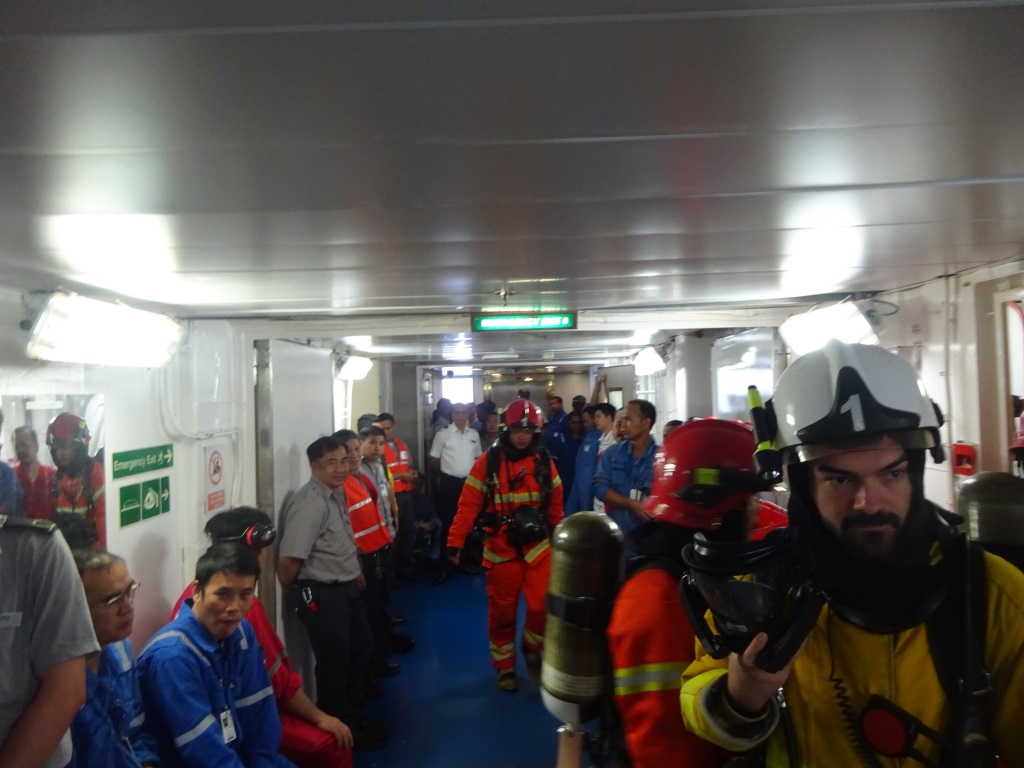 Roll Call. The Chief engineer has called everybody out. There are roughly  30 crew in the Engine room during day time and when the fire parties go in it goes up to about 70 when including the support teams. Now they all have to be accounted for, before CO2 can be released and we only have 10 minutes.

The 2nd challenge is that we really need to have everybody accounted for. E.G.  the engine room completely evacuated.  CO2 is lethal as it replaces oxygen and thus we have a roll call for all engine room personnel and outside contractors to report and be checked off.  Today one of my nasty tricks was to put the AC room (Where the Machines are for the ships air conditioning) on fire and have a person, Mr. D Ummy succumb in the smoke.  The visitors log says he is still inside the E.R but he is not coming out during roll call. We have the 10 minute limit so we cannot send a 2nd fire team down after the first one has assessed the situation too dangerous.

So what is the advice of the CE and what is the decision of the Captain ?  Apart from the procedures and protocols, that is something that will make the decision making process very difficult.  It then all boils down to the knowledge of the area, assessing severity of the fire where Mr. D Ummy is expected to be and the chance is of his survival because of it.

Tomorrow we are at sea.  As you can see from the weather map, there are some dark spots of clouds and that means we still should get a chance of rain tomorrow and then it should clear. There is a weather front laying over the Gulf of Mexico and that might influence the weather in Fort Lauderdale or not. 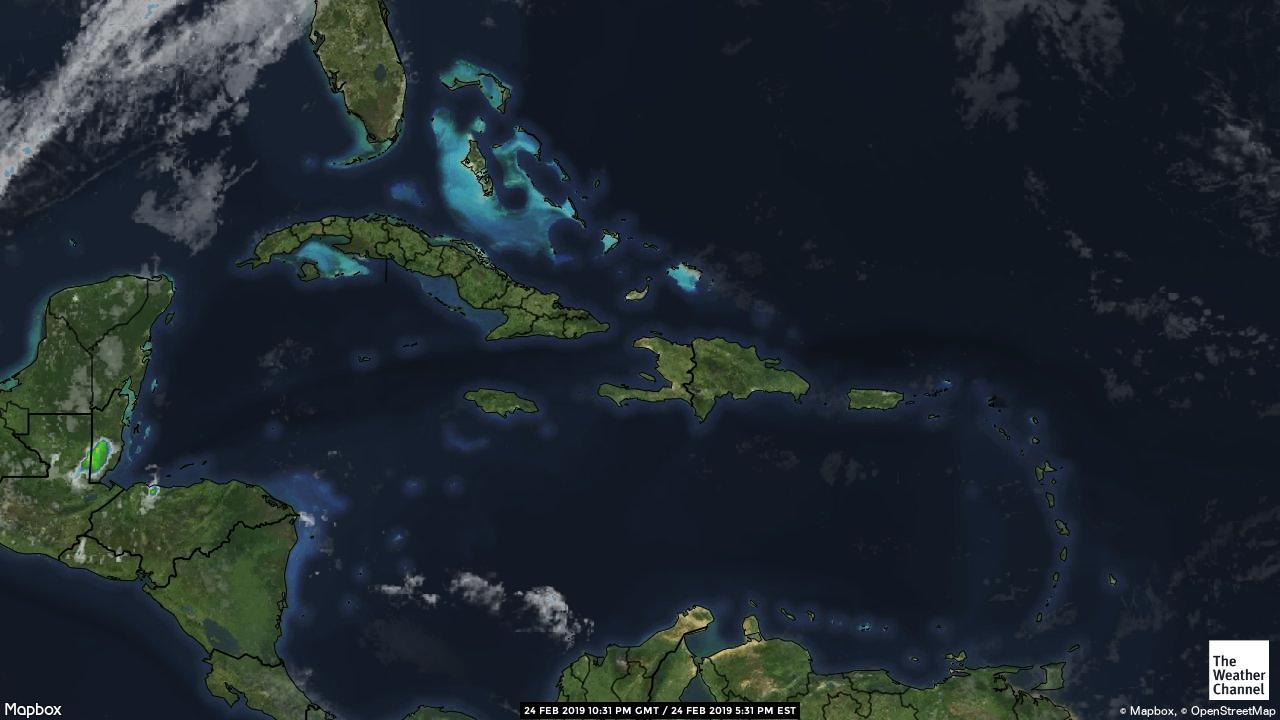 Weather in the Caribbean today. It looks all clear but there are these grey smudges everywhere. That is rain.  We got some on the ship but the rain forest stayed largely dry today.