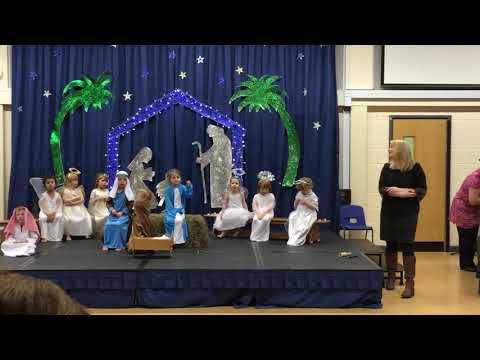 A carol a day: Away in a Manger

This the third in our series about Christmas carols. It was first published on December 5, 2018.

THE first carol that most of us learned must be Away in a Manger, a staple of school nativity plays. With that in mind I set out to find a typical performance on YouTube. I found some lovely ones, including here

I stand in awe of the teachers who keep such productions on the rails. I did notice, however, that as much as I searched the children were predominantly white, which suggests to me that reports that nativity plays are being phased out for fear of offending non-Christians may be correct.  Another cultural pillar being chipped away, as well as an early taste of stardom for tinies and a source of joy for proud parents.

The origins of Away in a Manger are not entirely clear, but the first two verses emerged anonymously among the American Lutheran community in Pennsylvania and were published in 1885 in Little Children’s Book for Schools and Families. The third verse appeared for the first time in Gabriel’s Vineyard Songs (1892). The connection with Lutherans led to the belief that the song was composed by Martin Luther (1483-1546), the German church reformer, but this has now been discounted.

Some theologians, presumably with time on their hands, have suggested that the line ‘the little Lord Jesus, no crying he makes’ is heresy, suggesting against church teaching that the baby was a super-infant whose divinity overshadowed his humanity. For this odd reason it is not included in all hymnals.

In Britain the melody used is Cradle Song by the American composer William J Kirkpatrick, and was first published as part of an 1895 collection called Around the World with Christmas as a representative of ‘The German Fatherland’. There are at least 40 more musical settings.

Here is the choir of King’s College Cambridge in 2010 in an arrangement by Stephen Cleobury, who was their director of music from 1982 until shortly before his death last year at the age of 70.

In America the carol is sung to a tune known as Mueller, probably written by James R Murray in 1887. Here is a version by the wonderful Bing Crosby.

Finally, while updating this article yesterday, I found this lovely version which I believe is a 1911 arrangement by Reginald Jacques of an old Normandy Carol. Here it is performed by the King’s Men, Cambridge – the choral scholars of the Choir of King’s College, Cambridge – last December.

The post A carol a day: Away in a Manger appeared first on The Conservative Woman.

A carol a day: Away in a Manger