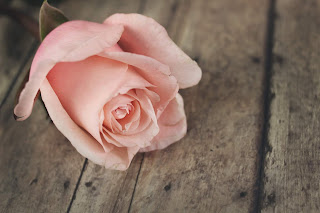 One evening recently, Master came home from work with a single pretty pink rose, which mouse placed in a pretty bud vase that is rarely used anymore. Later that evening, right before bedtime, Master had her bend over the counter and probed her rear hole, He deftly inserted the medium plug and asked how it felt. He wanted details that went beyond "It feels fine." Then He gave it a few turns, removed it and replaced it with the large glass plug that protrudes and doesn't allow for sitting. He planted a gentle kiss to the back of her neck and asked if she understood what this means.
Suddenly mouse fell headfirst into the deep end of the pool, realizing that this changes everything. No more being allowed to sit, standing, kneeling are fine but sitting won't be allowed anymore.
The next morning Master removed the plug, filled the enema bag and for the first time in a while administered an enema to His slave. That process is humiliating, although it probably shouldn't be. He looked at her ass hole when it was finished, and replaced the large glass plug. Naturally mouse thanked Him, and felt incredibly overwhelmed with all sorts of emotions. The corset won't be returning. In the shower He did require that kneel, drink His piss and wash His lower body. Then He turned the water to barely warm and allowed the slave to continue washing herself and her hair. The damp towel was left for her to use when she finished.
"Such a good slave." He clucked.
Kneeling mouse took His cock into her mouth and throat, opening herself up to His use, and giving up herself to Him in the process. It was a renewal of our relationship and a reminder that even if He isn't going to correct mouse in a corporal way any longer, He is still Master. Our relationship isn't a game sometimes played, or anything that ends with our bedroom door. It's a living, breathing thing that defines the core of us.
That first afternoon when He returned to His home after work, He called mouse to Him and removed the large plug, had her clean it and put it away from prying eyes. It would be returned in the evening before bed, but not before her ass was filled with His seed. It was of a relief to be able to sit at least a little, at dinnertime, and after the chores were completed, beside Him on the sofa, with slave sort of leaning against Him as He read for work.

Master asked for mouse's phone and unlocked it (didn't know He could do that), and turned on a tracker. This way, He explained He would know where mouse was during the day. If she leaves the house for any reason, His phone notifies Him, when she returns home, and will give Him a list of every place she stops at in between (if He wants to see that). It didn't feel invasive, it actually felt right when He activated it. Then Master explained that His phone was connected a similar way, so the slave's phone will notify her when Master is within a few blocks from home. He wants His slave to be more service oriented for Him. Lately, He's shocked her or even frightened her a few times with His return home. This will let her know when He's nearly home so she can prepare herself.

If He asks her to take something and leave it in His car, the phone will tell her where the car is parked so she can do that. There have been times where He has asked her to do this although rare.

Now, she doesn't need all His movements throughout the day, at least in the same way the way He needs to know about mouse, but it will come in handy when He's working later than usual or has a late meeting. Why hadn't we ever thought of this before? It's ingenious. There's also something nice about it being reciprocal, which honestly mouse would never have suspected or thought about before. Master wants mouse to know and this helps her better serve Him.

Will she still have to text Him? Of course He replied but on those few times that she forgets or if the text doesn't go through due to a malfunction or stupidity, He will still be able to track mouse, which would eliminate His own worries. That's what this is really about, since Google already knows everything we do, honestly something we both find slightly creepy, why not use this so we know too?

Serving Master and being more useful to Him is a key for mouse nowadays. After mouse was in the hospital it has been a struggle to find her footing again, probably longer than it should have taken. The medications certainly have helped mouse with that heavy weight of depression that she felt. Master is quick to remind none of that was her fault, just a long list of problems that was out of His or her control. Now we're back, much more settled and the time has come to resume what we can.

It feels so natural and for the most part simple and yet this is far more complex as well than we had before. Before the slavery was different, more private in a strange way, or perhaps it just felt different? Master would control mouse mostly through corrections, painful ones. Since the surgery physical punishment is out, Master won't risk it and He still remarks how fortunate we both were that He hadn't followed through with His plan to punish mouse earlier.

Master feels better now about the recent past and accepted the lessons He and mouse have learned from this experience. Our recent evolution is a demonstration of that and that something incredibly positive can come from such hardship.

Now, we're looking forward to this time of rebirth. Springtime is perfect season for this and it's coming!
Source: aslavestale