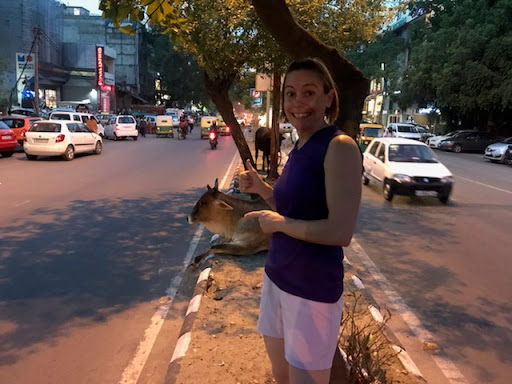 Most of us have heard that cows roam freely in India.  As an outsider, this was hard to picture.  How could there be livestock milling about throughout the country?!  Turns out the answer is: very easily. 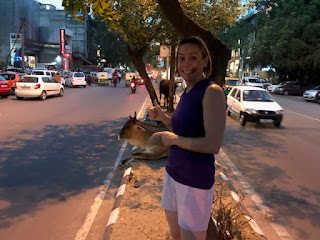 Cows are a constant feature on the busy street just one block from my house.  Often they are chilling in the median, as pictured above.  Sometimes they are ambling along next to the cars.  There is almost always a small herd gathered at the main intersection into my neighborhood, kind of like a group of teenage boys standing outside the corner store.  Occasionally, cows are sitting right in the road.  I chuckle when some drivers honk their horns, as if the cows know that means to move out of the way, but most cars simply move quietly around them. 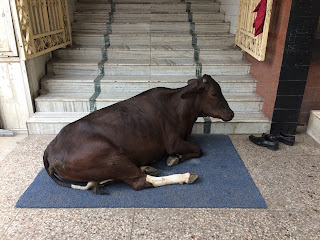 There is a particular route between the embassy and my house that we call Cow Alley.  It involves wending through narrow roads and maneuvering tight turns around people, vendors, other vehicles, and cows.  It's an amazing introduction to the bustle of Delhi for a new arrival.  I tried to get a picture of it, but my attempts always resulted in a blurred kaleidoscope of color outside the passenger window.  Instead, while walking in the vicinity of Cow Alley one day, I got the above pic of a Welcome Mat Cow! 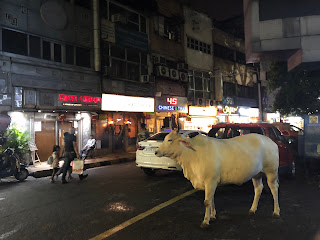 I regularly see cows in my neighborhood market.  In the above picture, a white cow was standing still in the middle of the parking area, with the customers and neon lights of the market around her.  I wondered if she was asleep because she remained perfectly still the whole time. 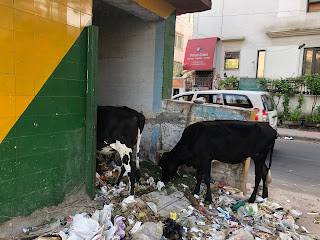 Dumpsters are another common haunt of cows.  We all gotta eat.  And even though Hindus believe cows are sacred, most of the cows on Delhi's streets are essentially strays who survive on scraps. 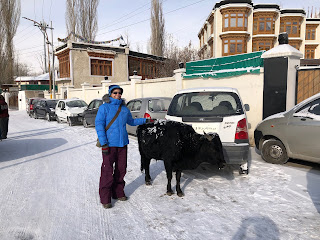 Cows are not limited to Delhi.  I've seen them in most of the cities I've visited, including in the cold, snowy, northern city of Leh in the foothills of the Himalayas.
Source: internationalcover