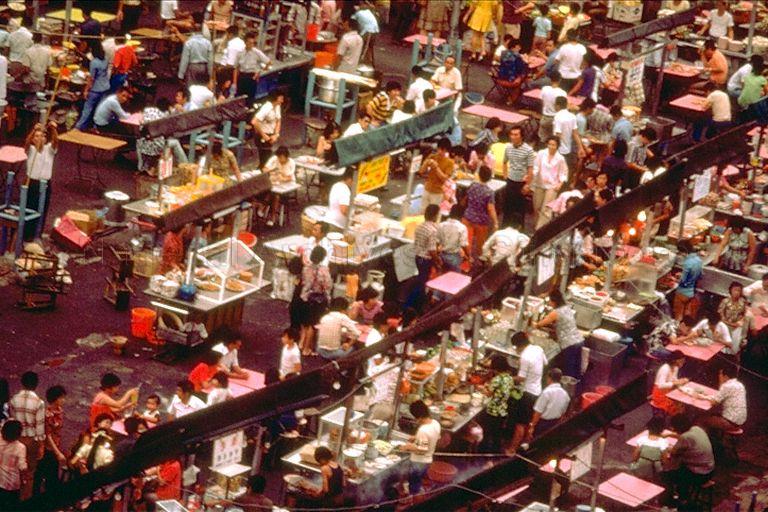 Films containing familiar sights and sounds of the past have a wonderful effect of evoking feelings of nostalgia and a sense of coming home. Such was the case when I was provided with the opportunity to view a selection digitised 8mm home movies from the 1960s and 1970s that have been deposited in the National Archives of Singapore with a view to putting together segments of them in preparation for last Thursday’s “Archives Invites” online session “Days of Wonder: Fun and Leisure in 1960s and 1970s Singapore“. The session involved the screening of two videos, each containing scenes of the Singapore I was familiar with as a child, with a focus on sites, attractions and leisure activities that were popular among Singaporeans.

Among the activities that I put a spotlight on in the videos were those that took place by the coastal areas, which included scenes of Changi Beach – an extremely popular spot for picnics and dips in the sea at high tide – complete with kelongs in the near distance. Changi Beach, a regular destination for picnics right out the boot of the car (we could once drive right up to the beach), was where I first took a dip in the sea. The beach and the long sandy coastline that ran all the way towards Bedok, featured in many weekend outings and holidays through much of my childhood.

It was the same for many in my generation. Changi Beach was often the place to chill out at during the weekend, especially when the timing of the high tide was favourable, which a quick check on tide tables published daily in the newspapers, could confirm. A friend of mine recounted how she looked forward to trips to Changi on the back of a borrowed lorry with the extended family whenever the timing of the tide was good. Pots of chicken curry and loafs of the local version of the baguette would also accompany the . If you were fortunate to have come with a car, there was also the option of driving right up to the beach and parking right under a shady tree to have your picnic right out of the car’s boot. Seeing cars with their wheels stuck in the sand was a pretty common sight because of this. And, if the chicken curry ran out or if one had come without food, there were several beachside cafés that one could visit. There was also the option of waiting for the fish and chips van, and the various itinerant food vendors that also visited the beach throughout the day such as the vadai man, the kacang putih man and the ice-cream vendors.

A small part of the segment on the coast, involved a holiday, taken locally by the sea – as was the fashion back in days when most of us could not afford to take a trip abroad. For me holidays involved the various government holiday facilities along the Tanah Merah coast, at long lost places with names like Mata Ikan and Ayer Gemuroh. A question that was put to me during the Q&A session was what do I miss most of those days. Mata Ikan, the Tanah Merah coast, and also how we seemed to have unlimited access to much of the length of Singapore’s coast, is probably what I miss most. Those were wonderful times for me, walking by the beach and along stretches of seawalls, poking my nose into the numerous pillboxes that lined the coast (boy, did they smell!), wading out when the tide went out, often as far as the kelongs were planted. The coastal regions are much more protected these days and in many parts, blocked off from the public.

Beside my interactions with the Tanah Merah coast, there were many other places in SIngapore that left an impression. I remember how places would come alive by night, as the scenes of an Orchard Road and Guillemard Circus illuminated by neon advertising boards seen in the videos show. Singapore had such a wonderful glow by night with the numerous fountains – many planted on the major roundabouts, also illuminated by night, and the occasional float parades and light-ups during National Day, often adding to the night lights. Adding to the lively scene by night were what would be termed as “pop-up” food centres. Several open-air car parks, such as the famous one on Orchard Road where Orchard Central, transformed themselves into places to indulge in some of the best hawker fare that could be found in Singapore.

The one at Orchard Road, dubbed “Glutton’s Square” to provide it with greater tourism appeal, was an assault (in a pleasant way) on four of the five the senses. Evening time brought with it the disorderly rush of pushcarts, all of which would somehow be lined up in neat rows in double quick time. Lit by kerosene lamps in the dark, each contributed to the smoke that filled the air together with an unimaginable array of aromas. The sounds of the ladles scraping the bottoms of woks added to the atmosphere. Besides Orchard Road, there were also carparks at Prince Edward Road opposite the Singapore Polytechnic and the one in front of the railway station at which hawkers similarly gathered by night.

Among the other scenes were those of Orchard Road, which was in the 1960s, a place to perhaps shop for cars, to visit the western style supermarkets, which were uncommon then, and perhaps C K Tang. C K Tang, a pioneering departmental store on Orchard Road, was then housed in its rather iconic Chinese-roofed building and right nearby was Champion Motors on which Lucky Plaza now stands, Fitzpatrick’s Supermarket and Orchard Motors. The conversion of Orchard Motors into The Orchard – a shopping centre at which the infamous Tivoli Coffee House was located, possibly marked the beginning of the end for Orchard Road’s motoring days. There are perhaps two reminders left of those days, in the form of Liat Towers – built as a Mercedes Benz showroom and headquarters, and the delightful sunburst topped former Malayan Motors 1920s showroom that can be found opposite Dhoby Ghaut MRT Station.

Another of my favourite urban sites was Change Alley, which many locals – my grandmother included – seem to pronounce as something that sounded like “Chin-Charlie”. It was such a joy to wander through the alley, which in the late 1960s was filled with the sounds of the chorus of laughing bags being set off. The alley, which also provided correspondence between Collyer Quay and Raffles Place, was described by the BBC’s Alan Whicker in a 1959 newsreel as being “perhaps the most famous hundred yards in Southeast Asia”, a hundred yards of alley where one risked being “attacked in the pocket book”.

During the rather lively Q&A session at the end of the Archives Invites session, I believe that in view of the limited time we had, a number of questions posed went unanswered. Should you have been in that audience, and did not receive answers to the questions you may have posed, or have questions to which I was not able to adequately answer, you may leave them as comments to this post. I will try answering them as best as I can.